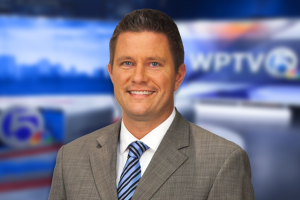 Born/Raised:
Born in St. Louis, Missouri and grew up in Hermann, Missouri.

Education:
Graduated with a broadcast journalism degree from Temple University

Since elementary school, Mike knew he wanted to be a television reporter. After graduating high school, Mike enlisted in the United States Navy. He served four years aboard the USS McFaul as an Information Systems Technician. Mike deployed with the USS McFaul to the Mediterranean and Adriatic Seas.

After his Navy service, Mike graduated from Temple University with a broadcast journalism degree.

He reported for two years at WBNG-TV in the upstate New York city of Binghamton. His flood coverage in 2006 helped contribute to the station’s award by the New York Associated Press for Best Continuing News Coverage.

Mike then reported and fill-in anchored for three years at WBRE-TV, the NBC affiliate for Wilkes-Barre and Scranton, Pennsylvania.

Mike is proud to call South Florida his home.

An avid sports fan, Mike’s cheers for his home teams: The St. Louis Cardinals, Rams and Blues….and of course the Temple Owls!