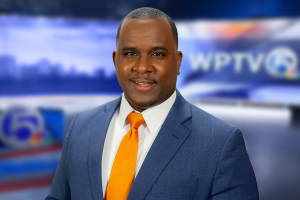 Kamrel Eppinger is an award-winning journalist from Miami.

He started his on-air career in the Mountain State of southern West Virginia. During his tenure, he won the award for best coverage of breaking news from the West Virginia Broadcasters Association. He worked as a general assignment reporter and weekend anchor, reporting extensively on the heroin and prescription drug epidemic, the controversial Mountain Valley Gas Pipeline project and the catastrophic 1,000-year deadly flood.

Prior to joining the WPTV family, he worked as a reporter for First Coast News in Jacksonville. While there, he launched and hosted a weekly food segment, "First Coast Foodies," providing viewers a behind-the-scenes look at some of the best locally owned restaurants and food trucks around town.

Kam earned a bachelor's degree in broadcast journalism and theatre arts from the University of Miami. (Go 'Canes!)

While in college, he was hand-selected and given the distinct honor to work as a multimedia journalist in Washington at The Scripps Howard Foundation Wire.

He is a member of the National Association of Black Journalists and a member of Kappa Alpha Psi Fraternity Inc.

Kam enjoys mentoring youth, as well as serving as a career coach to those individuals with a paralleled passion. He is committed to providing essential tools and techniques necessary in their quest of becoming effective and successful in this industry.

When he’s not in front of the camera, you can catch Kam trying out the newest food hot spot, spending time with family, his dog Kody and cheering on the Miami Hurricanes.