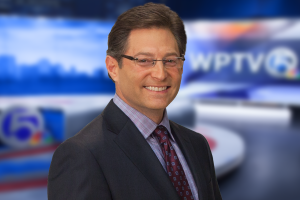 Education:
Northwestern University with a degree in Radio-TV-Film

Broadcasting has been in Jon's blood since he was a kid. Starting at age 9, he would record his own newscasts, using his younger brother as an "on-the scene" witness. In high school, he hosted his own music show on the campus radio station, and was the play-by-play voice for the school's football games. Moving on to college, Jon broadcast dozens of Northwestern University athletic events from football to baseball.

Since moving to South Florida, Jon has won several broadcasting awards and covered many of the biggest stories in the area from the field, and on the anchor desk, including the Presidential election of 2000, the aftermath of the anthrax attacks, and the hurricanes that roared ashore in 2004 and 2005. Jon has also been very involved in the community, hosting a number of charity events for groups as diverse as the Leukemia and Lymphoma Society, Children's Place at HomeSafe, and Hearts and Hope.

Jon lives in Palm Beach County with his wife and two children. When not on television, you might find Jon out at one of the area's great restaurants, at the gym (working off the previous night's meal), or on the golf course (hopefully out of range of his inaccurate driver!)