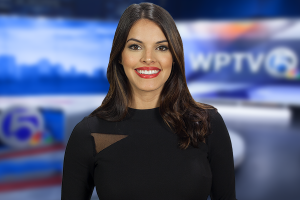 Janny Rodriguez joined WPTV news team as a multimedia journalist for the morning show in August of 2018.

Janny is thrilled to back home in South Florida where she grew up. She came to WPTV from WTLV First Coast News in Jacksonville. Prior to that she worked as a reporter and anchor for two years in the peach state, Augusta Ga for WAGT NBC 26.

But even before Janny stepped foot in the United States she and her family embarked on a journey to the land of the free from her country of origin, Cuba, at the age of eight. They moved to Miami to start her new life in a free country.

Janny graduated from the University of Florida with a degree in telecommunication-news and a minor in Spanish. During her sophomore year Janny began doing radio news in Spanish for Florida’s 89.1 WUFT FM, “Noticias”, the only news outlet for the Hispanic community in Gainesville. After two semesters reporting and co-hosting the program, she realized she had a passion to serve her community and it was then she got involved with television news.

Prior to graduation in May of 2013 Janny was awarded the Major Garland Powell Award for outstanding contribution in radio and television.

Janny also interned at Univision Network in Miami and is a member of the National Association of Hispanic Journalists.

Janny wants to thank our viewers in Palm Beach County and the Treasure Coast for their warm welcome and encourages your input with any story ideas you’d like her to cover. Please email her at Janny.Rodriguez@wptv.com, you can also follow her on Twitter @JannyReports.