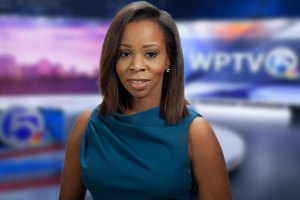 Wake up with Hollani Davis every weekday morning. You can catch her anchoring traffic on "Today on 5" on WPTV and also anchoring the news of the day from 7 a.m. to 9 a.m. on WFLX FOX 29. Join her again for a full hour of news on "Today on 5" at 11 a.m. on WPTV.

Hollani came to the Sunshine State from Virginia nearly four years ago. There, she anchored the evening newscasts. During her nearly eight years at WDBJ7 in Roanoke, Virginia, she covered the Virginia Tech shootings in 2007. Assignments also took her to Washington D.C, to cover President Obama’s first inauguration as well as other high profile newsmakers.

Hollani has won several journalism awards during her tenure including an Emmy for anchoring ‘Best Newscast’. She caught the journalism bug at the age of 7 when she toured the CNN center in Atlanta while on summer vacation with her family.

Hollani began her career at KTXS in Abilene, Texas. She is a proud graduate of Hampton University.

Originally from Las Cruces, New Mexico, Hollani is very happy to call West Palm Beach home. She and her husband, who is in law enforcement, don't have much downtime with a new baby. They also have a 15-year-old who keeps them on the go.

Hollani belongs to Alpha Kappa Alpha Sorority Incorporated and is a member of the National Association of Black Journalists. In the past she has volunteered with Bella’s Angels in Palm Beach County as well as the Boys and Girls Club and Big Brothers Big Sisters. You can often catch her emceeing community

Be sure to learn more about Hollani and get a glimpse of her life by following her on Twitter at @HDavisWPTV and Facebook! You can also email her at hollani.davis@wptv.com.