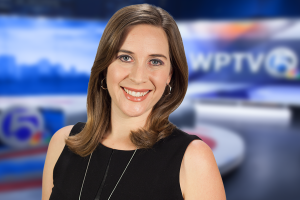 Emmy award-winning journalist Stephanie Susskind joined the WPTV news team as a reporter for the morning show in September 2016. She is thrilled to be back in her hometown, working for the station she grew up watching.

Stephanie was born and raised in Boca Raton, and knew she wanted to go into broadcast journalism when she started doing the morning announcements at Sandpiper Shores Elementary School. She continued to follow her passion at Loggers' Run Middle and Spanish River High School, before attending the University of Florida. She even interned at WPTV one summer while in college. She is a proud Gator fan and graduated with highest honors with a Bachelor's Degree in Telecommunications and a minor in Education in 2008.

After college, Stephanie's first job was in Macon, Georgia, where she worked for WMAZ-TV for 3 1/2 years. She started as a reporter, then anchored the morning show while learning the southern charm of Central Georgia. During her time in Macon, Stephanie was awarded an American Flag for her coverage of the local National Guard Unit's deployment to Afghanistan.

In 2012, Stephanie made her move back to the Sunshine State to work at WINK-TV in Fort Myers. She reported, anchored and even did some traffic reporting during her 4 1/2 years there. In 2015, Stephanie was named a finalist for the Florida Associated Press Broadcasters Individual Achievement Award. While working at WINK, Stephanie met her husband Matt, who also works in the news business. They are very happy to now call South Florida home.

In 2019, Stephanie won a Suncoast Regional Emmy Award in the Health/Science category for her coverage of a groundbreaking medical treatment in South Florida that can help patients of Parkinson's Disease. She was also the recipient of a Florida Associated Press Broadcasters Award in 2018 for a feature story about the legacy of a police K-9 officer.

Stephanie has a passion for telling stories, and hopes they can inspire and encourage viewers at home. When she's not reporting the news, Stephanie enjoys spending time at South Florida's beautiful beaches, watching movies, and spending time with family and friends, especially her adorable son Miles.

Stephanie would love to hear from you! If you have stories ideas, comments, or just want to say hello, you can email her at Stephanie.susskind@wptv.com.