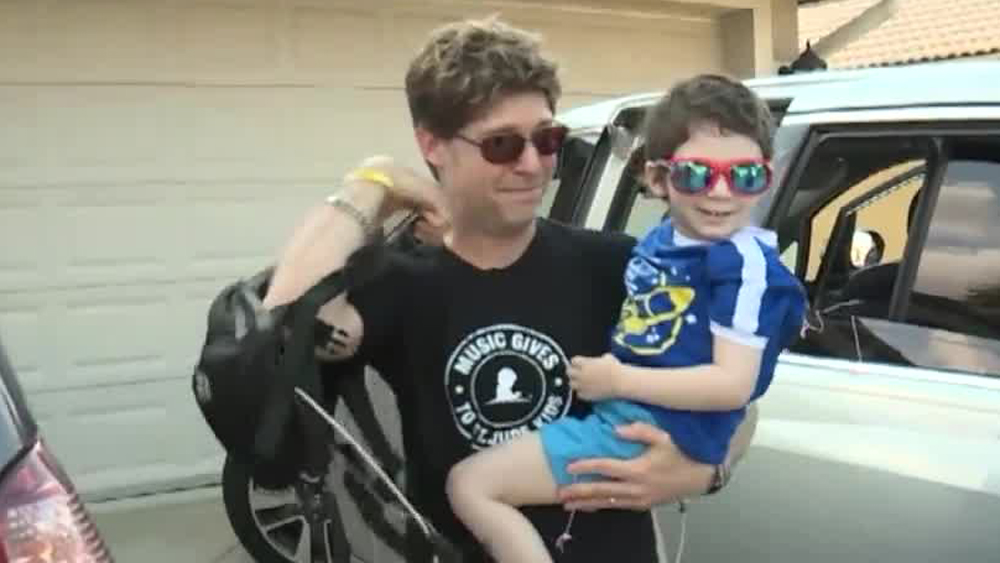 SUBURBAN LAKE WORTH BEACH, Fla. — On Monday, a normally quiet neighborhood in suburban Lake Worth Beach was filled with balloons tied to mailboxes, hand drawn signs, a Palm Beach County Fire Rescue firetruck, dozens of police cars and two SWAT vans -- one from the Palm Beach County Sheriff’s Office and another from the Boynton Beach Police Department.

The streets were lined with neighbors, who are all watching and waiting.

“We’re freaking out the neighbors,” said Sheryel Aschfort to one of the deputies with a chuckle.

She was eagerly waiting for her son’s family, the Bushmans to come home.

“Matthew hopes that he can make a new friend,” said Ronnie Krupin about her young son, who also lives in the neighborhood.

“We’re just happy for the family,” she said about the Bushmans, whom she’s never met.

This wait has been worth every second.

“The biggest day of my life,” Sheryel said.

“Emotional, this is insane, this is amazing!” said Calrita Carrillo, who used to live next to the Bushmans before they moved a few blocks away.

Thomas Nolf said holding up his sign, who also lives in the neighborhood.

Slater Bushman was just 4 years old when he left Palm Beach County with stage 4 neuroblastoma. He went with his older brother, Sawyer, mom Shari and dad Shane to Memphis, Tennessee.

“My grandson is coming home after 14 months at St. Jude Children’s Research Hospital, and he is cancer free, in remission,” Sheryel said.

He’s back with a superhero’s welcome.

He’s also back with a wise big brother.

“Sawyer you’re a hero too, we’re here to welcome home the entire family, but Sawyer, Slater could not have done this without you,” Heather said.

Ronnie Krupkin came out to watch them come home in part because her husband beat cancer two years ago and she wanted to show support.

“We can totally relate, she said.

Vanessa Quigley, a family friend, came with her two young boys and husband. Her youngest son beat cancer when he was three.

She helped the Bushmans research which hospital would be best.

When the Bushmans' minivan pulled around the bend, it was escorted by PBSO deputies on motorcycles to loud cheers, completing their round trip journey to St. Jude’s.

“Grandma!” Slater said as he jumps out of the back left sliding door.

The wait has been the hardest part.

“I said I wasn’t going to come home without him, and I didn’t,” Shari said to the crowd. “Both of them did it, Sawyer was such a good brother. He was with him every step of the way, for 435 days.”

They’re back with back with health and perspective.

“Don’t sweat the small stuff because it’s really not important, like this. What you hold in your arms, that’s really what matters,” Shari later said in an interview, holding Slater in her arms.

“It’s heartbreaking the stuff we’ve seen and what we’ve been through,” Shane Bushman said. “Obviously, we came home but not everybody does, not everybody we know has. We’re back but we’re different.”

The family will be back at St. Jude’s in September for a checkup.

WPTV first met the Bushman’s shortly after the start of 2018 when a car had barreled through their backyard and into their pool shortly after New Year’s.

Then, starting in April 2018, WPTV did a series of stories on Slater’s cancer battle that you can read below: