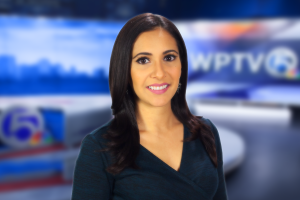 Michelle Quesada is the Senior Reporter at WPTV NewsChannel 5.

Michelle is thrilled to be back home in sunny South Florida where she was born and raised. She is a bilingual Cuban-American, a University of Miami Hurricane, and an award-winning journalist.

She came to WPTV from WTLV/WJXX First Coast News in Jacksonville in 2014 as a multimedia journalist. Before that, she got her start at WGXA in Macon, Georgia. She was promoted as WPTV's Senior Reporter in December, 2016.

Michelle received an AP Award for her reporting on the death of Jordan Davis, a teenager shot over loud music at a Jacksonville gas station in 2012. She's reported on numerous high-profile cases like the George Zimmerman trial in Sanford.

While working in Macon she was recognized by the Society of Professional Journalists with a Sigma Delta Chi award in breaking news for her reporting on a gruesome homicide case where a law school graduate was murdered and dismembered in 2011. Her interview with the suspect before his arrest led her to be invited on FOX's 'Justice with Judge Jeanine.' The suspect later plead guilty to the murder.

Michelle is a member of the National Association of Hispanic Journalists, the Society of Professional Journalists, and Investigative Reporters and Editors organization. On her free time, she loves to go the beach, take trips down to Miami, and spend time with her family and friends. Feel free to say hi if you see her around and make sure to email any story ideas to michelle.quesada@wptv.com. Follow her on Twitter @M_Quesada and connect with her on Facebook.