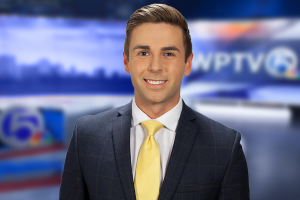 Derek Lowe joined the WPTV/WFLX team as a mulitmedia journalist in May 2020.

Derek is excited to be back home covering the Treasure Coast, where he was born and raised. He returns to sunny South Florida after a quick stop in Wichita Falls, Texas, where he was a morning anchor for two years at KFDX.

Before making his way to Texas, Derek worked at the CBS News bureau in Washington and at WKMG in Orlando, where he spent a lot of time covering the Pulse nightclub shooting and the manhunt for accused cop killer Markeith Lloyd.

Derek is a University of Central Florida graduate (Go Knights!) and holds a bachelor's degree in political science. While at UCF, stories took Derek to both the Florida state capitol in Tallahassee and inside the White House press briefing room.

Outside of work, Derek loves to exercise and take day trips to different cities up and down the coasts.