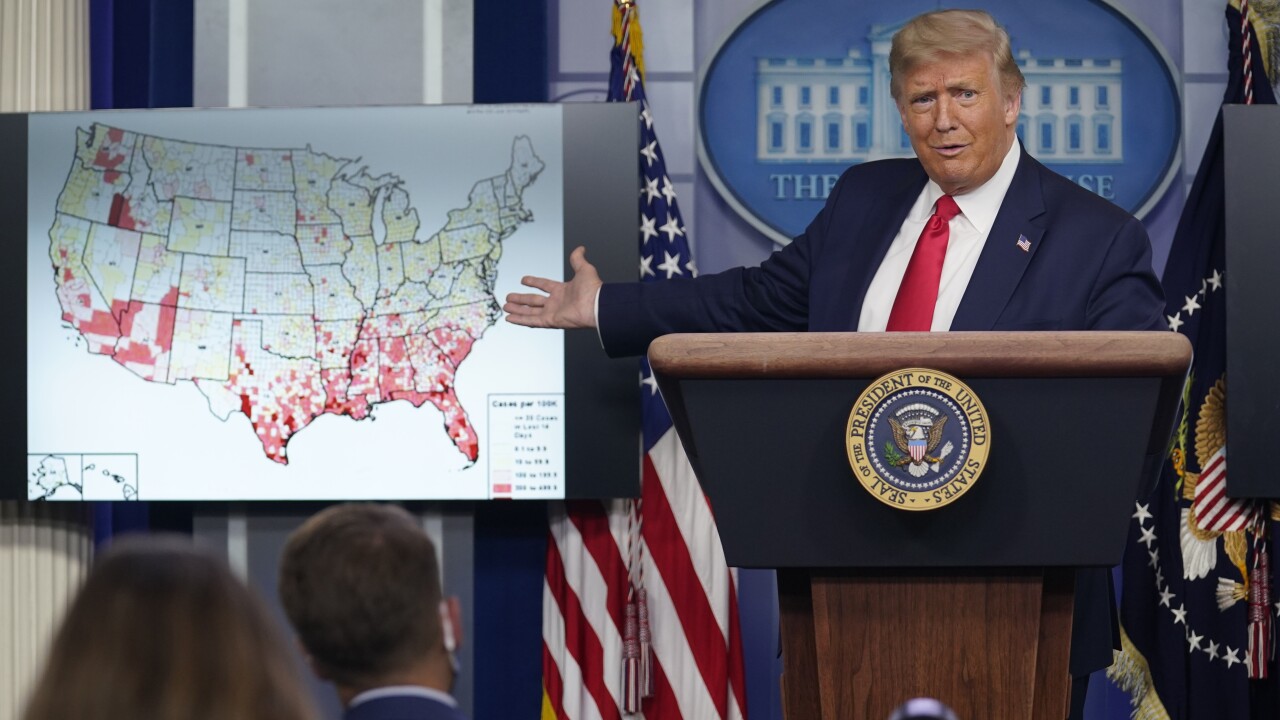 Evan Vucci/AP
President Donald Trump gestures towards a screen displaying a graphic on the coronavirus outbreak as he speaks during a news conference at the White House, Thursday, July 23, 2020, in Washington. (AP Photo/Evan Vucci)

1. "It’s not the right time:’ Trump cancels RNC in Florida
After relocating most of the Republican National Convention to Jacksonville, Florida, President Donald Trump announced he has canceled the Jacksonville portion of the GOP convention for next month due to the spread of the coronavirus in Florida.

A few convention activities will remain in North Carolina, Trump confirmed including an acceptance speech.

2. Is it "the right time" to go back to school? Florida lawmakers explain plans for their own children
Florida politicians are going on the record about their own school plans amid the ongoing pandemic.

Sen. Rubio will be sending his children, Gov. DeSantis' children are too young, but others having trouble with the decision.

You can see the full rundown here.

"Obviously, we would love to have zero deaths," DeSantis said. "If we could do that, we would want as few as we can."

On Thursday, Florida tallied 173 newly reported COVID-19 deaths, a record one-day increase for the state, bringing the total number of deaths to 5,518.

DeSantis said the public shouldn't be mislead by that number, claiming those deaths could date back several weeks, even months.

The pregame ceremonies started with leading infectious disease expert Dr. Anthony Fauci throwing the ceremonial first pitch in an empty Nationals Stadium. Fauci’s throw, which to his credit came from the stadium’s mound, bounced well wide of the plate.

And then members of both the Yankees and Nationals took a knee in honor of the Black Lives Matter movement. The teams knelt while an audio clip was played by actor Morgan Freeman about social justice, a nod to the recent unrest in the wake of the death of George Floyd while in police custody.

Some strengthening is forecast during the next day or two, and there is still a chance that Gonzalo could become a hurricane, the NHC said.

Tropical Depression 8 has been upgraded to Tropical Storm Hanna, the earliest 8th named storm on record. TS Hanna is expected to strengthen more before moving ashore in southern Texas. Flooding is a big concern since it will be moving slowly.

Today's Forecast
Today: Drier than the last few days, more sunshine!
Weekend: If you're looking for sunshine, Saturday looks to be the drier of the two days

On This Day In History
On July 24, 1911, American archeologist Hiram Bingham gets his first look at the ruins of Machu Picchu, an ancient Inca settlement in Peru that is now one of the world’s top tourist destinations.

Tucked away in the rocky countryside northwest of Cuzco, Machu Picchu is believed to have been a summer retreat for Inca leaders, whose civilization was virtually wiped out by Spanish invaders in the 16th century. For hundreds of years afterwards, its existence was a secret known only to the peasants living in the region. That all changed in the summer of 1911.