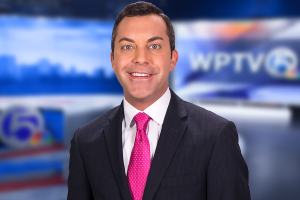 Ryan came to WPTV from Washington, D.C. where he worked as a reporter at WJLA ABC7 News.Ryan covered the inauguration of President Donald Trump, the Women’s March on Washington, the ambush on Republican lawmakers in Alexandria and the Washington Capitals’ first Stanley Cup win in franchise history. Ryan was nominated for two Emmy awards during his time in D.C.

Before reporting in the nation’s capital, Ryan spent nearly five years at WFMZ 69 News in Allentown, PA as a reporter and fill-in anchor. Ryan worked out of the Reading bureau reporting on crime, the federal corruption case surrounding Reading’s City Hall and a major hail storm that damaged hundreds of homes and vehicles. During his time in PA, Ryan won two Associated Press Awards and was nominated for an Emmy award.

After graduating from Miami, Ryan started his career in Salisbury, Md., where he was a reporter and fill-in anchor at WMDT 47 News. While reporting on the Delmarva Peninsula, Ryan covered Hurricane Irene hitting Ocean City, MD. He was also in the courtroom when a Delaware pediatrician was sentenced for abusing scores of his young patients. Ryan’s work was awarded with an Associated Press Award for a human interest story called, ‘Project Playground.”

Ryan got the news bug at a young age. He grew up in South Jersey, about 30 minutes outside Philadelphia. While he’s not chasing after breaking news, Ryan enjoys getting outside playing tennis, traveling and relaxing at the beach. If you have a story you would like Ryan to cover, you can email him at Ryan.Hughes@wptv.com. Make sure to follow him on Facebook and Twitter.