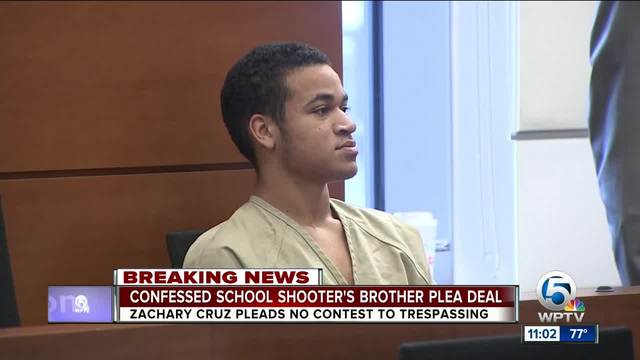 The brother of the suspected Florida high school gunman is in court for reconsideration of his $500,000 bail on a trespassing charge.

FORT LAUDERDALE, Fla. (AP) — The brother of the suspected Florida high school gunman pleaded no contest Thursday to trespassing on the campus where the deadly rampage happened and was sentenced to time served and six months of probation.

Circuit Judge Melinda Kirsch Brown also ordered Zachary Cruz, 18, to enroll in therapy, wear an ankle bracelet and said he cannot possess firearms or ammunition. The judge also said Zachary Cruz must be tested to make sure he isn't consuming drugs or alcohol and must stay at least 1 mile from Marjory Stoneman Douglas High School during probation. He can never visit the school again and must not contact any victims or their families.

He was arrested March 19 after police found him skateboarding at Stoneman Douglas after school, 33 days after his 19-year-old brother, Nikolas Cruz, killed 17 students and staff members and wounded 17 others during a Valentine's Day shooting. Broward sheriff's deputies say Zachary Cruz had told him not to come on campus, but his attorney, Joseph Kimok, denied that.

Zachary Cruz had spent the last 10 days in custody on $500,000 bond ordered by a different judge. The typical bond in Broward County for trespassing, a second-degree misdemeanor, is $25.

But this was not a typical trespassing case. Cruz, shackled at the wrists and ankles and wearing a tan prison jumpsuit, was led into court by six deputies Thursday as numerous reporters and TV cameras looked on.

Prosecutor Sarahnell Murphy announced a plea deal had been reached, the conditions were read and the judge asked if he understood. He softly replied, "Yes, ma'am." After the judge accepted his plea and pronounced sentence, Kimok read an apology from Cruz, saying he was sorry if he scared anyone by visiting the school.

"Zachary has experienced, and continues to experience, a trauma unlike anything any of us could imagine," Kimok told the judge. He pointed out that the Cruzes' mother died in November, forcing him to live with a guardian miles away. "Then in February, the only family member he had left, his brother, murdered 17 people in cold blood." That put Zachary Cruz's history, which has included counseling and calls about him to police, on national display, Kimok said.

Zachary Cruz was fingerprinted and the six deputies led him out. He will likely be released within a day.

After the hearing, Kimok called Zachary Cruz's 10-day detention on $500,000 bond on a trespassing charge "immoral and unconstitutional." He said there is no doubt that was done simply because of who his brother is. He said no one else would have been arrested.

"If they can do to Zachary what they did to him in the light of day in front of the national media, they can do it to anyone and that should scare all of us," Kimok said.

The Cruz brothers shared the same biological mother but had different fathers. Both were adopted at very young ages by Roger and Lynda Cruz. Lynda Cruz died in November and their father died some years earlier.

The attorneys for Nikolas Cruz have admitted he committed the shooting and have said he would plead guilty in exchange for a life sentence. Prosecutors have said they will seek the death penalty.