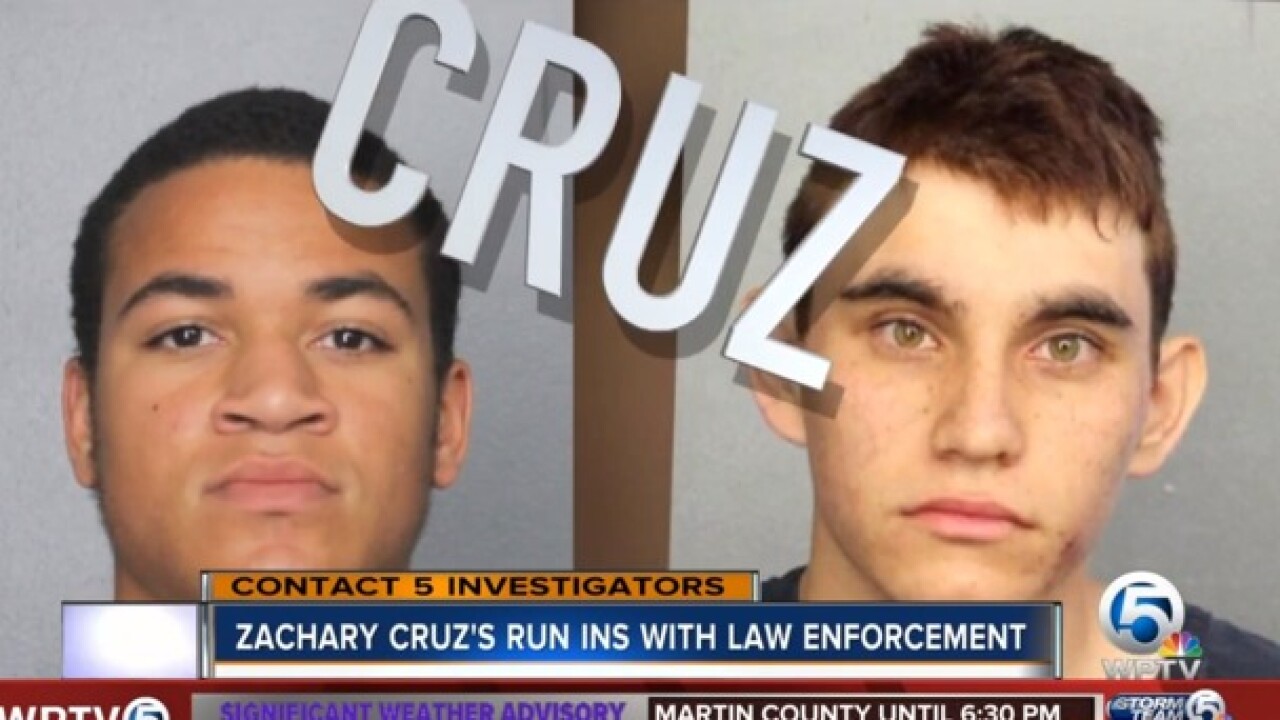 Zachary Cruz, 18, who currently lives in Palm Beach County, was arrested by deputies on Monday for trespassing on Marjory Stoneman Douglas High School’s campus. Cruz is the younger brother of the accused Stoneman Douglas gunman, Nikolas Cruz, who was charged with 17 counts of murder after allegedly shooting and killing staff and students on Valentine’s Day.

Zachary Cruz had 41 run-ins with law enforcement, almost two times more than his older brother Nikolas, who had 23 run-ins.

Zachary Cruz was investigated for things like running away from home, hitting his mom with a baseball bat, and refusing to go back to school after he was suspended.

A report from the Florida Department of Law Enforcement shows Zachary Cruz plead guilty in 2016 for juvenile charges of grand theft, criminal mischief and petty theft.

Records and 911 calls obtained by Contact 5 show both struggled to deal with the loss of their mother, but each dealt with it in different ways. While Nikolas Cruz acted out by purchasing guns and fighting with his guardian, Zachary Cruz did not go to school.

Contact 5 found a 911 call placed by a social worker at Marjory Stoneman Douglas High School, requesting a welfare check on Zachary Cruz. “He has not been withdrawn from here … so we are concerned about his welfare, and that things are not happening, and they need to for this young man. He needs to be in school,” she told dispatchers.

The call was placed about one month after their mother died. Deputies responded to the house, but neither Zachary Cruz or Rocxanne Deschamps were home.

Shortly after Nikolas Cruz was arrested for the school shooting, Zachary Cruz was Baker Acted. Records show he told Palm Beach County deputies that he felt somewhat responsible for the school shooting, and could have possibly prevented it. “Zachary explained that he and his friends, when they were younger, had bullied Nikolas, which he now regrets ever doing. Zachary wishes that he had been ‘nicer’ to his brother,” the report reads.

Zachary Cruz goes on to tell deputies that Nikolas may have been their mother’s favorite son, but did not want to shoot up a school.

Campus crimes
Court records show this was not the first time Zachary Cruz trespassed on Marjory Stoneman Douglas High School property, but it was the first time he was arrested for the crime.

“He admitted this was not the first time he had been present on the school campus, but rather the third,” a state prosecutor told a judge during Zachary Cruz’s bond hearing on Tuesday.

According to his arrest report, Zachary Cruz ‘surpassed all locked doors and gates and proceeded to ride his skateboard through school grounds.’ Cruz told officials he unlawfully entered school property to ‘reflect on the school shooting and to soak it in.'

Zachary Cruz was charged with trespassing, and taken to the same jail where his brother, Nikolas, is currently locked up.

According to state prosecutors the brother’s were able to see each other. “[Zachary] has been heard and observed discussing how popular his brother is now; that his face is everywhere and his name is national. There is discussion of starting some pen-pal or fan club, and how many girls [Nikolas] is capable of attracting,” said a prosecutor. “As far as family ties, he has all the same red flags present as his brother.”

A judge set Zachary Cruz’s bond at $500,000 despite the misdemeanor crime.

“The state’s request is entirely disproportionate to the crime which [Zachary] Cruz has been accused at this point of committing,” said his defense attorney. “The standard bond for this crime is $25. Mr. Cruz, according to the sheriff’s website, posted that bond. He should have already been released. He is being held because of who he is related to, not because of anything that he did.

Zachary Cruz must wear and ankle monitor and undergo a psychological evaluation. A judge also ordered police to search his home in Lantana for any weapons. Cruz is forbidden from visiting Broward County or contacting his brother, Nikolas. He must also stay at least one mile away from the Marjory Stoneman Douglas High School campus.