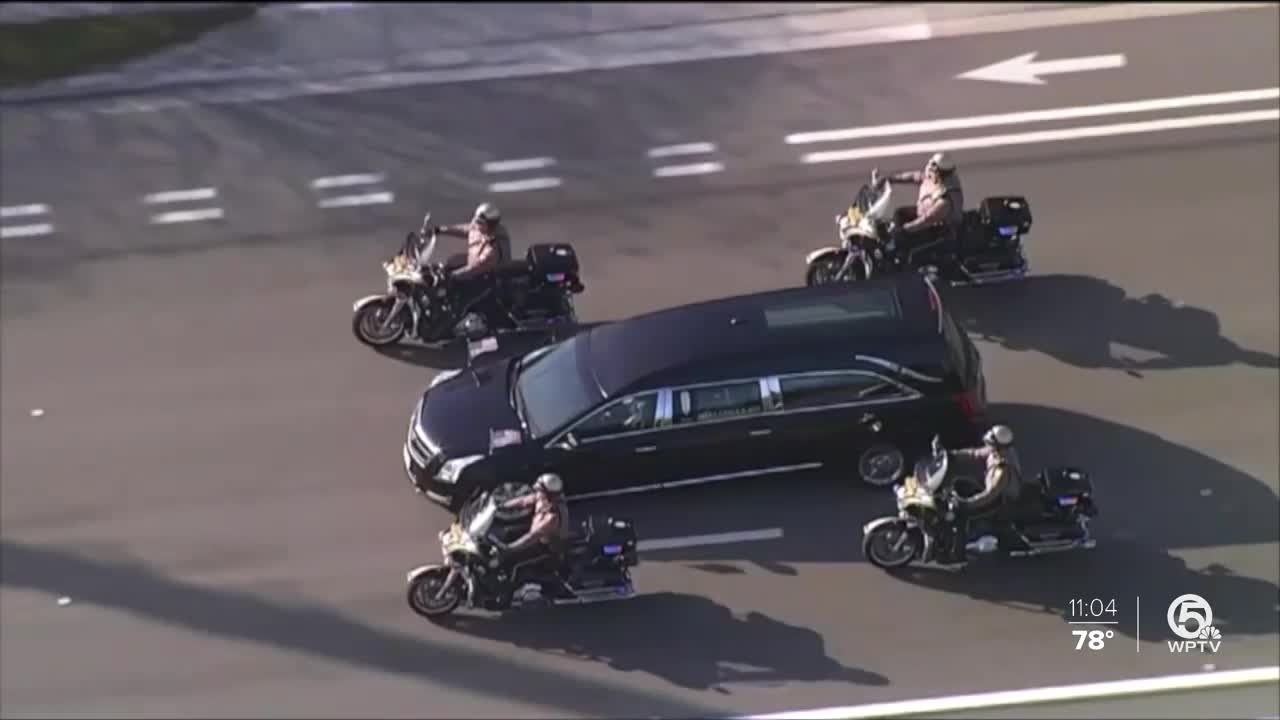 Family, friends, and the community remembered the life of a brave and dedicated Florida Highway Patrol trooper on Thursday after he was shot and killed in the line of duty last week. An emotional public memorial service for Trooper Joseph Bullock took place around 11 a.m. at Bayside Community Church in Bradenton. 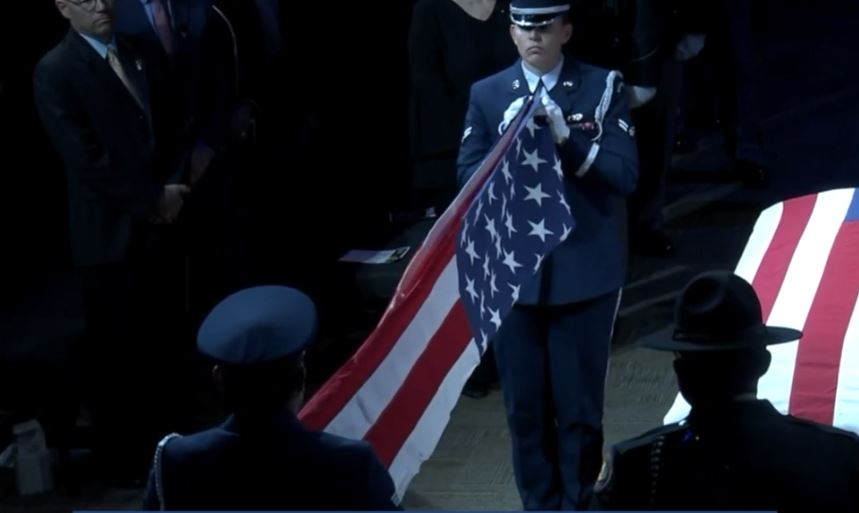 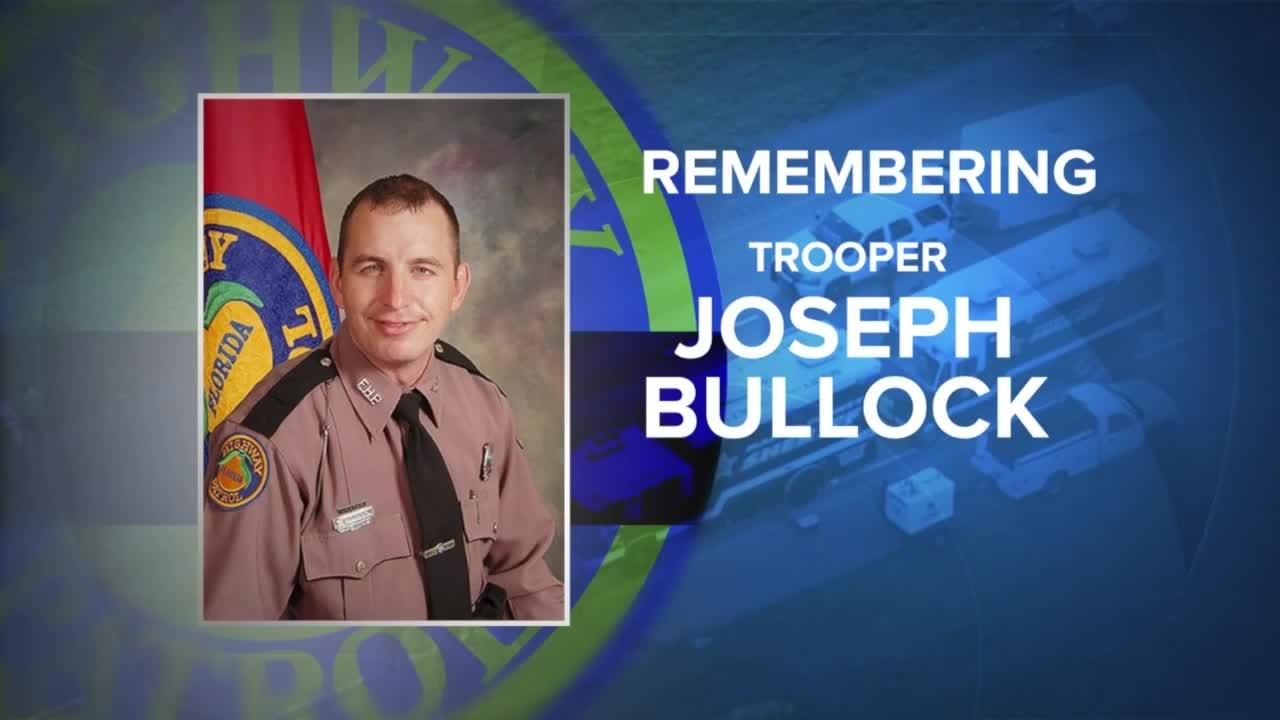 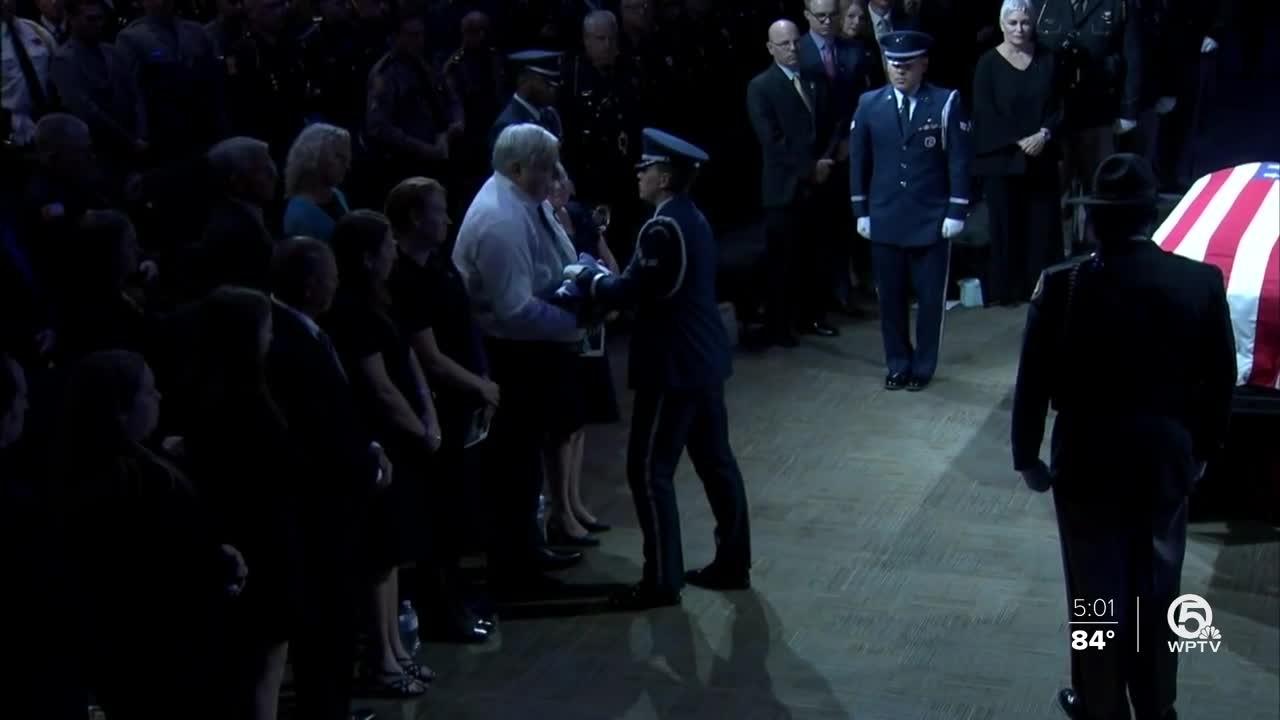 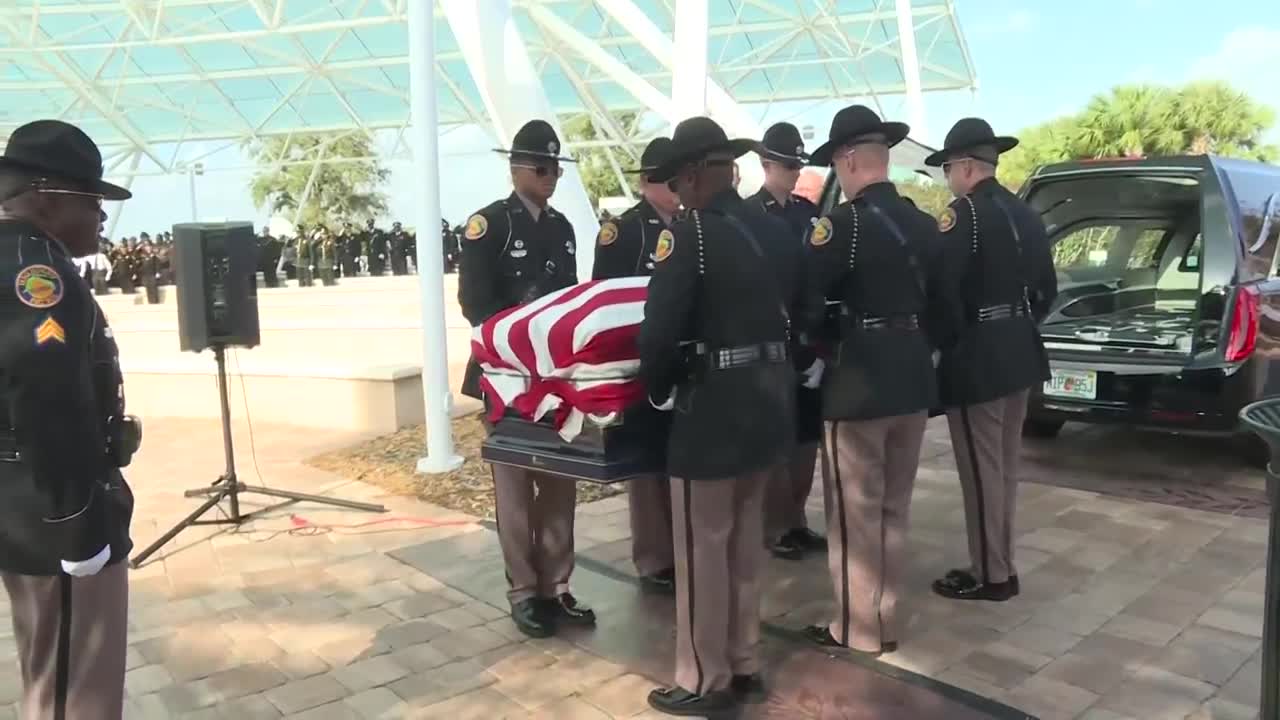 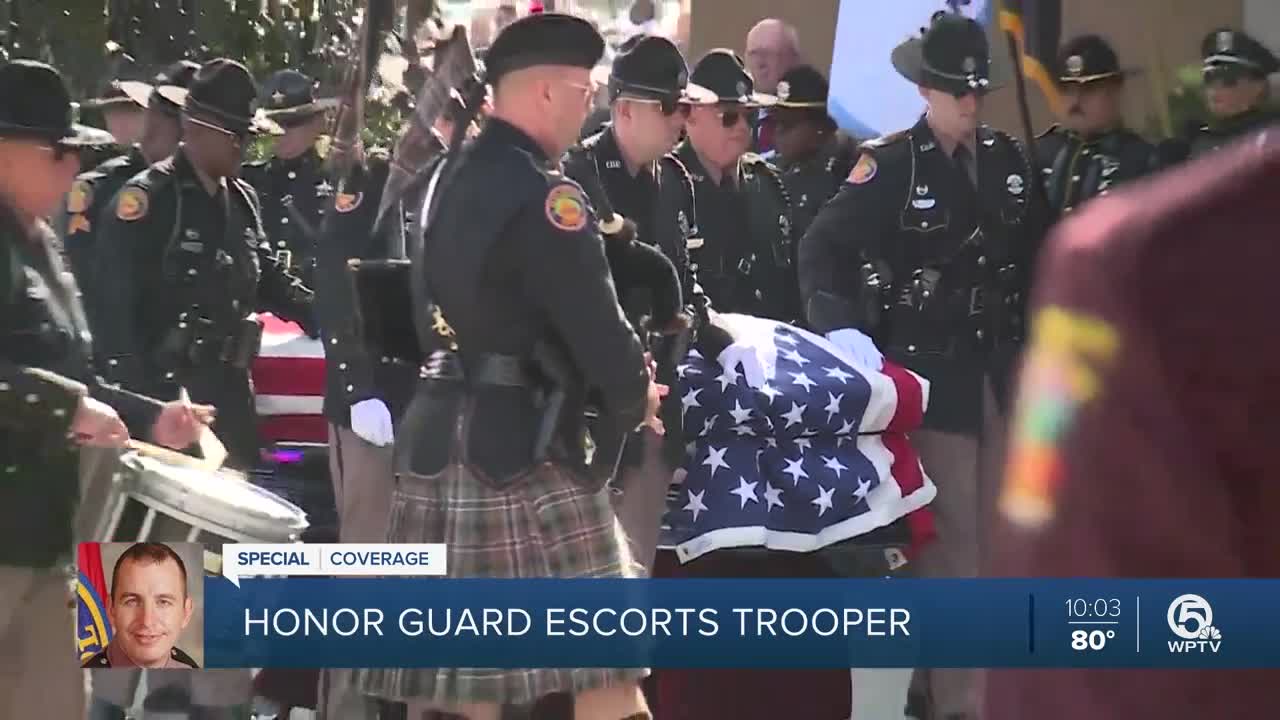 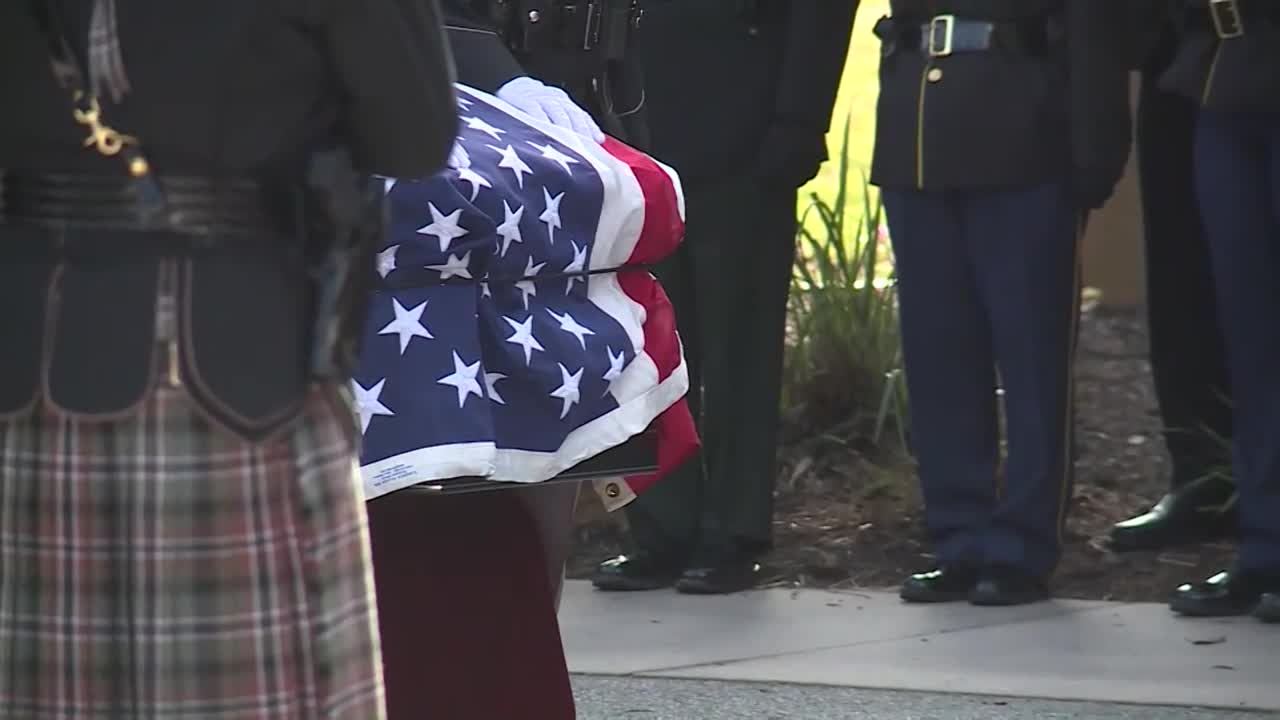 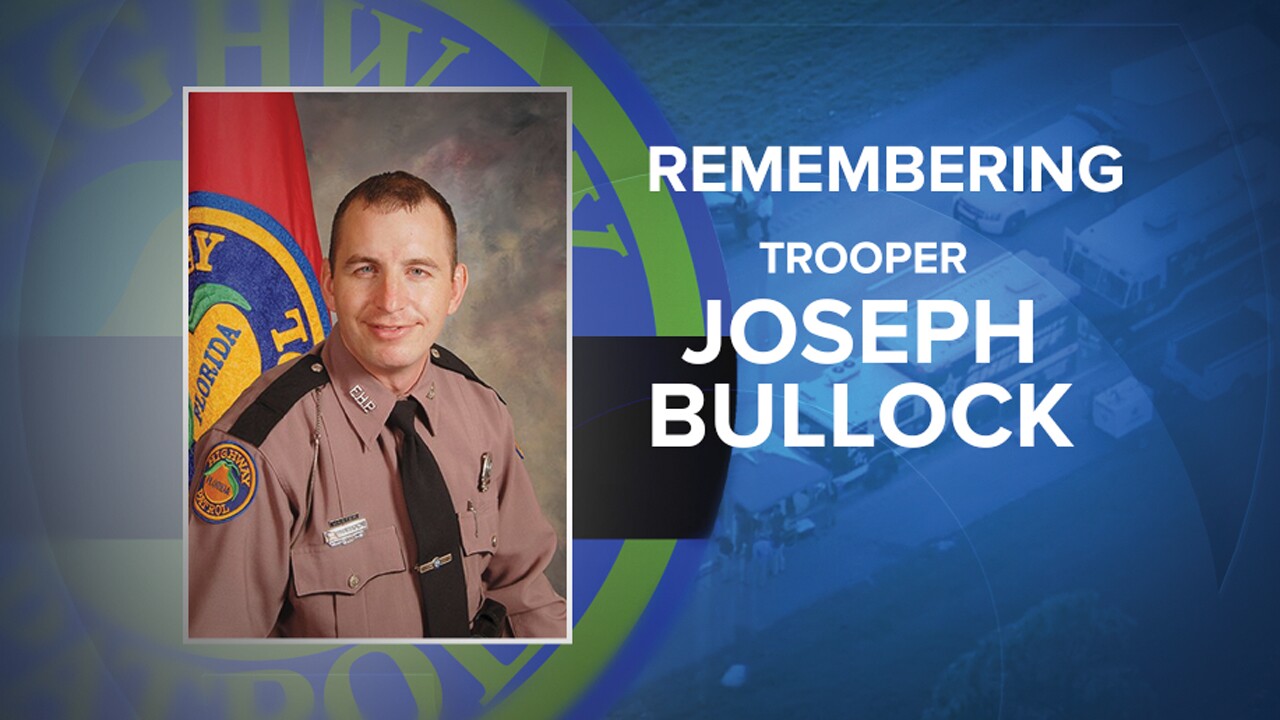 SARASOTA, Fla. — Family, friends, and the community remembered the life of a brave and dedicated Florida Highway Patrol trooper on Thursday after he was shot and killed in the line of duty last week.

"Being a peacemaker was his calling. It's all he wanted to do," said U.S. Rep. Brian Mast. "And there is no more noble mission than safeguarding your community and defending those who call out for help."

"Your destiny is to be peacemakers," said Martin County Sheriff William Snyder. "In a turbulent and broken world, your presence brings peace and healing and calming."

Bullock's parents, along with his two sisters, were in attendance.

Following Thursday's memorial service, a law enforcement procession led Trooper Bullock's body to the Sarasota National Cemetery, where he received law enforcement honors along with a 21- gun salute, aircraft flyover, and the playing of bagpipes.

Earlier in the morning, the trooper's body arrived at Bayside Community Church, led by a procession of dozens of law enforcement officers.

Bagpipes played as Bullock's casket, draped in an American flag, was carried into the church.

According to the Florida Highway Patrol, Bullock was assisting a disabled vehicle on Interstate 95 at mile marker 107 in Martin County on Feb. 5.

A man who was with the vehicle, 28-year-old Franklin Reed III, suddenly shot and killed the 42-year-old trooper.

Witnesses said Reed was angry over having to pay to tow his car, and that's why he opened fire.

According to FHP, an off-duty Riviera Beach police officer, identified as Jemel Headings, was passing by the scene while heading to work and engaged the suspect, fatally shooting him.

"Somebody waved him down, and he stopped," said FHP Maj. Robert Chandler while introducing Officer Headings. "He got into a situation. He had no idea what he was getting into. It unfolded very, very quickly."

Officer Headings was honored for his bravery at Thursday's memorial service, receiving a thunderous applause from the crowd.

"He is a hero," said Maj. Chandler. "That suspect that murdered Trooper Bullock couldn't hurt anybody else because of this detective."

Maj. Chandler announced on Thursday that plans are now in the works to name a stretch of I-95 in Martin County between mile marker 105 and 110 as Trooper Joseph Bullock Memorial Highway.

"It is with great sadness and sense of loss that we continue to work through the grieving process and the loss of our son and brother Trooper Joe Bullock.

We are deeply touched by the outpouring of sympathy from friends, family and even people who never knew him from around the country.

A special thanks to the FHP family that continues to guide us with care during this time."

Trooper Bullock spent his entire 19-year career with FHP's Troop L in Fort Pierce, and was also a veteran of the U.S. Air Force.