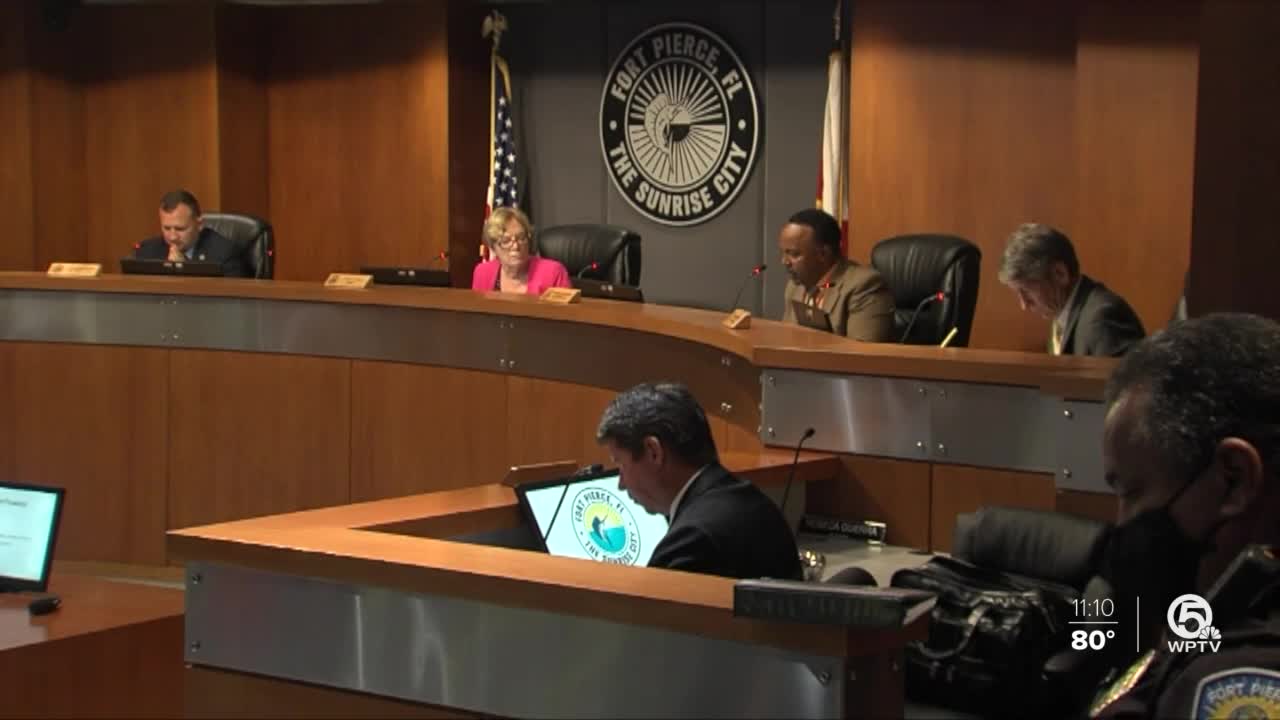 A Fort Pierce city commissioner wants more to be done to make sure police body cameras are always rolling when they are supposed to be.

FORT PIERCE, Fla. — A Fort Pierce city commissioner wants more to be done to make sure police body cameras are always rolling when they are supposed to be.

This comes after two Fort Pierce officers were arrested for their involvement in the beating of a patient at Lawnwood Regional Medical Center, but their body cameras were not recording.

Fort Pierce Police Chief Diane Hobley-Burney has said that there is an internal investigation surrounding the body camera use inside the hospital. There are also questions over whether the officers, who were working an off-duty security detail at the hospital, would be required to record a potential crime inside a medically sensitive area.

Commissioner Reggie Sessions fears had there not been surveillance video inside the hospital, the officers might not have been arrested.

He made a near 2-hour presentation Monday night to commissioners detailing a host of concerns, including his idea to create a city ordinance that would require police officers to record entire citizen interactions and upload the entire videos to a server. He wants there to be a fine or misdemeanor charge for failure to do so.

Commissioner Johnson said he’s not sure city rules about police policies are appropriate.

“There are policies in place and it’s our job to hold the folks who are in charge of those policies, hold their feet to the fire,” Johnson said.

“What we have to do is start some conversation,” Sessions said. “To sit here silently and act as if nothing is going on is the biggest mistake that we could possibly make.”

A Fort Pierce-based attorney agrees something more needs to be done beyond police policies.

RELATED: Second Fort Pierce police officer arrested in Lawnwood Regional Medical Center incident
“I would like every officer who is on the scene or interacts with a citizen to record their interaction from the beginning of the interaction until the interaction has concluded, which is exactly what they’re supposed to do pursuant to their own policies,” Minton said.

Too often, Minton said, the footage is not available that could help her defend her clients, or more quickly move a case through the judicial system.

“It’s a significant number of cases. It's a significant majority of my cases. Saying 90% is kind. I think it’s probably almost 100% [of cases] that do not have a continuous recording from beginning to end,” Minton said. “The fact they’re not following their own policy is the frustrating part.

Al Boettjer, Staff Representative for the Coastal Florida PBA, said there have been issues with the body cameras glitching, saying any missing footage may not be the fault of the officers, but rather, it may be worth working closely with the manufacturer to resolve potential technical problems.