Signs encourage drivers to slow down in West Palm Beach

Signs warning drivers to slow down were installed in downtown West Palm Beach over the weekend. 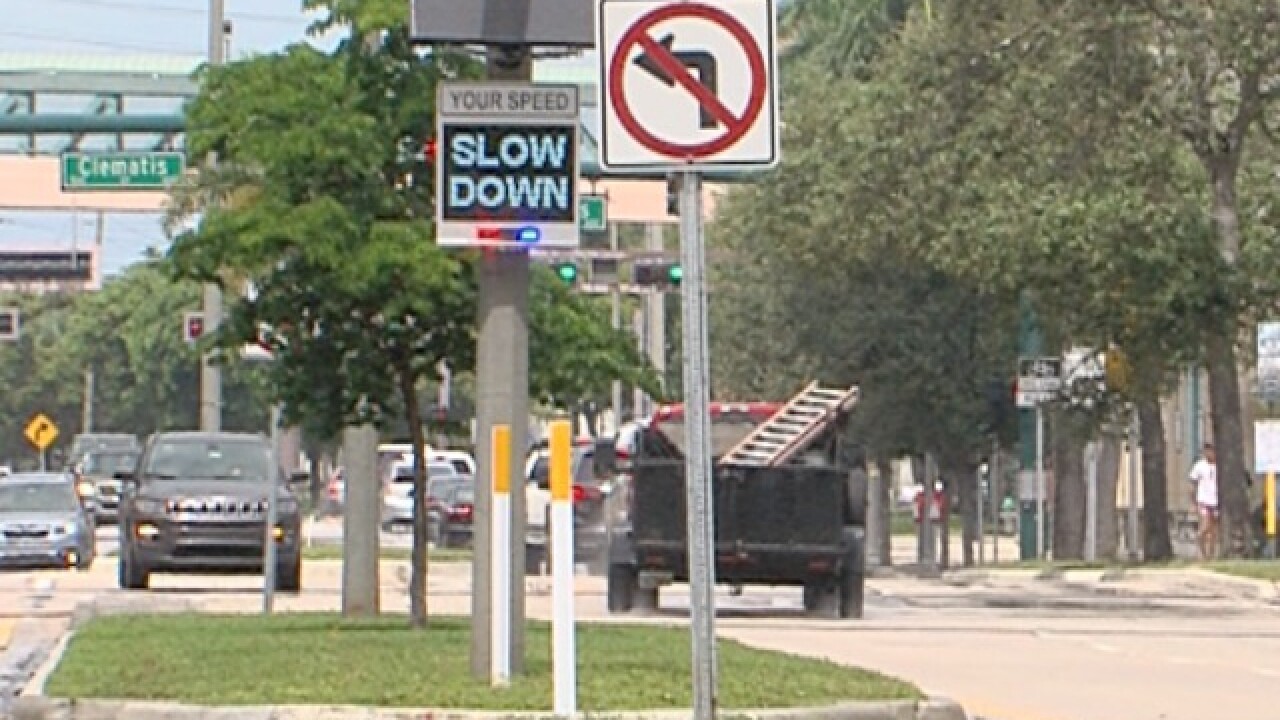 While driving in downtown West Palm Beach, you probably noticed a sign warning driver slow down.

A sign on Quadrille Boulevard was installed over the weekend and it's part of a greater plan to make the roads safer for pedestrians.

Last year, we followed along with his interesting commute by bike outside of his office on Quadrille Boulevard. He helps other bicyclists who have been hit by cars, through Bill Bone Bike Law as an investigator.

“Unfortunately it has not gotten any better. There’s no rhyme or reason to the type of car type of driver people will come very close to you," he said. “Despite Florida having a 3-foot law, cars easily come a couple of inches from you."

And that's why the city of West Palm Beach and the West Palm Beach police department are putting up speed tracking signs in problem areas like Quadrille Boulevard, where several complaints have been made about speeding.

A man from Tennessee was killed on Dec. 3 and his wife was injured crossing the road near Hibscus Street and Quadrille Boulevard.

The city said following the incident, officials reached out to the Florida Department of Transportation -- which manages that stretch of Quadrille -- to look into traffic improvements. In the meantime, the city made the decision to put up the flashing speed limit signs in an effort to encourage drivers to slow down.

The city also plans to put one of the signs on Australian Avenue and 36th Street, which is another high-speed problem area after a car crashed into someone’s house there.

Following the sign installation over the weekend, Hassell said he checked to see if it made a difference. Many cars slowed down upon seeing their speed.

"But most of them just seem to go right on through despite the flashing red light in the flashing speed limit," he said.

With time, police are confident the signs will help. The signs have been proven in other Florida cities like St. Petersburg to be very effective.

“It' s very frustrating to deal with speeders," said Capt. Joseph Ahern of WPBPD. "We only have so many officers out there that watch those sites. So those pole mounted signs will be there until we choose to move them.”

“Travel lanes do not need to be 12-foot lanes anymore," she said. "Some of our streets are actually 15-foot lanes with no on-street parking, so it’s wider than I-95.”

In the coming years, she said the city will begin rolling out some changes to downtown roads, as seen in the recommendations made by the Mobility Study conducted this year . Changes could include features like more parking and narrower streets.

“I would say incremental changes is the most effective because we don’t want to shock the community with the big change," she said.

For now, the city will do a speed study in the next few weeks to see how well the signs are working.

“It’s a good reminder to the drivers in motorist that there is a speed limit and that they should be mindful of their speed," said Hassell.