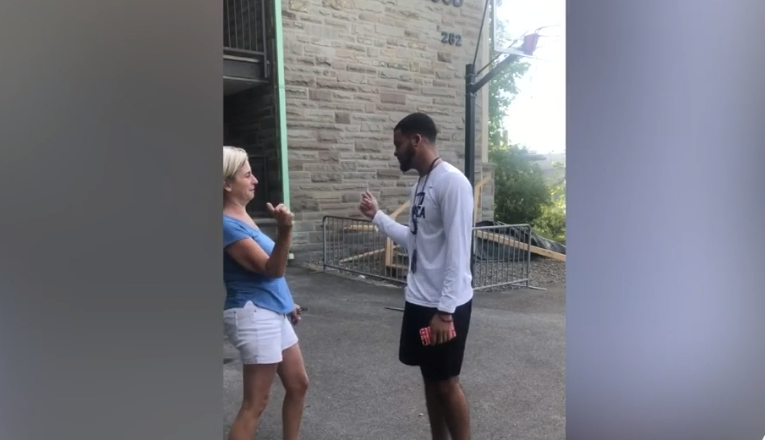 PALM BEACH COUNTY, Fla. — For Beth Wagmeister, sending her son off to college was one of the most difficult moments as a mother.

“I think the hard part was that he realized that this was going to be the last time for a while that we were going to do that,” Wagmeister said about a special handshake she had with her son Daniel Hutchinson before every football game for more than five years.

The West Palm Beach mom would cheer him on at his high school football games at Oxbridge Academy in West Palm Beach. After his junior year, the program was dismantled and he transferred to Forest Hill High School.

Recently, they recorded a now viral video with more than 500,000 views.

“You know he could look at me from the stands and I could look at him out on the field and do the I love you sign, it was just our thing,” she said.

After surviving domestic abuse and an almost career ending ACL tear at Forest Hill, Hutchinson earned a scholarship to play football at Ithaca College. Wagmeister says the moment they recorded the video they realized they had overcome their struggles.

“Just knowing that you can have a happy ending, you can turn your life around,” she said.

“I knew I was going to get sad, but I wasn’t worried about trying to go viral or this or that, you know it’s just my mama so I love her that’s all it is,” Daniel Hutchinson said.

Now with a little bit of American Sign Language and a lot of love, this mother and son duo are showing the world that anything is possible.

“A handshake and a hug and just meaningful conversations and not being so afraid to dance around the truth,” said Wagmeister, who is a sign language interpreter and advocate for the deaf.