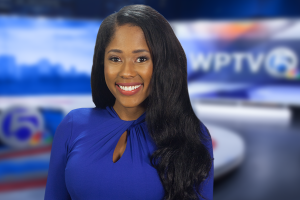 Sabirah Rayford is a multimedia reporter for WPTV NewsChannel 5.

Rayford made the trek to West Palm Beach after a stint in Lexington, Kentucky, where she started as a sophomore in the sports department before transitioning to news as a multimedia reporter and fill-in anchor for WKYT-TV, the CBS affiliate.

In 2015, she won Feature of the Year at the Kentucky Associated Press Broadcaster Awards for a story about a former state Supreme Court justice who transitioned from a man to a woman at the age of 65. She also received Best in Show for her work that year. Rayford led WKYT’s coverage on the shooting death of Trinity Gay, daughter of U.S. Olympic track star Tyson Gay. The 16-year-old girl was murdered outside of a restaurant while hanging out with friends. Her death sparked a number of conversations about the increase in senseless murders in central Kentucky.

Rayford is originally from Overland Park, Kansas. In her spare time she enjoys spending time with family and friends and reading and writing poetry.

She’s excited to be covering news in South Florida. If you have a news tip or would like to say hi she can be reached @SabirahRayford on Twitter or by email Sabirah.Rayford@wptv.com.