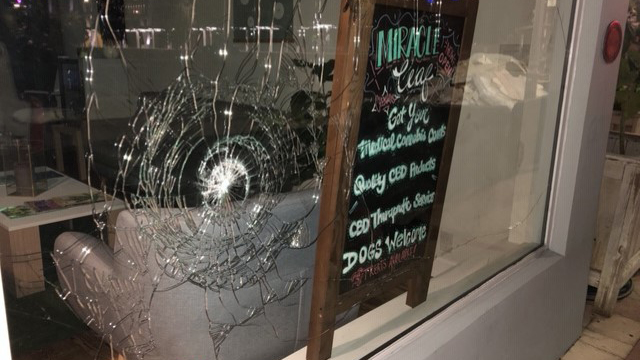 Several downtown business owners are waking up to shattered windows after a tense confrontation between protesters and police Sunday night.

Windows at Subculture Coffee, Rush Bowls, and Miracle Leaf in the 500 block of Clematis Street were shattered Monday morning.

WPTV NewsChannel 5 crews in downtown could see about 100 people gathered and blocking traffic around the intersection of Clematis Street and Quadrille Boulevard, many of them coming from an earlier peaceful protest on Interstate 95.

Police tried to get the crowd to disburse after announcing a 9 p.m. curfew.

When some people did not immediately leave, witnesses said, police fired tear gas and rubber bullets.

Downtown business owner Rodney Mayo said it didn't have to go that way. He believes that's when the damage happened to his business.

"Right after that were when the shields (went up) and they escalated it right after that," he said. "It was completely unnecessary."

"If you are looking to find blame in the West Palm Beach Police Department please put it all on me. What started out as a peaceful protest by an estimated 3000 or so people turned into riotous conditions by a few dozen agitators, many from far away communities.

These agitators were well organized and had a plan to turn this peaceful event into anarchy; they advertised their intent on social media.

The West Palm Beach Police Department provided staffing so the event could run smooth and the protesters could share their voice on social injustice. This was at a huge cost to my police budget, which was already exhausted from the COVID 19 virus. (100 additional staff)

The protest was peaceful, the police blocked traffic and even closed I-95 for safety, this caused huge traffic delays throughout the city and in general the I-95 closure caused huge traffic problems throughout all of south Florida. The police had received information that the agitator’s intent was to stop traffic on I-95. Just imagine the fear a citizen would experience with over 3000 people unexpectedly approaching your vehicle and family with masks chanting and screaming while blocking traffic. Again I witnessed a handful of agitators grabbing door handles, kicking cars and even jumped on the hood of a vehicle in an attempt to draw a reaction from police.

My phone rang off the hook with citizen’s complaints on why we the police were allowing road blockage and witnessing clear criminal acts. (Flag Burning, Graffiti and Criminal Mischief).

As it became dark, the peaceful protesters left, I had personal interaction and thanked them for their cooperation.

Police nationwide are disgusted by the incident that occurred in Minnesota, but my officer’s had to stand down, had objects thrown at them, witnessed signs advertising hate and threatened. We know from our training the agitators are trying to provoke a police reaction. The tolerance my officer’s displayed was a much clearer message of support to the protesters than taking a knee.

At darkness the agitators began causing damage, knocking down signs, hitting parking meters with lug wrenches and other acts of criminal mischief, when the agitators began jumping on cars stopped in traffic, police interacted and were forced to use a non-lethal crowd control mechanism, pepper spray. This is what the agitators needed and planned for, conflict.

Rocks began being thrown at police, my cars windows were shattered, I was struck in the ankle by a cracked brick, and I was truly in fear for my officer’s safety. I was disgusted that a couple dozen agitators ruined a peaceful event and forced my officer’s to take action to justify their criminal anarchy.

As planned these agitators now criminals took advantage and began looting businesses all over our city. An emergency curfew was enacted to take the criminals off the street not the peaceful protesters. After warnings to disperse, and the attacks by rocks, bottles and even shots being fired my officers were forced to shoot non-lethal rubber bullets at the rock throwers.

The city survived last night without any reports of serious injury and limited damage and theft, so I praise the officer’s of the West Palm Beach Police Department for their outstanding service and dedication to duty.

To the peaceful protesters I offer my apologies, as it was truly an honor to serve and protect you."