'I believe that he was sincere for the moment,' Tony Nelson says of neighbor 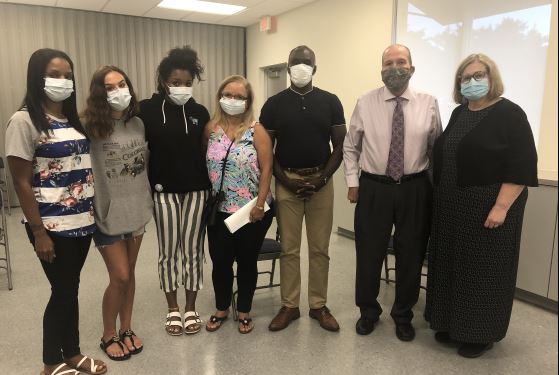 An outburst with racial overtones in a Wellington neighborhood last week left a teenage girl hurt and saddened. It's an outburst that's now been seen and heard across the country.

WELLINGTON, Fla. — An outburst with racial overtones in a Wellington neighborhood last week left a teenage girl hurt and saddened. It's an outburst that's now been seen and heard across the country.

Wellington resident Lee Jeffers verbally attacked two teenage girls June 17 over an incident with a golf cart. Caught on camera, Jeffers would eventually direct his anger towards the only Black teen out of a group of five.

He would ultimately get into a confrontation with the girl's grandfather, Tony Nelson.

'You do not deserve to be in here,' Wellington man tells teen girls

More than a week has passed since the encounter, and in a picture taken Wednesday afternoon, it shows Jeffers meeting with Nelson and the two girls in the video. He apologized to them.

"He apologized to the three of us and my daughter," Nelson said. "I believe that he was sincere for the moment and, I have to say this, I believe that his wife was very sincere."

In a letter, Jeffers wrote to Nelson and the girls, "I'm sorry. Please let me start there. I am deeply sorry for having scared you and your friends."

He went on to say that, "If this situation had a theme, it would be age vs. youth, not age vs. race.

Jeffers eventually said, "I would give anything to be able to take back my words and actions."

When it comes to forgiveness from Nelson, he said, it's not that easy.

"It's going to take time and we've got to get out there and prove ourselves in the community, working with underprivileged kids that he's not comfortable with," he said.

Over the past week, Nelson said he, his granddaughter and her friend have gone through a wide range of emotions.

"He asked them, 'What was the worst thing that I did?' And she said, 'You yelled at 15-year-old girls,'" Nelson said.

Jeffers works for the U.S. Department of Homeland Security. The agency got word of the situation and is currently investigating the altercation. He has been placed on leave pending the outcome of the investigation.