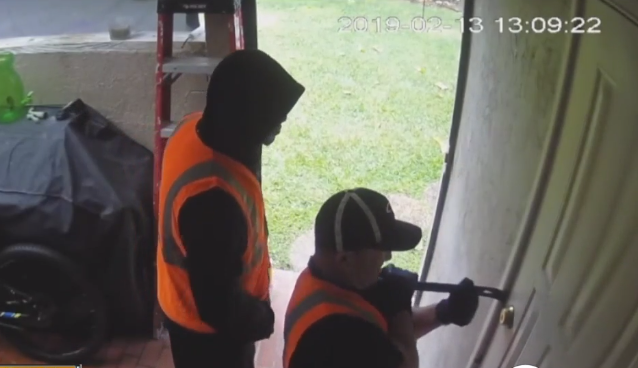 The Palm Beach County Sheriff’s Office is investigating after a Wellington man says two men burglarized his home, taking a laptop, a gun and his mother’s ashes Tuesday afternoon.

WELLINGTON, Fla. — Do you recognize these two guys?

The Palm Beach County Sheriff’s Office is investigating after a Wellington man says two men burglarized his home, taking a laptop, a gun and his mother’s ashes Tuesday afternoon.

Surveillance video from the back porch shows two men dressed in bright orange vests. One guy is in a Miami Heat hat the other has a hood on.

One knocks on the door and checks the handle, clutching a crowbar. He later acknowledges the camera, spraying WD-40 on it, only for it to clear up in time for the world to see them force their way in into 28-year-old Jake Wetjen’s home.

“I do IT work, I install cameras and TVs and stuff like that. That’s why we have the footage that we have,” Jake said

Inside, they rummaged through Jake’s room. He says they took his Macbook pro laptop, his Smith and Wesson handgun, and his mother’s ashes. Lynda passed away in 2016.

“My mother’s ashes, that was the only thing I had left of my mom. It takes a toll. It’s quite painful to not have a piece of her anymore,” he said. “I really hope that someone does call and report them if they know who they are … if anything, at least we can catch these guys and get them off the streets so they’re not breaking into houses and stealing their stuff or their personal belongings.”

If you recognize the two men, call the Palm Beach County Sheriff’s Office.