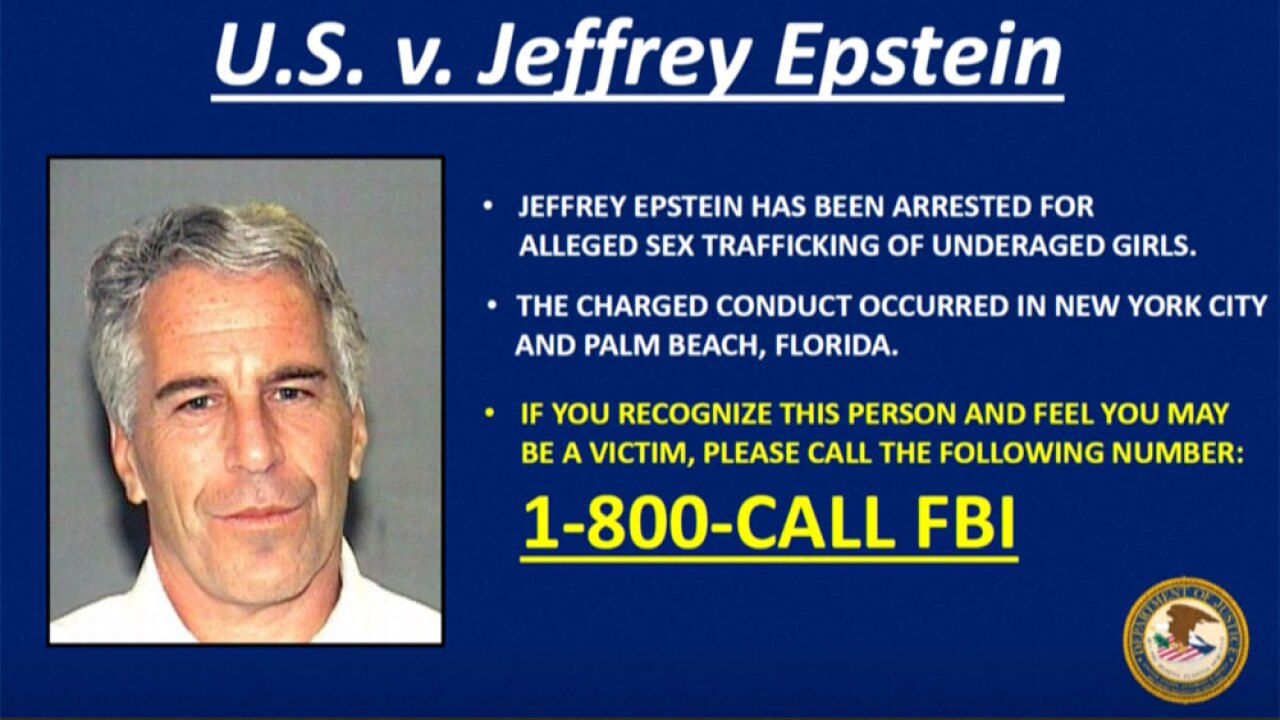 NEW YORK (AP) — Financier Jeffrey Epstein's lawyers, seeking bail for their client, said Thursday that he feared a "toxic political climate" might cause federal prosecutors to scrap a deal he made with them over a decade ago and charge him again with sexual abuse charges involving underage girls.

The lawyers recommended house arrest and electronic monitoring for Epstein as they countered what they described as a "drastic demand" by prosecutors that he be detained until trial on charges that he engaged in sex trafficking with dozens of underage girls in Florida and New York from 2002 to 2005.

Epstein, 66, was arrested Saturday as he arrived at a New Jersey airport on a flight from Paris. He pleaded not guilty Monday and a judge asked defense lawyers and prosecutors to submit their bail arguments prior to a hearing next Monday.

In seeking detention, prosecutors said a trove of what seems to be nude pictures of underage girls was found in his mansion after his arrest on charges that he sexually exploited and abused underage girls.

In their submission in Manhattan federal court, lawyers said Epstein always knew federal authorities might renege on a non-prosecution deal signed in 2007 and applied in 2008, around the time he pleaded guilty to state charges in Florida, served a jail sentence and registered as a sex offender.

"Indeed, Mr. Epstein feared the toxic political climate might tempt the government to try and end-run the NPA — yet continually returned home from travel abroad, fully prepared to vindicate his rights under the agreement and otherwise mount a full-throated defense," they wrote.

"Finally, the government takes its extreme position in the teeth of Mr. Epstein's perfect compliance with onerous sex offender registration requirements — pinpointing his exact nightly whereabouts — across multiple jurisdictions over a 10-year period," they said.

The defense lawyers also criticized the prosecution's case, saying it was wrong to label Epstein's behavior as sex trafficking.

"Yes, the government may have witnesses who will testify to participating in sexual massages — most over 18; some under; some who told the police they lied about their age to gain admission to Mr. Epstein's residence; some who will testify that Mr. Epstein knew they were not yet 18. But their anticipated testimony only punctuates the alleged offenses' purely local nature," they said.

The once-secret agreement with federal prosecutors in Florida has been widely criticized as a sweetheart deal. The criticism has fallen heavily on Labor Secretary Alex Acosta, who played a role in the 2008 plea deal that let Epstein avoid federal prosecution.

The New York charges, which carry the potential for up to 45 years in prison, say Epstein abused dozens of girls at his mansions in New York and Palm Beach, Florida, in the early 2000s.