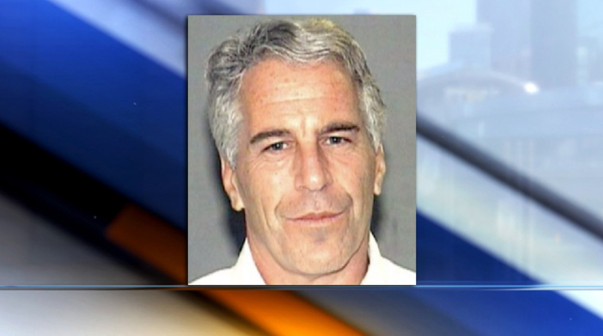 Palm Beach billionaire Jeffrey Epstein pleaded not guilty to sex trafficking charges in New York federal court on Monday after an indictment said he abused dozens of underage girls, some of them as young as 14. 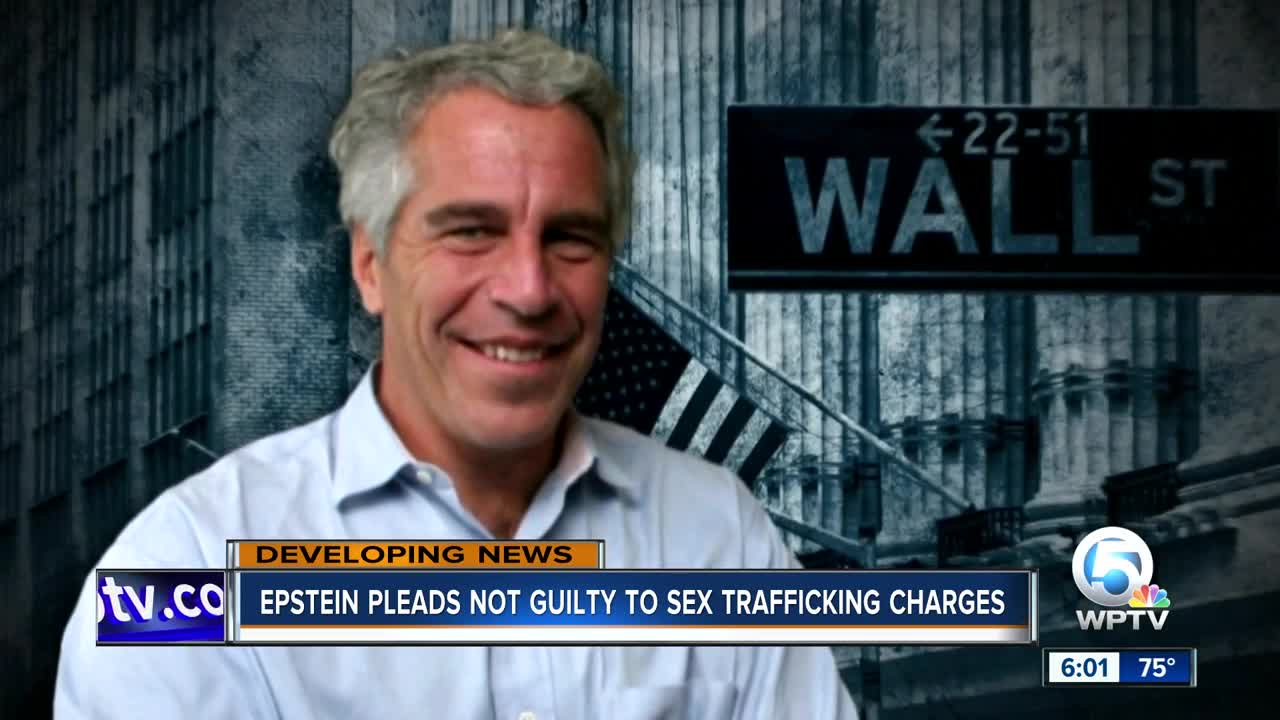 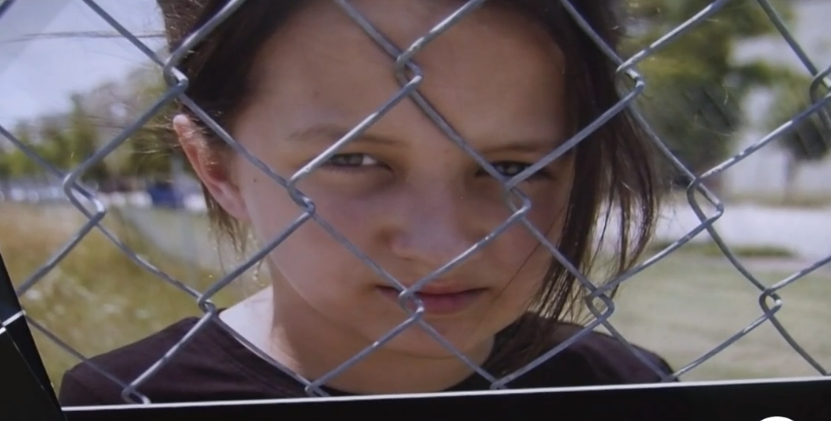 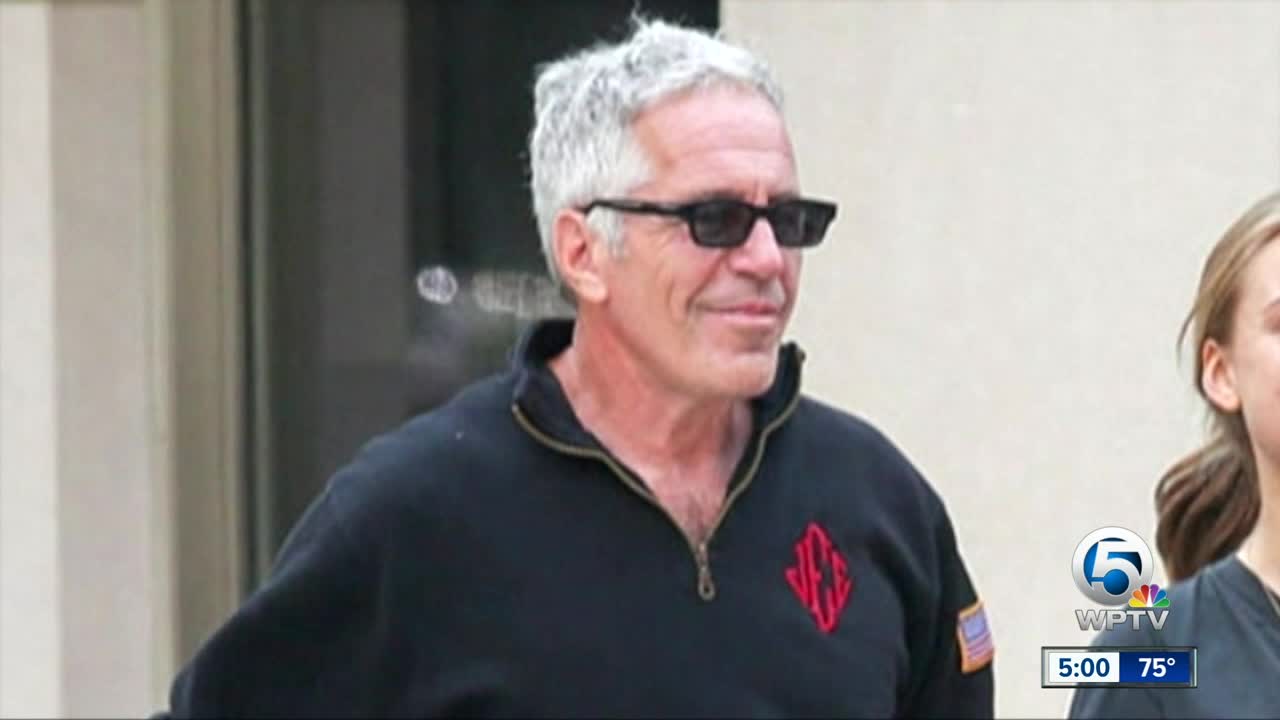 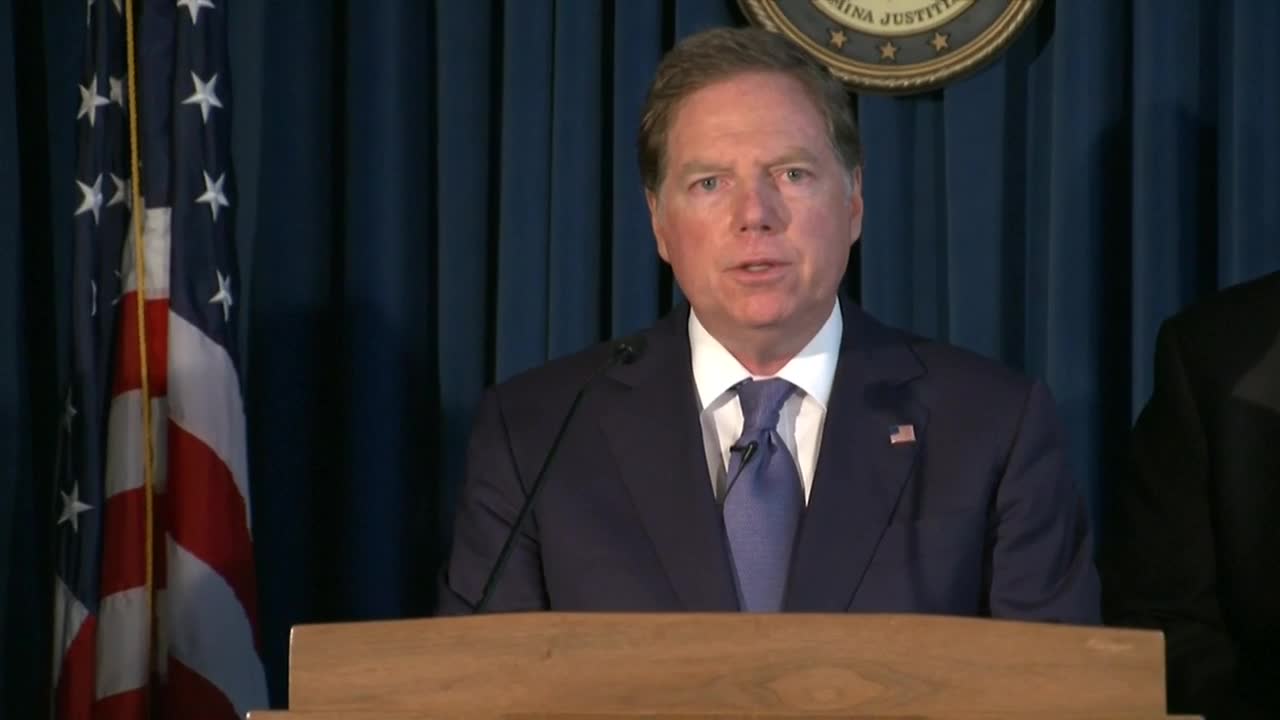 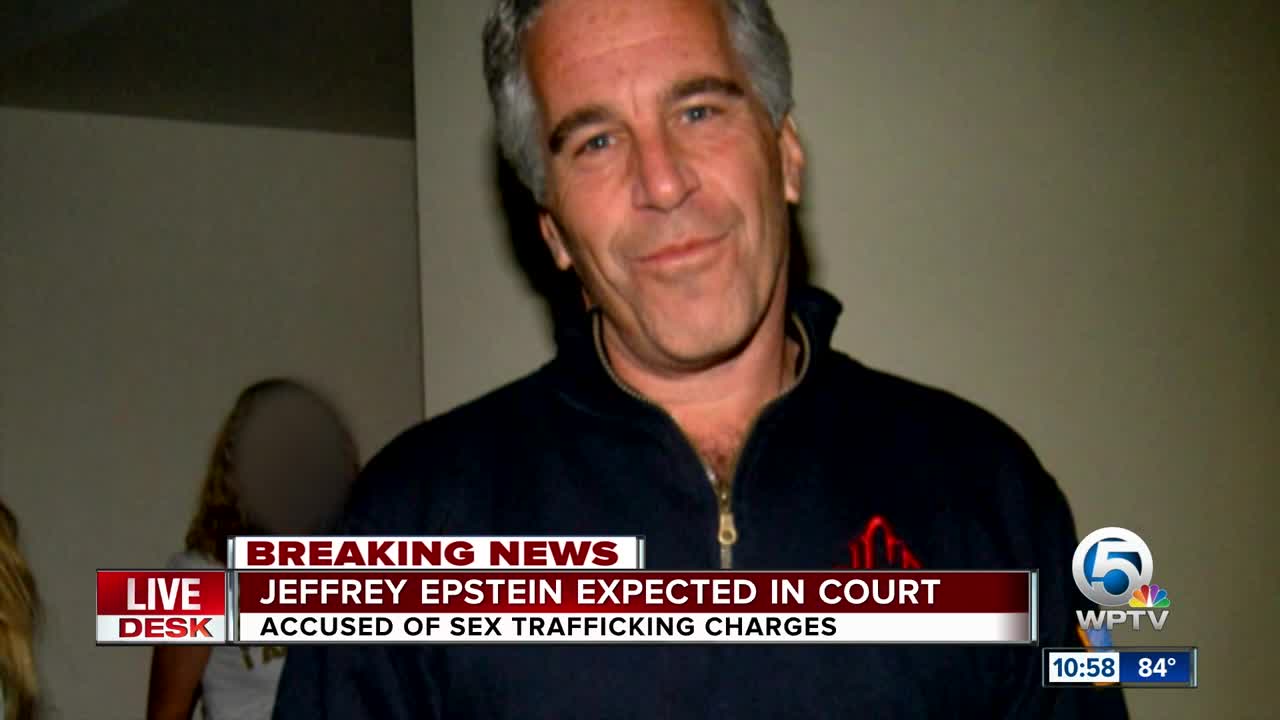 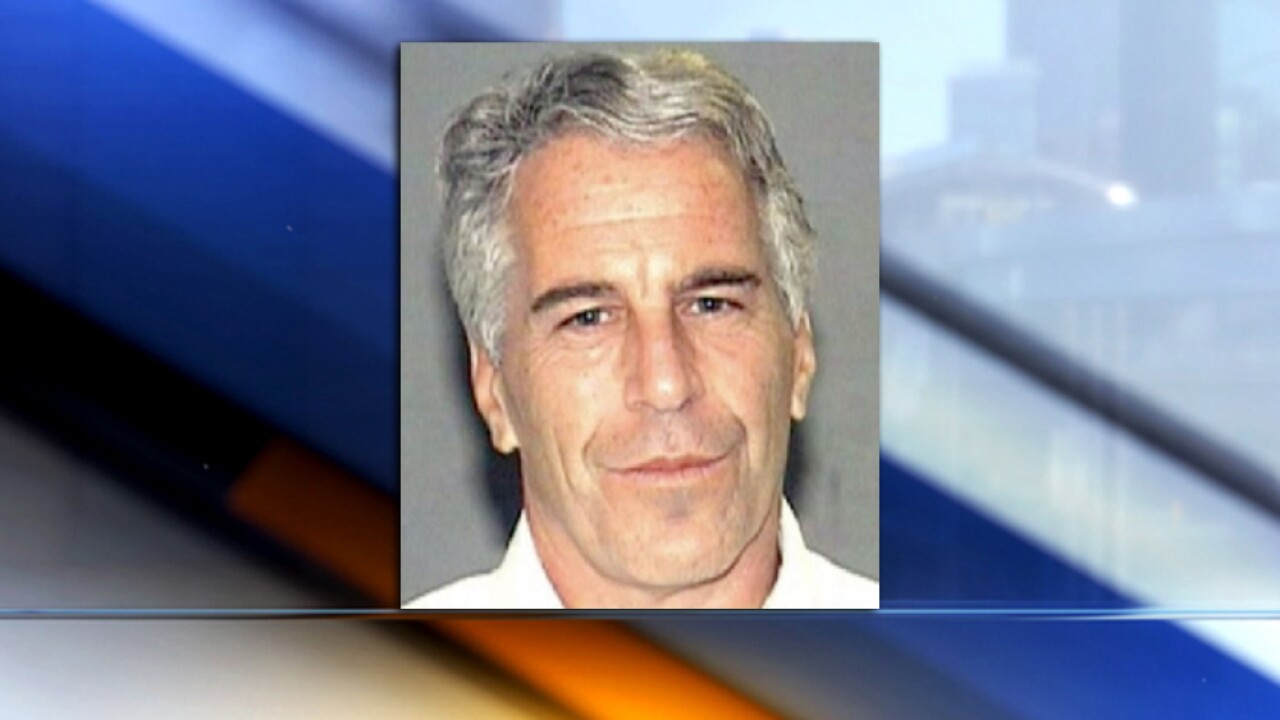 NEW YORK — Palm Beach billionaire Jeffrey Epstein pleaded not guilty to sex trafficking charges in New York federal court on Monday after an indictment said he abused dozens of underage girls, some of them as young as 14.

Epstein, arrested over the weekend and dressed in a blue jail jumpsuit on Monday, will remain behind bars until a bail hearing on Thursday.

Epstein, a 66-year-old hedge fund manager who once hobnobbed with some of the world's most powerful people, was charged in an indictment unsealed Monday with sex trafficking and conspiracy. The charges carry up to life in prison.

He was accused of paying underage girls hundreds of dollars in cash for massages and then molesting them at his homes in Florida and New York.

On Monday, prosecutors said Epstein, a registered sex offender, is a significant flight risk and asked that he be detained until his trial. They added he has three active U.S. passports and has frequently traveled in and out of the country on his private jet.

If you believe you are a victim of Jeffrey Epstein, or have information about the conduct alleged in the Indictment unsealed today, please call 1-800-CALL FBI pic.twitter.com/f3ZMThOxJX

Epstein "intentionally sought out minors and knew that many of his victims were in fact under the age of 18," prosecutors said. He also paid some of his victims to "recruit additional girls to be similarly abused by Epstein."

"In this way, Epstein created a vast network of underage victims for him to sexually exploit in locations including New York and Palm Beach," prosecutors said.

Epstein's lawyer did not respond to repeated messages seeking comment.

At a news conference on Monday morning, the U.S. Attorney's Office said if you or someone you know was victimized by Epstein, please call the FBI at 1-800-CALL-FBI.

Epstein, whose friends have included President Donald Trump, former President Bill Clinton, and Britain's Prince Andrew, was arrested Saturday at an airport in New Jersey, just outside New York City, after his private jet touched down from France. He was being held at the federal lockup in Manhattan.

Former federal prosecutor David Weinstein said there was almost no chance Epstein would be allowed out on bail.

"The guy is a millionaire or a billionaire. He has unrestrained assets," Weinstein said. "If they let him out on a bond, he may take off, go to a jurisdiction where they don't have extradition, and they may never get him back."

Epstein's arrest came amid increased #MeToo-era scrutiny of the 2008 non-prosecution deal that allowed Epstein to plead guilty to lesser state charges while maintaining a jet-set lifestyle that includes homes in Paris and the U.S. Virgin Islands and a Bentley.

Under the deal, overseen by Alexander Acosta, who was the U.S. attorney in Miami at the time and is now Trump's labor secretary, Epstein pleaded guilty to state charges of soliciting and procuring a person under age 18 for prostitution. He avoided a possible life sentence and served 13 months in jail.

The deal also required that he reach financial settlements with dozens of his victims and register as a sex offender.

Acosta has defended the agreement as appropriate, though the White House said in February that it was looking into his handling of the case.

The deal, examined in detail in a series of stories in The Miami Herald, is being challenged in federal court in Florida. A federal judge ruled earlier this year that Epstein's victims should have been consulted under the law about the agreement, and he is now weighing whether to invalidate it.

"The past cannot be undone; the government committed itself to the NPA, and the parties have not disputed that Epstein complied with its provisions," prosecutors wrote in the filing.

It was not immediately clear whether that case and the new charges involved the same victims, since nearly all have remained anonymous.

Epstein's guilty plea involved only state crimes, while the current case involves federal law. As a result, his constitutional protection against double jeopardy does not apply.

According to court records in Florida, authorities say at least 40 underage girls were brought into Epstein's Palm Beach mansion for what turned into sexual encounters after female fixers looked for suitable girls locally and in Eastern Europe and other parts of the world.

Polaris, a Washington D.C. based nonprofit that operates the National Human Trafficking Hotline for the United States, released the following statement about Epstein:

"The charges against billionaire financier Jeffrey Epstein, as well as the tragic history of how this case was handled in Florida years ago, clearly and starkly illustrate the dynamics of how sex trafficking really works. As this case shows - and contrary to what many believe - traffickers do not fit a single stereotype. This case should open people’s eyes to see how wide-ranging the crime trafficking really is. What unites traffickers is the understanding that this is a crime that is fundamentally about the abuse of power over those who are more vulnerable. Traffickers use money, glamour, and/or the promise of a better life, to lure, manipulate, exploit, and control. The dynamics of the crime are the same regardless of the socioeconomic status of the trafficker and whether it takes place in a mansion or on a streetcorner. The punishment should be the same as well. One of the many tragedies here is that the criminal justice system utterly failed to hold a sexual predator accountable the first time around. In the Epstein case, until now, the dynamic that favors those with more wealth and power both made the trafficking possible and also ensured that the accused trafficker got off with a slap on the wrist. We applaud the courage and resiliency of the survivors who have come forward and refused to give up in their fight for justice. We are inspired by the tenacity of the lawyers, journalists, law enforcement, and prosecutors who have stepped up after the initial failure in Florida, and found another way forward. We hope that this time, justice is finally served."