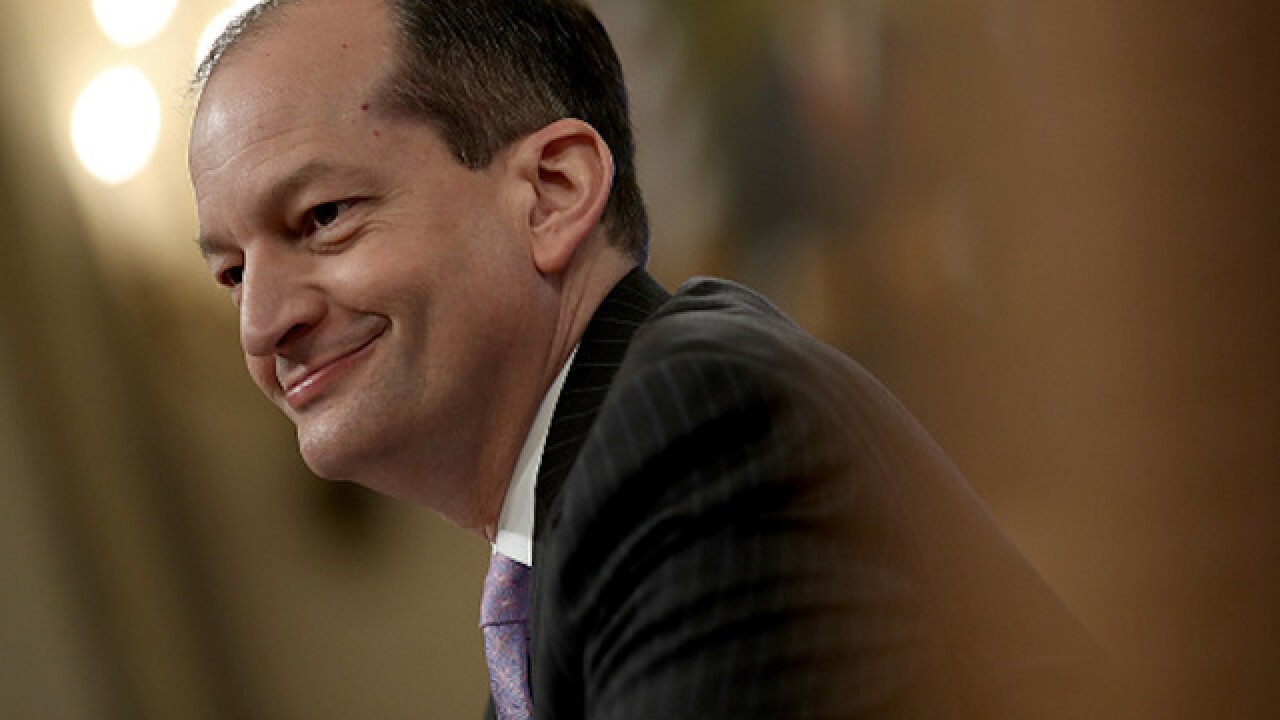 Image copyright 2018 Getty Images. All rights reserved. This material may not be published, broadcast, rewritten, or redistributed.
&lt;p&gt;Alex Axosta on April 17, 2018 in Washington, DC.&lt;/p&gt;

When he was a US attorney in Florida, Labor Secretary Alexander Acosta gave accused pedophile Jeffrey Epstein the "deal of a lifetime," the Miami Herald reported Wednesday.

In a sweeping review of the politically connected multimillionaire's case, the Herald explained how Acosta made an agreement with Epstein to avoid major repercussions for the hedge fund manager, even though a federal investigation identified 36 underage victims.

The report said Acosta forged a deal with one of Epstein's attorneys where he pleaded to two state prostitution charges, ultimately serving only 13 months and avoiding a federal trial. The agreement, the Herald said, "essentially shut down an ongoing FBI probe" and further granted immunity to "any potential co-conspirators" in the case.

Epstein also registered as a sex offender and paid restitution to the victims identified by the FBI.

The paper said it learned that Epstein provided information to federal investigators, but did not detail what the information was. It did note, however, that the Epstein case occurred around the same time as the economic crisis of 2008 and that records showed Epstein was a witness in the prosecution of executives at the failed investment bank Bear Stearns.

The Herald said neither Epstein nor his attorney Jack Goldberger responded to its requests for comment. CNN has also reached out to Goldberger for comment.

Eric Holland, a spokesperson for the Department of Labor, said in an emailed response to the report that "this matter has been publicly addressed previously, including during confirmation hearings."

Sarah Schall, a spokesperson for the Southern District of Florida, told CNN the office declined to comment.

The Herald said it found about 80 women Epstein allegedly molested or sexually abused over a five-year period, and the report charged that even Epstein's state prison time was lax, being housed in a private wing at the Palm Beach County jail and allowed work release privileges.

Trump nominated Acosta to lead the Department of Labor last year after his first choice, Andrew Puzder, withdrew himself from contention.

Acosta defended his handling of the Epstein case during his confirmation hearing.

The report noted a pair of lawsuits await further action in the courts, and in one, the Herald said, women argue Acosta and other federal prosecutors broke the law in their handling of the case.