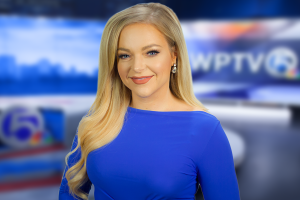 Merris Badcock is a Contact 5 investigative reporter for WPTV. She specializes in crime investigations, and focuses on telling stories that will change your life and community for the better.

Previously, Merris was a reporter and fill-in anchor for WTKR/WGNT, the CBS/CW affiliate in Norfolk, Va. Shortly after joining the team, she quickly became one of the station's lead investigative reporters.

Her work uncovered the shady history of an accused serial killer and the joint state and FBI investigation into her past. Merris’s investigations into teacher salary discrepancies secured raises for teachers in districts that originally wanted to take away salary bumps.

Along with investigations, Merris also served as a general assignment reporter actively covering breaking news, high-profile court cases, jailhouse interviews, and even went from 0 to 165 miles per hour in two seconds while visiting one of the most dangerous environments in the world: the flight deck of an active Navy aircraft carrier.

Merris began her broadcasting career at WDMV in Maryland. Her investigations into the heroin epidemic inspired the formation of several regional coalitions across the four-state coverage area, and the beginnings of a government-sponsored recovery center in Berkeley County, W.Va.

But it wasn’t all about drugs. One story brought her inside the White House to cover President Obama’s Presidential Medal of Freedom ceremony. Going live from the north White House lawn was one of the coolest experiences she had as a rookie reporter.

At WDVM, Merris also served as the primary fill-in anchor for all newscasts.

A Central Florida native, Merris grew up with lots of pets, including a potbelly pig named Rambo and a herd of goats named after fruits and vegetables. She is an honors graduate of Florida State University, and during her time in Tallahassee, found her love for broadcasting reporting for Seminole Sports Magazine and SunSports (now Fox Sports Florida).

Merris is a member of Investigative Reporters and Editors and RTDNA. It is hard to pull her away from her work, but when it happens, Merris loves volunteering, working out, trying new restaurants, traveling to new places, visiting the beautiful South Florida beaches, and cheering on the Florida State Seminoles!