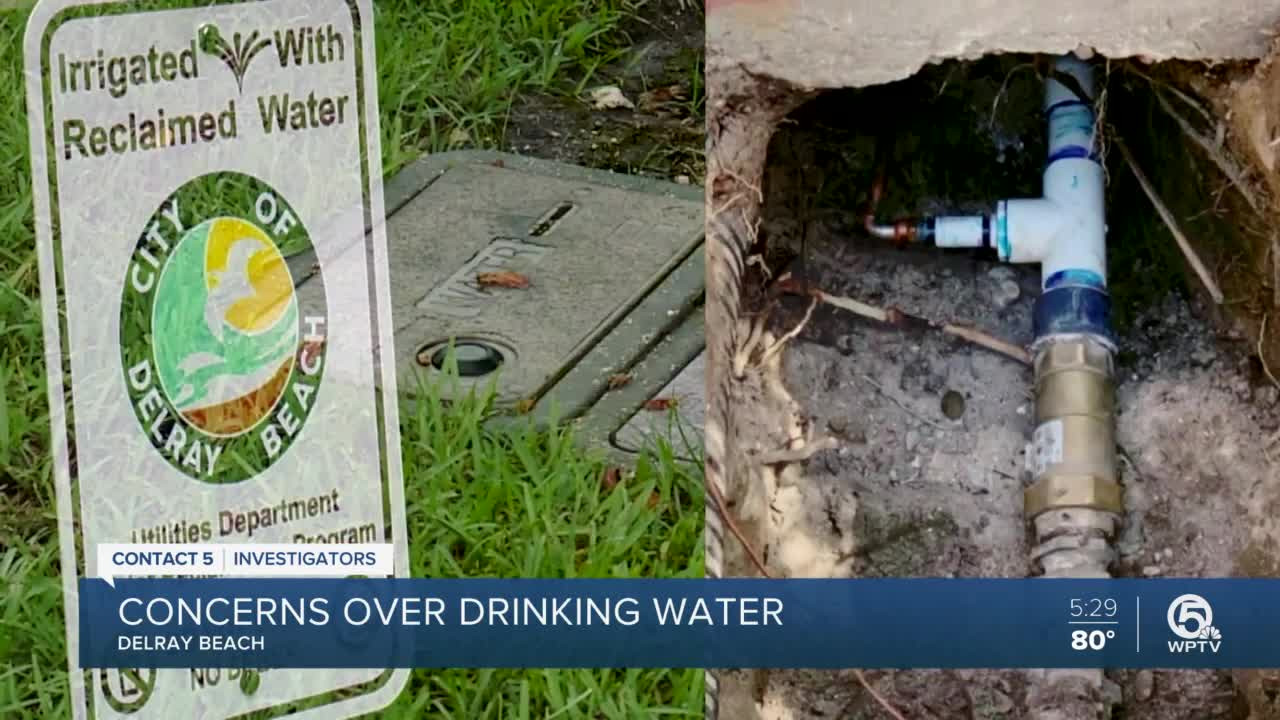 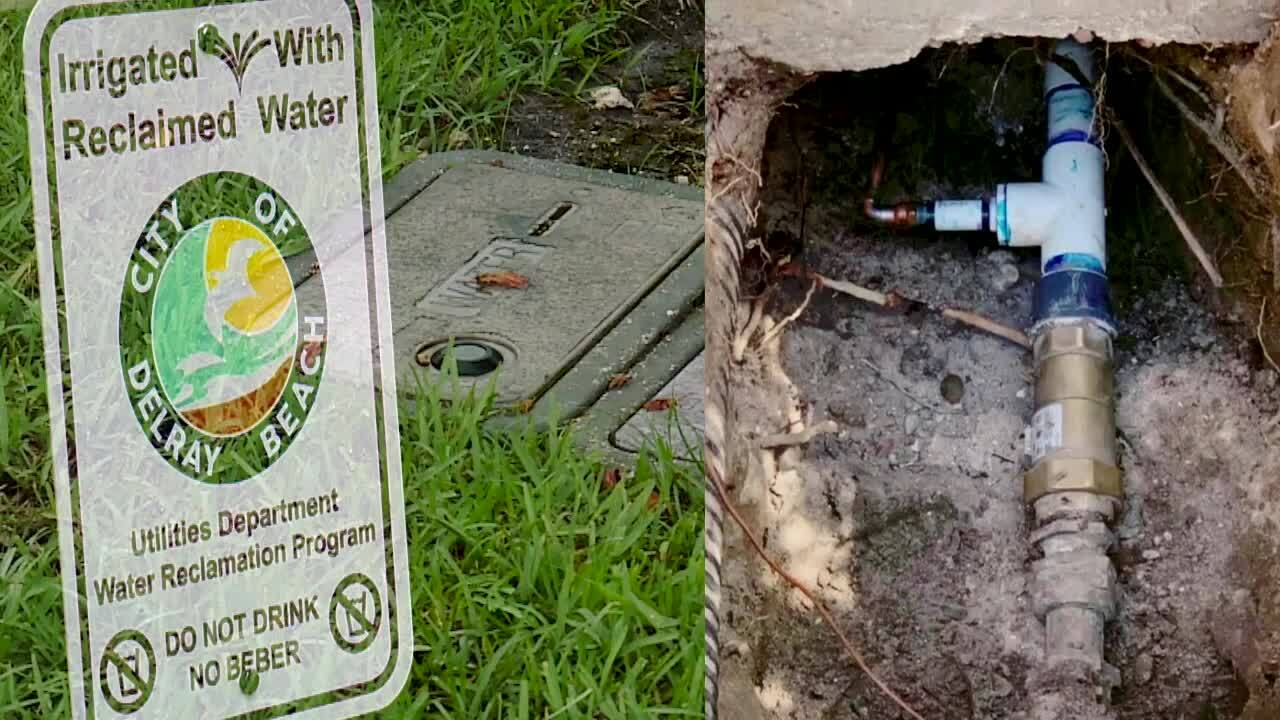 DELRAY BEACH, Fla. — The findings and conclusion of an outside review of Delray Beach's reclaimed water system reveal a "lack of institutional control" by the city.

Reclaimed or treated wastewater is typically used for things like watering a lawn.

However, the report found a "lack of institutional control," pointing to "a failure to have the appropriate resources, funding, oversight, policies and internal expertise."

The review was requested months ago after a whistleblower claimed cross connections made people sick. That's when reclaimed water gets connected with drinking water, which should not happen.

"They don't have control of portions of the utility system they need to control," Bloetscher told Contact 5. "The expectation of people that are receiving drinking water at their house is what they get out of the tap is safe, and anytime that you create a situation where people can question that, that's problematic, and I think you have that situation here."

The report identified a total of three cross connections discovered in the city.

According to the report, an outside contractor "indicated that formal oversight for cross connection inspections was with the city's cross connection specialist." Except the city does not have that position.

"In a city with 1,300-plus backflow systems with cross connection potential, you should have that position," Bloetscher said.

The report also claims it's unclear if a "contracted backflow inspection company actually inspected" the system "on a regular basis."

"Nobody has any records," Bloetscher told Contact 5. "They can't even tell me who that person was or that company was."

This comes amid a Florida Department of Health investigation into cross connections in the city and a separate investigation by Palm Beach County's inspector general.

"The lack of control leads to the potential for people to put themselves in a situation where their health is not protected because they could drink reclaimed water without realizing it," Bloetscher said.

The report also offered 10 recommendations. Delray Beach commissioners are expected to discuss the report next month.

Contact 5 requested comment from the city on the report but did not receive a response until the next day.

The city takes the concerns voiced by the Florida Department of Health (FDOH) and our residents very seriously and has taken action to ensure program compliance, as well as the health, safety, and welfare of our community.

In May 2020, the city contracted with Public Utility Management and Planning Services to perform a forensic review of the city's reclaimed water system. The final report was presented to the city in late-October 2020 and brought forth 10 recommendations. Many of the report's suggestions have already been directly addressed by the city through a series of actions and initiatives, as described below.

Since coming to the city in June 2020, Utilities Director Hassan Hadjimiry has spearheaded several initiatives, including changes to staffing, policies and operations meant to address the concerns over the city's reclaimed water program.

Dir. Hadjimiry established a new Regulatory Compliance Section to implement the Cross-Connection Control (CCC) and Industrial Pretreatment Programs. As part of these programs, a full audit of all accounts requiring backflow preventers is being performed. An existing open position is being reclassified to a cross-connection control coordinator. That individual will be responsible for tracking annual inspections and will oversee the Cross-Connection Control Program.

As part of the Cross-Connection Control program, the city plans to begin using a web-based system for testing, tracking and reporting of backflow preventers. This new system will automatically notify owners of annual testing requirements and reduce the potential for data entry errors.

The city is improving management of the water and sewer delivery systems through the establishment of a Utilities Engineering Section within the Utilities Department. A principal professional engineer position has already been advertised and will be filled promptly. In addition, Commission approval to add four new positions within the Engineering Section for a professional engineer, plan reviewer/engineer and two inspectors is being sought. These four new positions will be brought to the city commissioners on Nov. 17 for approval and will require a budget amendment.

As of February 2020, the city initiated a full inspection of all reclaimed water customer sites to eliminate any cross-connection and ensure backflow connections are in full compliance prior to resuming reclaimed water service to its customers. The city's utilities staff has been in constant communication with the FDOH, providing documentation of installation, inspection, maintenance and replacement of backflow prevention devices and assemblies.

The city plans to implement enhanced public education in accordance with AWWA Manual; including providing instructions for compliance with design standards and annual notifications to ensure that customers are informed about the origin, nature, and characteristics of reclaimed water; how reclaimed water can be safely used and its imitations. As part of the commitment to outreach and education, the city's website has been updated to include educational information and videos on the topic of reclaimed water and its uses.

To help residents comply with the requirements of the reclaimed water program, the utilities staff has begun working closely with staff from Development Services, code enforcement and the city attorney's office. Greater cooperation between departments will mean greater oversight of the reclaimed water permitting process and enforcement of the city's ordinance, with the understanding that customers who chose to disconnect without proper oversight are potentially endangering the safety of the public water provided to other city customers.

In order to protect marine life from harmful fresh water discharges and to make more potable water available for the public drinking water supply, the state has set goals for wastewater treatment plants to virtually eliminate their dependence on ocean outfall structures and to reuse 60 percent of this reclaimed water for irrigation by the year 2025. In order to meet the state's targets by 2025, the city will work closely with residents to increase participation and continue education on the environmental benefits and cost savings provided by the reclaimed water program. Part of the outreach will include the city's Water Rate Study, which will highlight for residents the savings possible when using reclaimed water for irrigation in comparison to potable water.