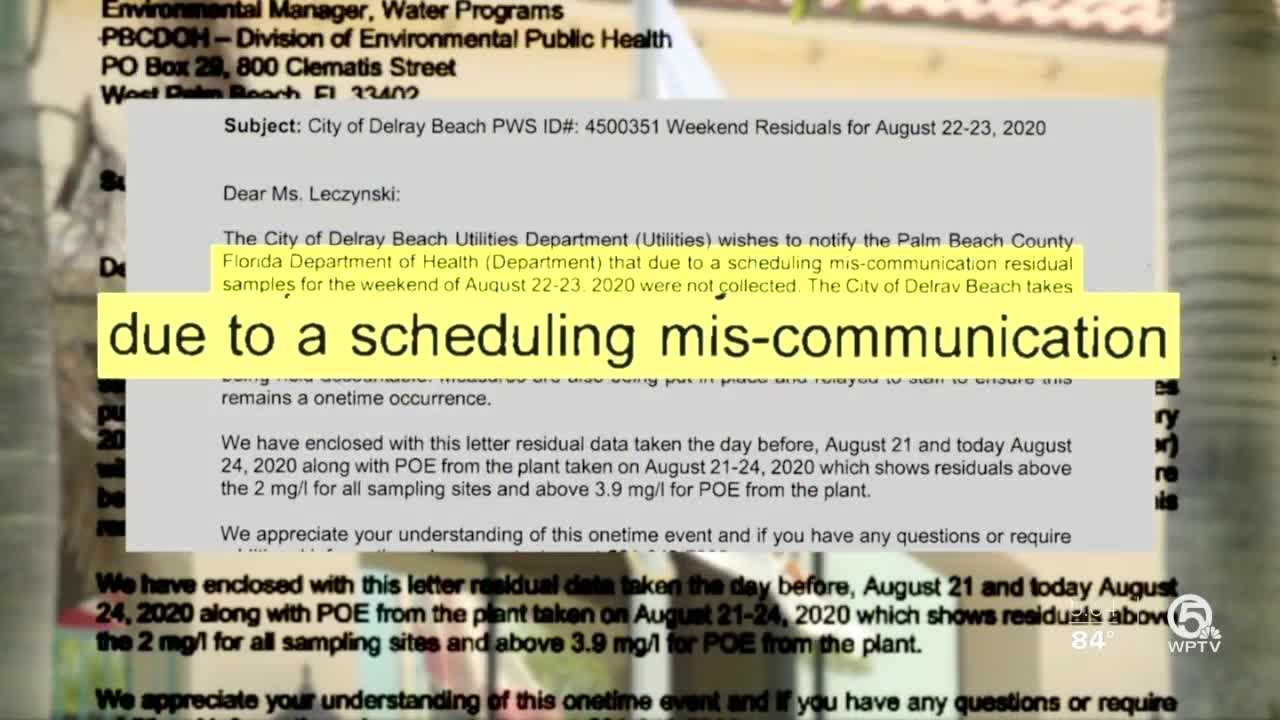 Delray Beach has been slapped with a penalty by the Florida Department of Health, but the city says it was the result of a "scheduling mis-communication."

DELRAY BEACH, Fla. — The city of Delray Beach's Utilities Department has been slapped with a penalty by the Florida Department of Health, according to a demand letter obtained by Contact 5.

Documents obtained by Contact 5 show the city told the Florida Department of Health on Aug. 24 that, "due to a scheduling mis-communication," it did not collect residual samples for an entire weekend from eight different sample points Aug. 22-23.

The residual samples collected from sampling points are used to check the chlorine levels in the water, according to the city.

The documents show Utilities Director Hassan Hadjimiry notified the Florida Department of Health about the incident.

"The staff member that was scheduled to collect the chlorine residual sample that weekend missed the collection. Director Hadjimiry notified the FDOH the morning of Monday, Aug. 24th via telephone and followed up with them in writing. Disciplinary action was taken on Assistant Water & Sewer Network Manager. During the 180 weeks (almost 4 years) of sample collections, this was the only missed sample collection. Additionally, FDOH ended the consent order (WP-065-16) on Sept 11th, 2020."

Documents show as a result of the missed sampling event and for failing to comply with a consent order, the city paid the Florida Department of Health $2,800 in penalties.

The city said tax dollars were not used to pay the penalty.

This latest development comes as Palm Beach County's inspector general notified the city Monday of an investigation involving the utility.

The city also received a warning letter from the Florida Department of Health on Sept. 10 about possible violations of law regarding the cleaning and record-keeping of water storage tanks.

Hadjimiry told Contact 5 that this was the only missed sample collection in almost four years and that data collected before and after and from the plant provide assurances that satisfactory disinfection levels were maintained in the distribution system.