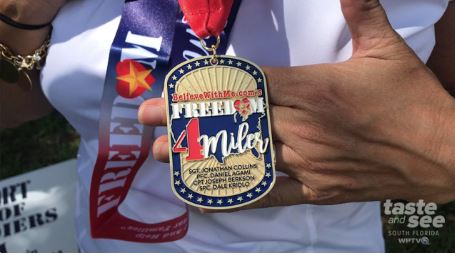 The families of fallen soldiers are honored in South Florida annually at the Freedom 4 Miler in Tequesta. This year, because of the coronavirus pandemic, the race has gone virtual to help Gold Star families all year long. 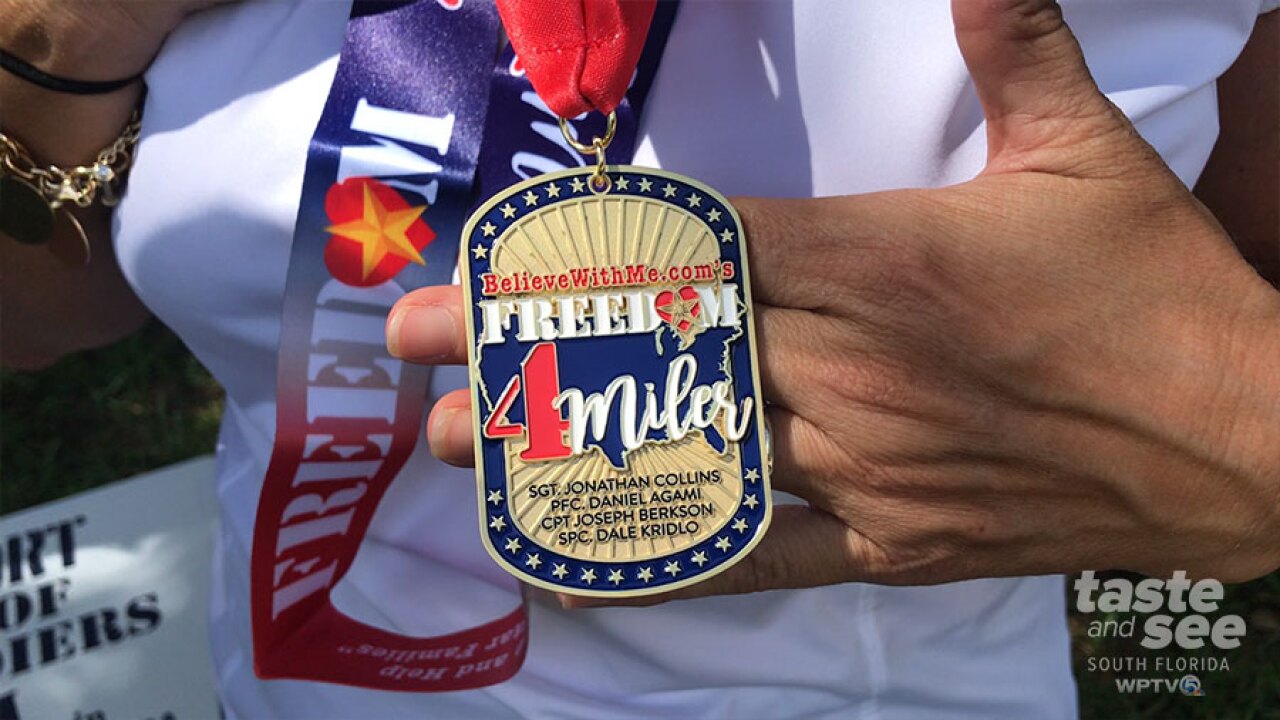 PALM BEACH GARDENS, Fla. — The families of fallen soldiers are honored in South Florida annually at the Freedom 4 Miler in Tequesta. This year, because of the coronavirus pandemic, the race has gone virtual to help Gold Star families all year long.

Normally, 2,000 runners would be meeting in Tequesta this weekend to run a timed race on July 4.

"Because of COVID, we've had to change quickly and pivot and become a virtual race," said race organizer Lyette Reback.

On Friday, racers came to a home in Palm Beach Gardens for drive-through packet pick-up, where they were greeted by hundreds of American flags gracefully blowing in the wind.

Before the coronavirus pandemic, organizers thought they would raise $150,000 to help pay for some important programs for Gold Star families.

Reback added that her Christmas project, which helps the children ofGold Star families, is in jeopardy.

"We're going to have to get real creative with how we're going to come up with those finances to pay for our Christmas project, which alone is $200,000," said Reback.

You can still sign up for the 'Freedom 4 Miler' to help out military families. I'm posting details soon to @wptv.com. "Seen on 5" section. pic.twitter.com/SOldh93pVy

While some of the elements of the race have changed, others are the same.

The race honors four fallen soldiers each year. This year's medal has the names of four men who have died and the American flag-style t-shirts have facts about the soldiers.

Among those men is Lauren Berson's dad, who died in Vietnam 48 years ago.

"Husband, father, award-winning ROTC cadet, captain in Vietnam," said Berson. "They are honoring him on the third mile."

Berson added that honoring her father makes her want to cry.

"You have no idea. We work so hard to bring awareness to Gold Star families and, it's so special," said Berson. "This [medal] is something concrete, [and] our monuments are concrete. They are reminders that freedom isn't free. And on July Fourth when we celebrate our freedom, we got to remember who gave it to us."

Organizers said they have extended the deadline to register for the Freedom 4 Miler to July 4. Then you have until July 7 to take that virtual run.

Sign up for the Freedom 4 Miler by clicking here.

If you can't make it to packet pick-up on Friday by 7 p.m. at 4109 Hickory Drive in Palm Beach Gardens, the organization said they will still get participants their medal and t-shirt and a race bib that has a fallen soldier's name and give you a race Spotify soundtrack.

"It's just a way for us to stop and remember who really bought and paid for our independence as we celebrate the Fourth of July," said Reback. "There are 1.3 million men and women that have paid for me to have those freedoms."