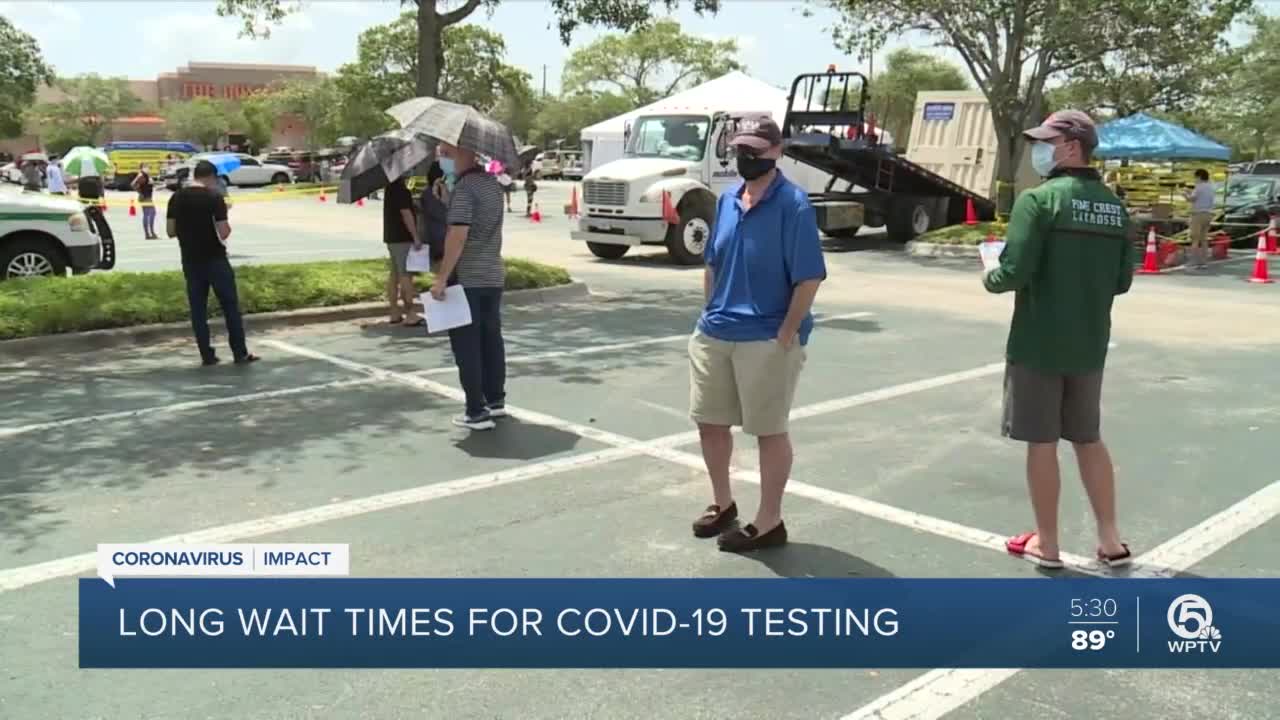 Demand for COVID19 testing is rising along with the spike in positive cases in Florida. 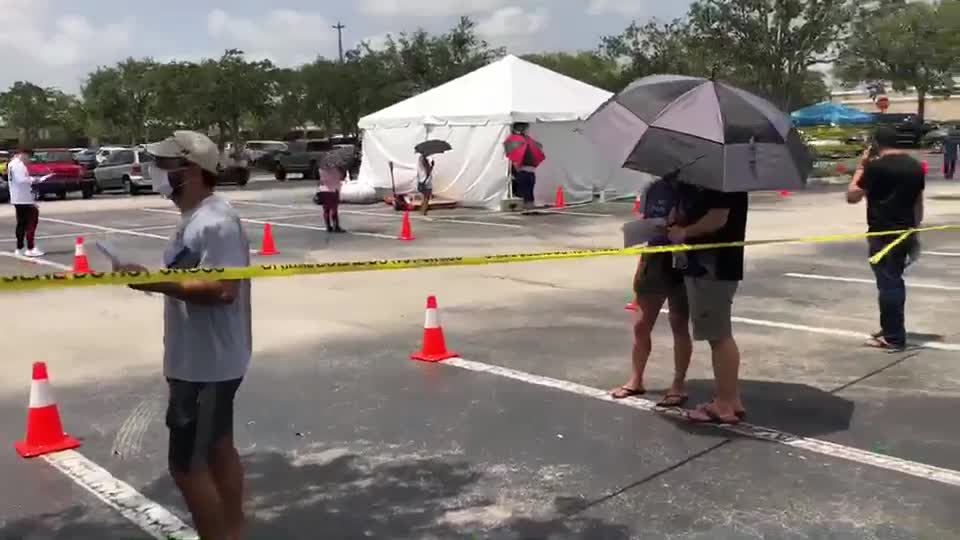 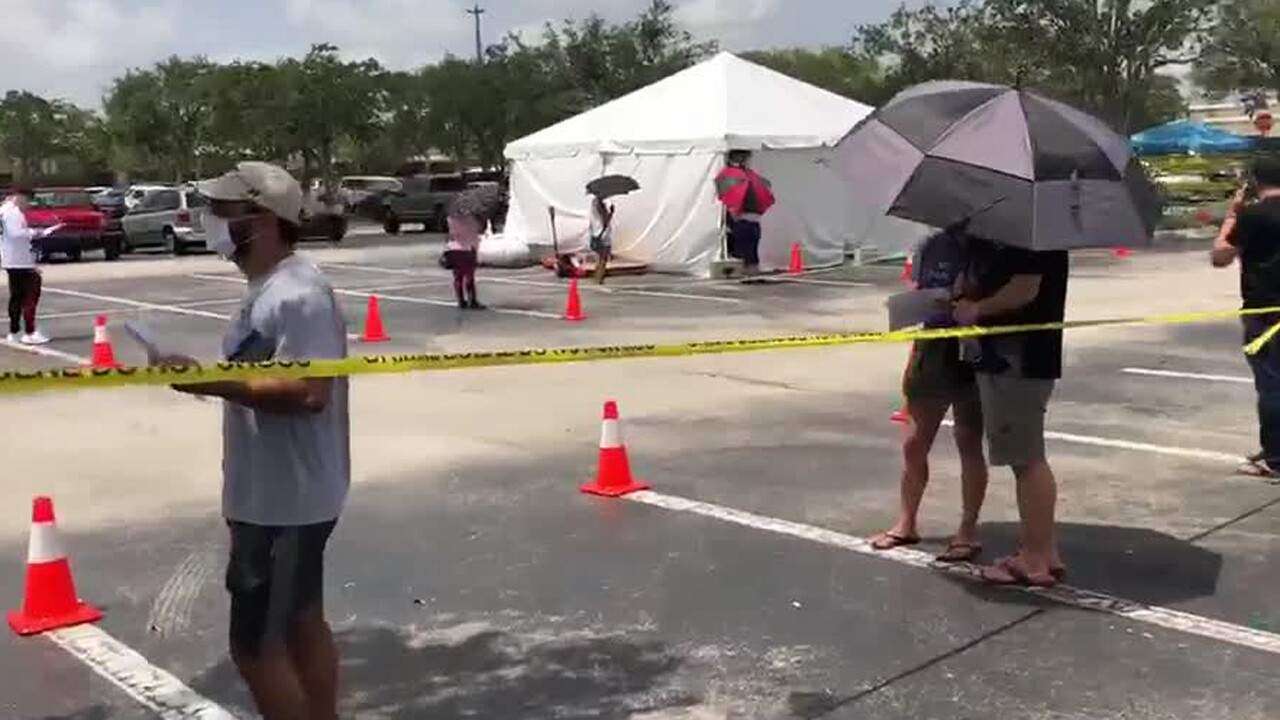 WEST PALM BEACH, Fla. — With the increase in coronavirus cases, testing sites at many locations have also seen a jump in demand.

In the past few weeks, long lines have resulted in expanded wait times at sites in Florida, Texas and other states.

There was a long line of people waiting for a coronavirus test just after noon Tuesday at a Home Depot located at Glades Road and U.S. 441. The people, who looked to be a variety of ages, were waiting in the hot sun with many holding umbrellas to shade themselves.

"I definitely need to get tested to find out for myself. I have a baby," said Adrianna Amaya, as she waited on line Tuesday at the walk-up testing site. "So far, I’ve been waiting around 30 minutes, and this is the worst part because I’m out of the shade."

Amaya and others stood under the hot sun waiting for a COVID-19 test in West Boca Raton. Many in the line were at the testing site for good reason.

"One of my friends spent Father’s Day with her father, and he tested positive. She found out two days ago, and now she's getting tested and has a fever," said Amaya.

"My son here went out with four of his friends boating last weekend, and it turns out one of their girlfriends tested positive,” said Eric Yellin, who was in line for a test.

"A lawyer in my office was just hospitalized over the weekend with COVID," said Helene Handin, who was also waiting in line.

Handin said the line was moving, but she was told the wait time would be about two hours to receive a test.

The stories from the people waiting for testing seem to confirm the data of rising cases that have occurred since reopening.

It has also sparked large crowds to testing sites, like the walk up one at the Home Depot.

This site is run by the state and WPTV is told wait times can last up to three hours. A second site testing site recently opening at the Town Center at Boca Raton.

The Palm Beach County Health District states on its website they currently are not taking appointments at their five testing sites, which span from Jupiter to Boca Raton, because of high demand.

County officials said testing is expanding on the private side.

"We're seeing every day MD Now, CVS, Walgreens other locations within the existing health infrastructure that are continuing to open up and offer testing for residents throughout the county," said Assistant County Administrator Todd Bonlarron.

The Home Depot site in West Boca Raton is free to Florida residents and no appointment is needed. On some days, the site shuts down early after hitting its maximum of 300 tests a day.

The number of locations offering tests continues to increase. Still, some lawmakers and medical experts said last week they worry that Florida won't be able to handle the heightened demand.

Some health experts attribute the rise in demand to employers wanting to test returning staff and an increase in general health concerns.

Florida recorded 6,093 new coronavirus cases and 58 new deaths on Tuesday, according to data provided by the state.