Puerto Rico and the Virgin Islands braced for heavy rains and strong winds Monday as remnants of the new season's first hurricane provided an initial test of how far they've recovered from last year's devastating storms. 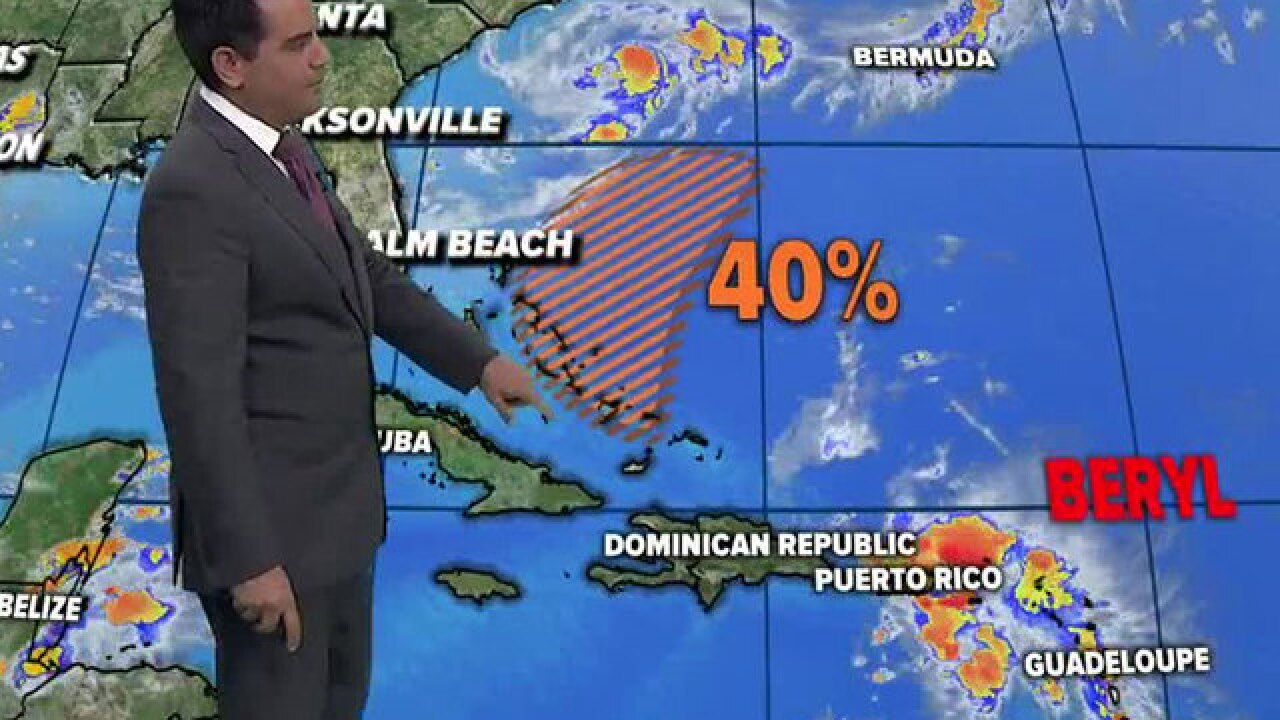 Tropical Storm Beryl disintegrated after rushing over Dominica and into the eastern Caribbean, but the U.S. National Hurricane Center said the remnants still could bring 2 to 3 inches (5 to 8 centimeters) of rain pounding down on homes still damaged by September's Hurricane Maria. Forecasters said this could unleash flooding and landslides in Puerto Rico and the U.S. Virgin Islands.

Outages were already reported across Puerto Rico early Monday as Gov. Ricardo Rossello urged people without sturdy roofs to move in with relatives or go to one of 14 government shelters that have opened.

Some 60,000 people in the U.S. territory still have only tarps for roofs blown off by Maria, and more than 1,500 customers are still without power more than nine months after the storm.

The Category 5 hurricane caused more than an estimated $100 billion in damage, killed dozens of people by the most conservative estimates and destroyed up to 75 percent of electricity transmission lines.

The National Weather Service issued an alert warning that heavy showers and winds of more than 50 mph (80 kph) were approaching Puerto Rico's east coast Monday morning. The storm's center was expected to pass just south of the island.

The U.S. Virgin Islands, meanwhile, announced that schools and government offices would be closed in St. Croix.

Beryl, which had been the Atlantic season's first hurricane, was losing tropical storm status late Sunday when it crossed Dominica, another island that had been battered by Hurricane Maria, which hit as a Category 5 storm and killed dozens of people.

Marshall Alexander, with Dominica's Meteorological Service, told The Associated Press that no landslides or widespread flooding have been reported. A curfew also has been lifted.

"Definitely, we were spared the worst," he said.

The storm's remnants were expected to pass just south of Puerto Rico, which could see sustained winds of 15 to 25 mph (25 to 40 kph) and gusts of up to 50 mph (80 kph), forecasters said. It also dumped torrential rain in the U.S. Virgin Island of St. Croix, with the National Weather Service warning of winds of more than 30 mph and fallen trees and light posts.

Those living near Puerto Rico's south coast, the first region hit by Maria, were wary of the new storm even if it was no longer a hurricane.

"We're a little bit scared because of what we've been through," said Jose Bultron, a delivery man in the southeast town of Humacao. "This brings back memories ... but we forge ahead."

Flooding is a big concern for those still living in homes that have not been fully rebuilt since Maria. Lourdes De Jesus, who traveled from West Springfield, Massachusetts, to help repair her mother's house in southeast Yabucoa, said the roof consists of tarp and recycled zinc and leaks even during a light storm.

"I don't know what we're going to do," she said. "We don't have the money to spend on zinc roofing."

Meanwhile, Tropical Storm Chris was squatting on Monday about 215 miles (345 kilometers) off the coast of the Carolinas. Forecasters expect it will gain hurricane strength before moving up Gulfstream waters on a path that could cause life-threatening surf on East Coast beaches this week.

Chris had top winds of 60 mph (95 kph) Monday morning, and was expected to remain nearly stationary through Tuesday before moving northeastward as a hurricane. It was far enough out to sea that no coastal watches or warnings were in effect, even for the closest point of land, Cape Hatteras, North Carolina.