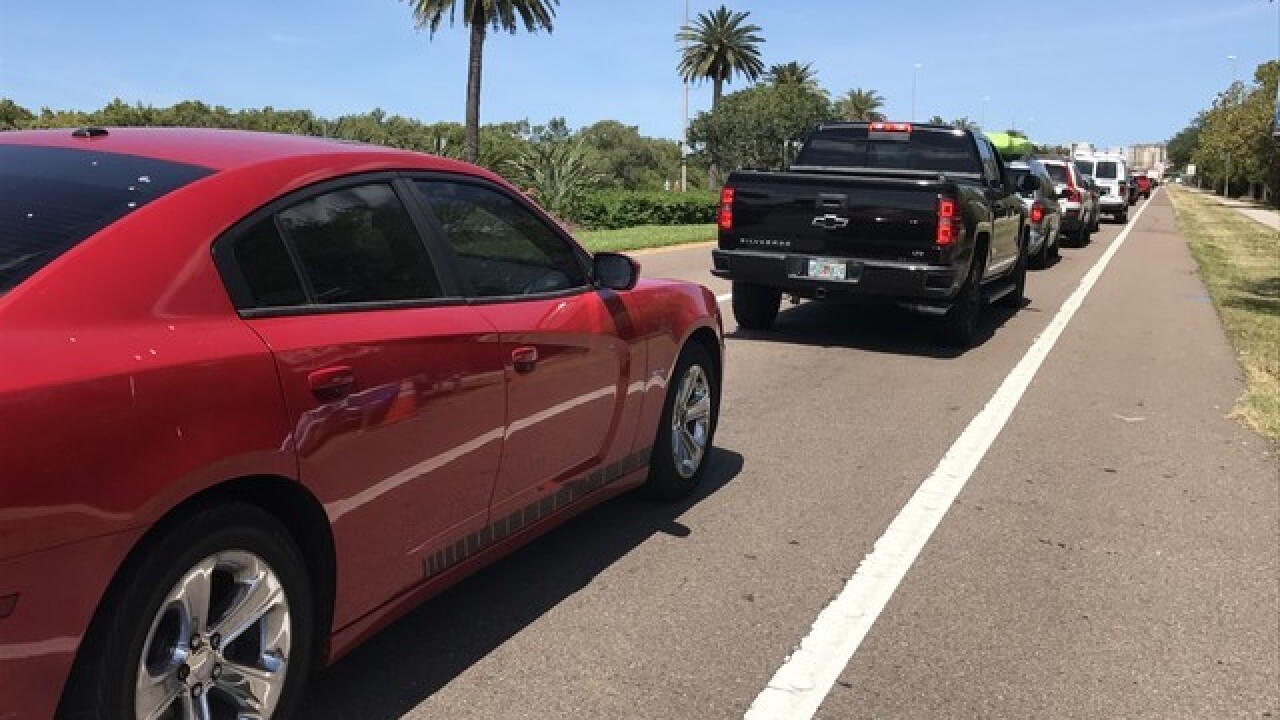 ATLANTA (AP) -- Floridians fleeing Hurricane Irma have turned freeways across the Southeast into red ribbons of brake lights as they head elsewhere - to Atlanta, Montgomery, Nashville - to bunk with relatives, stay at campgrounds or grab hotels before the massive storm makes landfall.

Because Interstate 75 north leads straight to Atlanta, thousands of the evacuees have funneled into the city. Other cars and trucks with Florida plates, a few carrying fishing boats, trekked on to Tennessee.

"We just packed the car up again like Okies and we're going to Memphis," Suzanne Pallot of Miami said Friday on her cellphone, somewhere on a stretch of Interstate 20 near Birmingham, Alabama.

Pallot traveled 21 hours from Miami to Atlanta, arriving Thursday in a Mazda SUV packed with four other people, their luggage and two cats. She and her brother are sharing the back seat with his luggage in the middle, she said.

In Florida, they found lines for gas 100 to 150 cars long. Pallot and her companions started looking for an available hotel room in Ocala, Florida, and went nearly 200 miles into Georgia, still searching. "There was absolutely nothing," Pallot said.

Others wanted no part of sitting in traffic for hours on end.

Monica Scandlen hopped a flight Tuesday from Orlando, near where she lives, into Nashville with her 9-year-old daughter.

It wasn't your typical coming-back-from-vacation crowd, she said.

"You could tell they weren't Disney families, because we all looked sort of last minute - and a little worried," said Scandlen, who is staying with friends in Franklin, Tennessee. "There were a lot more pets than I'm used to seeing."

Evacuees were being welcomed at Atlanta Motor Speedway, Bristol Motor Speedway and Talladega Superspeedway, which all opened vast campgrounds to Irma refugees.

John Glowacki of Bonita Springs said he drove his RV north on I-75 "sometimes at 5 mph, sometimes at 55, but it took us two days to get here," he said Friday at the Atlanta speedway.

"All the campgrounds from the Florida border to north of Atlanta are all filled, but we heard that we might be able to come to the Atlanta speedway," he said.

Further north on I-75, Knoxville, Tennessee, tourism officials welcomed evacuees on their website, saying the city is "standing true to our Tennessee Volunteer spirit." Some hotels were offering cheaper rates for guests fleeing the storm.

Officials for the college town warned, however, that a University of Tennessee football home game this weekend meant hotel space was already tight.

Some people offered to open their homes to evacuees.

Brittany Baugh, an Orlando native living in Nashville, set up a "Florida to Nashville Hurricane Evacuees" group on Facebook for people to offer and find places to stay. More than 500 people have joined.

"I just want people to know there are options," Baugh said. "We can make something work for just about anything."

Irma could lash Atlanta with tropical storm force winds by the time it reaches the city late Monday or early Tuesday, the National Weather Service said. Tornadoes spinning off from the storm's outer bands could pose another threat in metro Atlanta, forecasters said.

The group's second exodus, from Atlanta to Memphis, "ended up being a really good move because now we can be out of the whole thing," she said.

Pallot said she's stayed in Florida for every hurricane in all of her 73 years, "and this is the first time I actually left."

Georgia officials hope to have more than 50 shelters with 7,000 beds available by Saturday, said Homer Bryson, director of the Georgia Emergency Management and Homeland Security Agency.

Even more drivers will be headed to central Georgia on Saturday, when state officials turn all lanes of Interstate 16 into a westbound evacuation route for residents along Georgia's coast.

"It's going to be a slow go," said Russell McMurry, commissioner of the Georgia Department of Transportation. "Pack your patience."