'I would like to see a way for that game to happen,' governor says 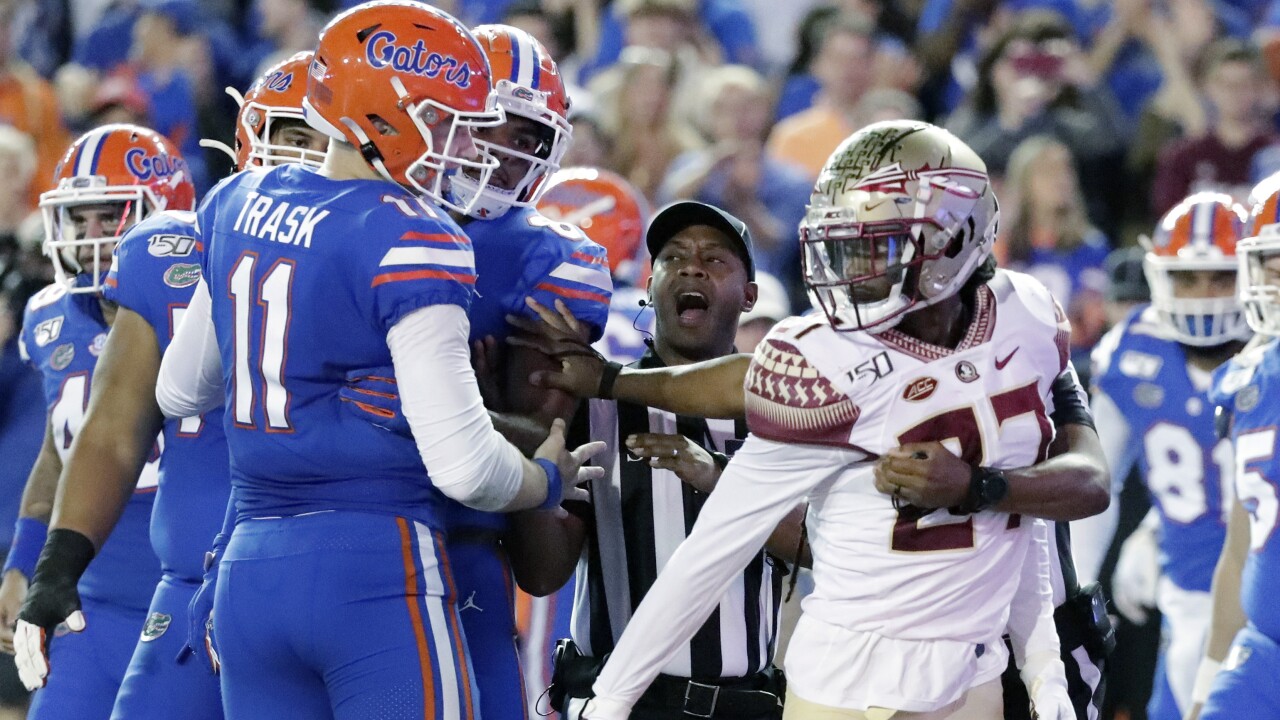 (Copyright 2020 The Associated Press. All rights reserved. This material may not be published, broadcast, rewritten or redistributed.)
John Raoux/AP
Officials break up an argument between Florida quarterback Kyle Trask and Florida State defensive back Akeem Dent during the first half of their rivalry game Saturday, Nov. 30, 2019, in Gainesville, Fla.

JACKSONVILLE, Fla. — There could be hope for the annual football game between the University of Florida and Florida State University in 2020.

"I would like to see a way for that game to happen," Gov. Ron DeSantis said Thursday during a news conference in Jacksonville to discuss the importance of sports in the Sunshine State.

Florida and Florida State have played each other every year since 1958, but the rivalry is on hiatus headed into the 2020 season after the Southeastern Conference announced its intentions to play a 10-game, league-only schedule because of the coronavirus pandemic.

The Atlantic Coast Conference last week introduced a 10-plus-one scheduling model -- 10 conference games and one nonconference opponent played in the ACC institution's home state -- in an effort to help preserve the traditional cross-conference rivalries like Florida-Florida State, Georgia-Georgia Tech, Clemson-South Carolina and Kentucky-Louisville. But after the SEC effectively killed that plan with its announcement the following day, the ACC revealed its modified slate of games Thursday, which included the absence of the Gators from Florida State's schedule.

Florida State plays in the ACC, while Florida competes in the SEC.

DeSantis on Florida-Florida State rivalry: 'I would like to see a way for that game to happen'

If it were to come to an act of government intervention, it wouldn't be the first time.

After then-Florida head coach and athletic director Bob Woodruff said in 1954 that he wouldn't schedule Florida State "at any time," the threat of legislation and a decree by the Florida Board of Control ultimately led to the game being played for the very first time four years later.

Even still, the first six games were played in Gainesville until Florida State increased capacity at its stadium with the goal of hosting the Gators for the first time in 1964. It has alternated home-and-away every year since.

Typically played as the regular-season finale for both teams on the Saturday after Thanksgiving, that date is no longer available, instead replaced by Virginia on Florida State's modified schedule. The SEC has yet to announce its added games and dates.

"I am going to see if we can make sure that rivalry game continues," DeSantis said near the end of his news conference.

DeSantis, who grew up in Florida and played college baseball at Yale, said he doesn't "have a dog in the fight," but believes it will be "good for the state" if the game is played.

"So we're going to work to see what the options would be for that," DeSantis said.

The four-year contract for the Florida-Florida State game is in place through the 2022 season. The Gators, who currently own a two-game winning streak in the rivalry, were scheduled to travel to Tallahassee this year.

There's always the possibility of a bowl game between the schools, but it's unclear whether Florida would have to make good on its return trip in 2021.