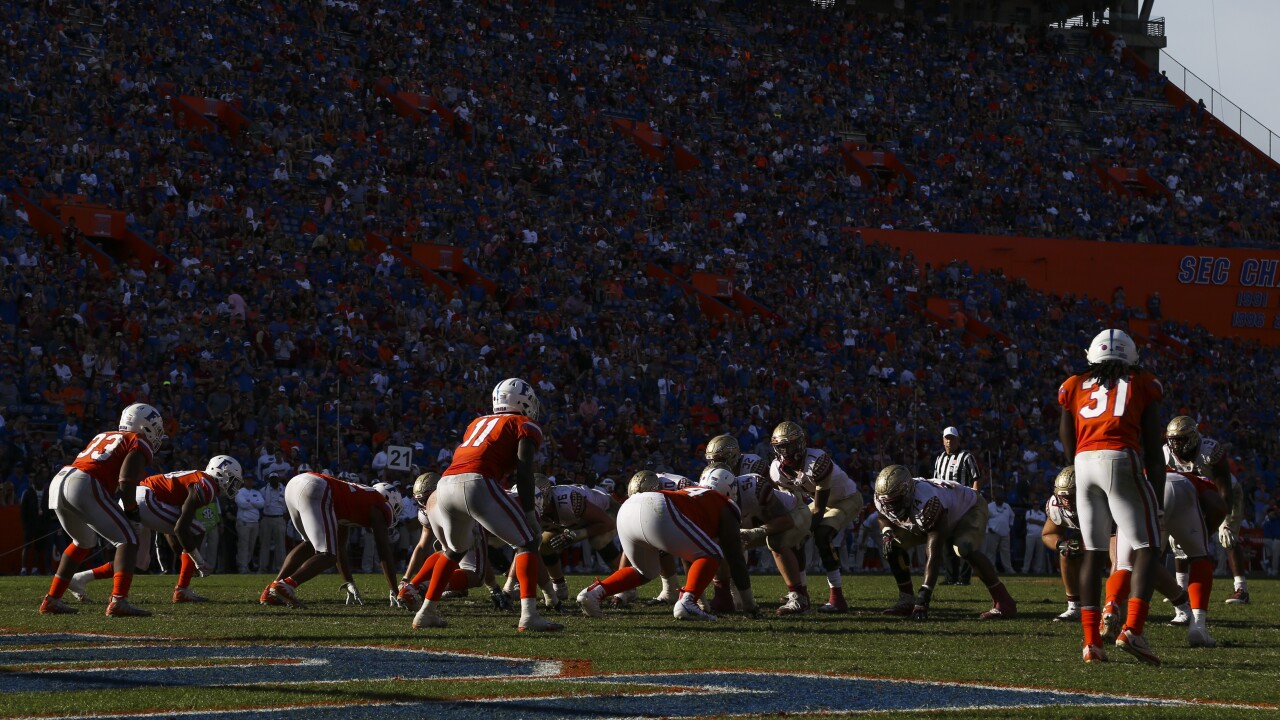 (Copyright 2020 The Associated Press. All rights reserved. This material may not be published, broadcast, rewritten or redistributed.)
Logan Bowles/AP
The Florida Gators and Florida State Seminoles take the field, Saturday, Nov. 25, 2017, in Gainesville,Fla.

WEST PALM BEACH, Fla. — For the first time since the series began in 1958, the annual grudge match between Florida and Florida State won't be played this year.

The in-state football rivalry is the latest casualty of the coronavirus pandemic, which prompted the Southeastern Conference to announce Thursday that it will adopt a 10-game, conference-only schedule during the 2020 season.

There were high hopes for fans of both the Gators and the Seminoles that the rivalry could continue, particularly after the Atlantic Coast Conference announced a day earlier that its schools would play a 10-game conference schedule -- which includes Notre Dame for this season only -- and one nonconference opponent within the same state as the ACC institution.

Florida, of course, is a member of the SEC, while FSU competes in the ACC.

The ACC, in announcing its 10-plus-one model, was clearly trying to preserve the four traditional cross-conference rivalries between its member institutions and their in-state rivals -- Georgia-Georgia Tech, Clemson-South Carolina and Kentucky-Louisville.

Josh Kendall, the South Carolina beat writer for The Athletic, reported that the vote was 13-1 in favor of a conference-only schedule, with South Carolina casting the lone dissenting vote.

"I took the position that we should continue to play our in-state rival, but I support the ultimate decision," Bob Caslen, South Carolina's president, said in a statement after the vote.

The majority of SEC institutions have intraconference rivalries such as Alabama-Auburn and Tennessee-Vanderbilt, so it's not surprising that there weren't a majority of schools in favor of a plus-one model. What was surprising, however, was the lack of support from Florida, Georgia or Kentucky.

Florida's vote in favor of a conference-only schedule came despite plenty of lip service from athletic director Scott Stricklin that every effort was being made to play the Seminoles.

"Wish there could have been a way we could figure that out, but we'll respect the decision we made as a league," Stricklin told ESPN.

Florida State clearly expected to be hosting the Gators in November, going so far as to inform season ticket holders in an email Thursday morning that Florida was anticipated to remain on the schedule.

"We believe these schedule adjustments offer the best opportunity to complete a full season by giving us the ability to adapt to the fluid nature of the virus and the flexibility to adjust schedules as necessary if disruptions occur," SEC Commissioner Greg Sankey said in a statement.

Sankey went on to call the loss of the nonconference rivalries "regrettable" but added that "these are unique, and hopefully temporary, circumstances that call for unconventional measures."

What remains to be seen is what will become of the game in 2021 and beyond. Will Florida make good on its trip to Tallahassee or will the Gators, coming off their first victory in Gainesville in a decade, insist on FSU visiting "The Swamp" next year?

Now that Florida State's season opener against West Virginia and trip to Boise State won't be played, that leaves Football Championship Subdivision team Samford as the lone nonconference opponent left for the Seminoles, unless they can somehow lure another high-profile program to Tallahassee to fill the void.

Could powerful Sunshine State lawmakers intervene to save the rivalry, which is typically played as the final regular-season game for both teams on the Saturday after Thanksgiving? They've done it before, threatening legislation when then-Florida head coach and athletic director Bob Woodruff refused to play FSU in the 1950s.

It didn't have to be this way. There was a time in the early 1990s when it seemed likely FSU was headed to the SEC. After all, that was the conference it had sought for decades to join before rising to prominence under longtime former head coach Bobby Bowden.

That ultimately led to FSU fielding overtures from another southern-rooted conference looking to expand its football profile. Enter the ACC.

Contrary to erroneous narratives often propagated by Florida loyalists, the SEC never formally offered FSU admission, though there was flirtation between both parties. That offer instead went to former ACC school South Carolina, which joined Arkansas as new members in 1992.

Clemson and South Carolina have played every year since 1909.

Georgia Tech, also a one-time member of the SEC, has played Georgia annually since 1925.

Kentucky and Louisville renewed their rivalry on an annual basis in 1994.

The Gators are riding a two-game winning streak against Florida State, their first back-to-back victories in the series since 2009.

Ironically, the last time Florida and Florida State didn't meet on the gridiron was in 1957, when another pandemic was plaguing the globe. According to the Centers for Disease Control and Prevention, the Asian flu was estimated to have killed 1.1 million, including 116,000 in the United States.