Gov. Ron DeSantis to Florida State: 'We want you guys to play' football 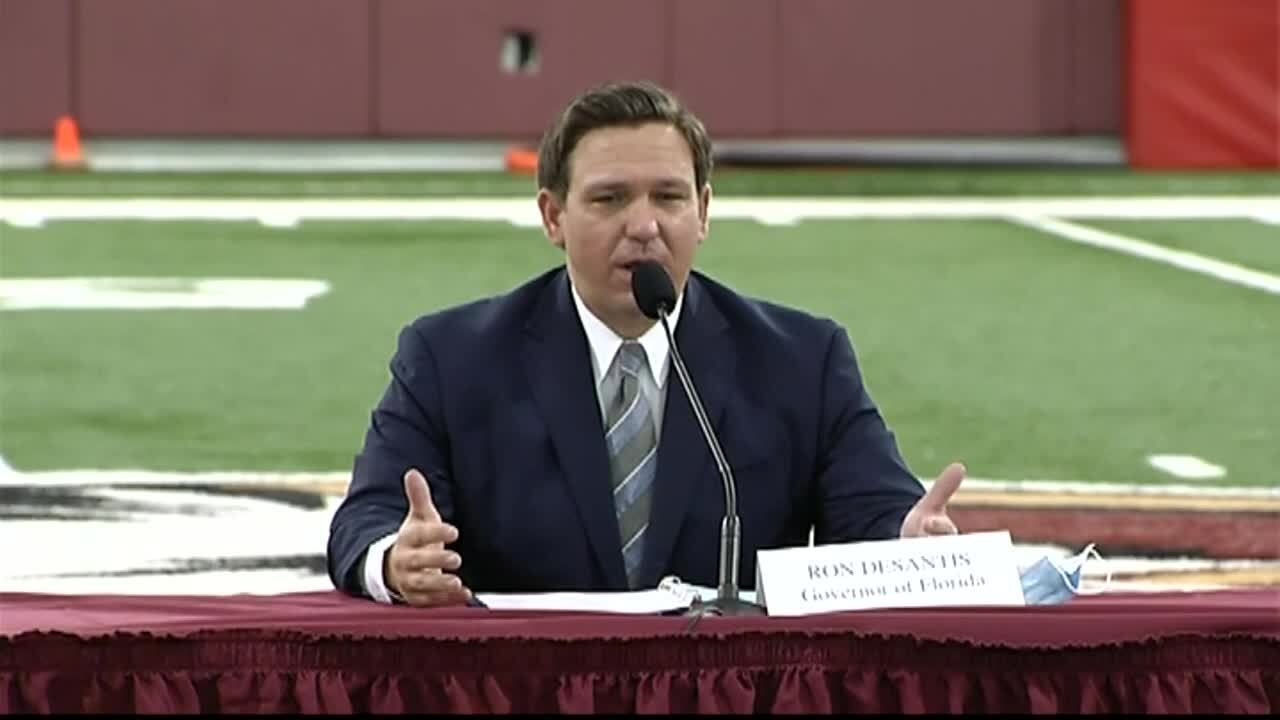 The Florida Channel
Gov. Ron DeSantis talks about the importance of college athletics during a news conference at Florida State University, Aug. 11, 2020, in Tallahassee, Fla.

"We're here to say, from the state of Florida, we want you guys to play," DeSantis said during a news conference at FSU's indoor practice facility.

The Republican governor's message comes on the same day that leaders from the Big Ten and Pacific 12 conferences are deciding whether to cancel or postpone the season until the spring.

Several conferences throughout the country have adjusted their schedules as a result of the coronavirus pandemic, but as talk of putting the brakes on college football altogether has escalated, several high-profile players have been vocal about wanting to forge ahead in 2020.

"The environment that sports provides at a place like Florida State is a safer environment for these kids than what they would have if they didn't have access to this environment," DeSantis said.

A former college baseball player at Yale, DeSantis said he selfishly would like to see football, but it's more about the student-athletes being able to live out their dreams.

"We believe that discussions about short-circuiting the season are entirely misplaced, and I support Florida State continuing with the season, as I do all the sports throughout the state of Florida," DeSantis said.

DeSantis said the coronavirus protocols in place at FSU "are really even above and beyond what I would have even imagined."

Thrasher echoed the governor's sentiments, saying the players want to play and the coaches want to coach.

"We think it's in the best interest of our student-athletes for us to play football," he said.

Thrasher said commissioners from two of the Power 5 conference recently expressed concerns about moving forward because of an NCAA physician's warning about a rare heart condition called myocarditis that could be accelerated by COVID-19.

"I think all these red herrings that are out there that have been talked about, frankly, we've dealt with, we've dealt with for the entire time that we've been getting ready to play football," Thrasher said. "And we've tried to imagine every single circumstance that could happen, and we think we can do it safely."

Coburn said FSU has "had a lot of really good medical advice" from area and national health professionals.

"We're comfortable that we can give this the best shot that can be given," he said.

The Seminoles are preparing for their first season under Norvell, who was hired to replace Willie Taggart, now at Florida Atlantic.

Norvell said he's had two players who have elected to opt out of the 2020 season. He said they will retain their athletic scholarships.

Defensive end Joshua Kaindoh and wide receiver Keyshawn Helton, both of whom suffered season-ending injuries last year, also spoke about what college football means to them and why they want to play.

DeSantis also discussed the fate of the football rivalry between FSU and the University of Florida. The game, which has been played every year since 1958, was nixed after the Southeastern Conference elected to play a 10-game, conference-only schedule.

The governor was noncommittal about taking executive action to force the game to be played.