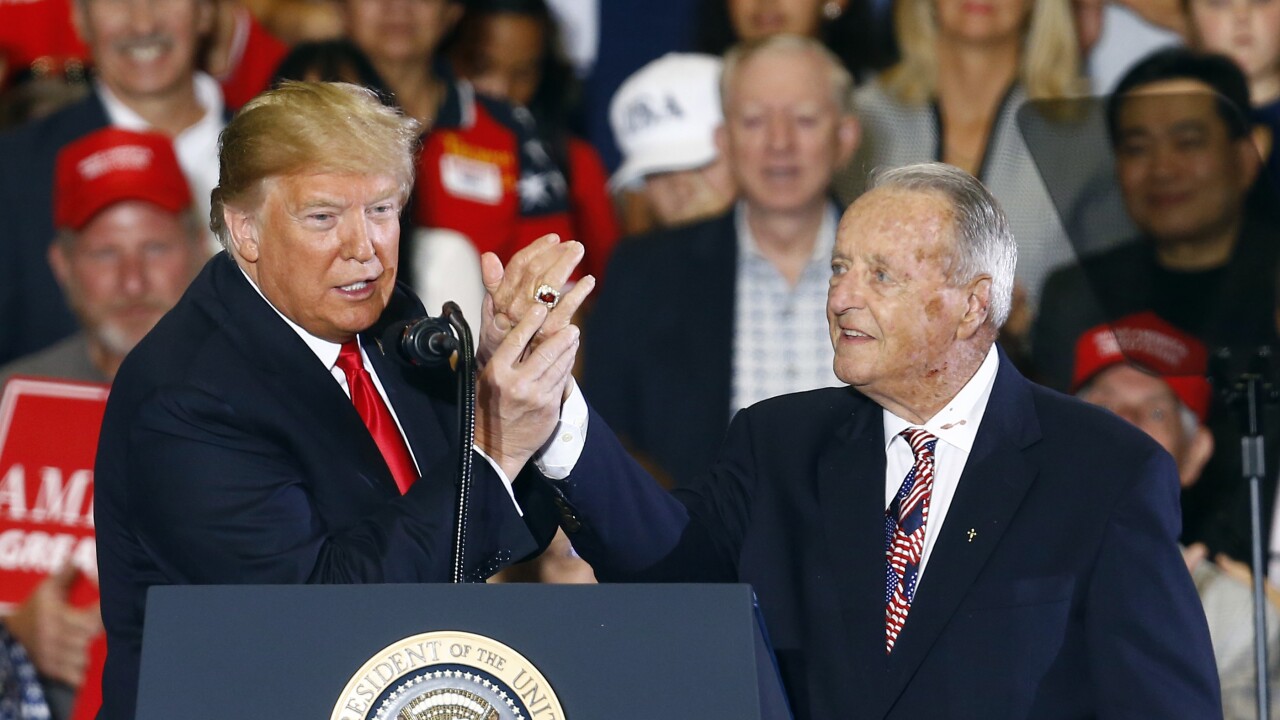 (Copyright 2020 The Associated Press. All rights reserved. This material may not be published, broadcast, rewritten or redistributed.)
Butch Dill/AP
President Donald Trump points to the national championship ring that Bobby Bowden is wearing after he speaks at a rally, Saturday, Nov. 3, 2018, in Pensacola, Fla.

TALLAHASSEE, Fla. — Days after being released from a Tallahassee hospital where he was being treated for the coronavirus, legendary former Florida State football coach Bobby Bowden is praising America as the "greatest country this side of heaven" and announcing his support for President Donald Trump.

Bowden released a nine-paragraph statement Wednesday thanking the "many, many people who were thinking of and praying" for him after he was diagnosed with COVID-19.

"I just went through a battle with COVID-19, and God just wasn't ready to take me home to be with him yet," the 90-year-old retired coach said.

Bowden, who finished second behind the late Joe Paterno for the most wins in major college football history, then spent the remaining seven paragraphs praising Trump and encouraging voters to re-elect him next month.

"I've had the chance to get a lot of wins in my life, but I really wanted to win this one because I wanted to be around to vote for President Trump," Bowden said.

Bowden went on to say that, like Trump, he too was treated for COVID-19 with drugs like Remdesivir. At his age, he said, "in many other countries, I might not have even been treated. In America, I was."

Bowden, who won 304 games with the Seminoles from 1976-2009, said re-electing Trump "is our only chance to leave the next generation with the same heritage, beliefs and opportunities that (wife) Ann and I had and that many of you had."

"There are about 45 of us Bowdens around," Bowden remarked. "Most of us live in Florida, and I promise you that almost all of us will be voting for Trump, and the ones that don't won't be telling me about it. So please, take the time, dadgumit, for the sake of our children and grandchildren, to keep America great and vote for Donald Trump."