'I've got a really weird thing to tell you:' 911 callers surprised by kangaroo sighting in Fort Lauderdale 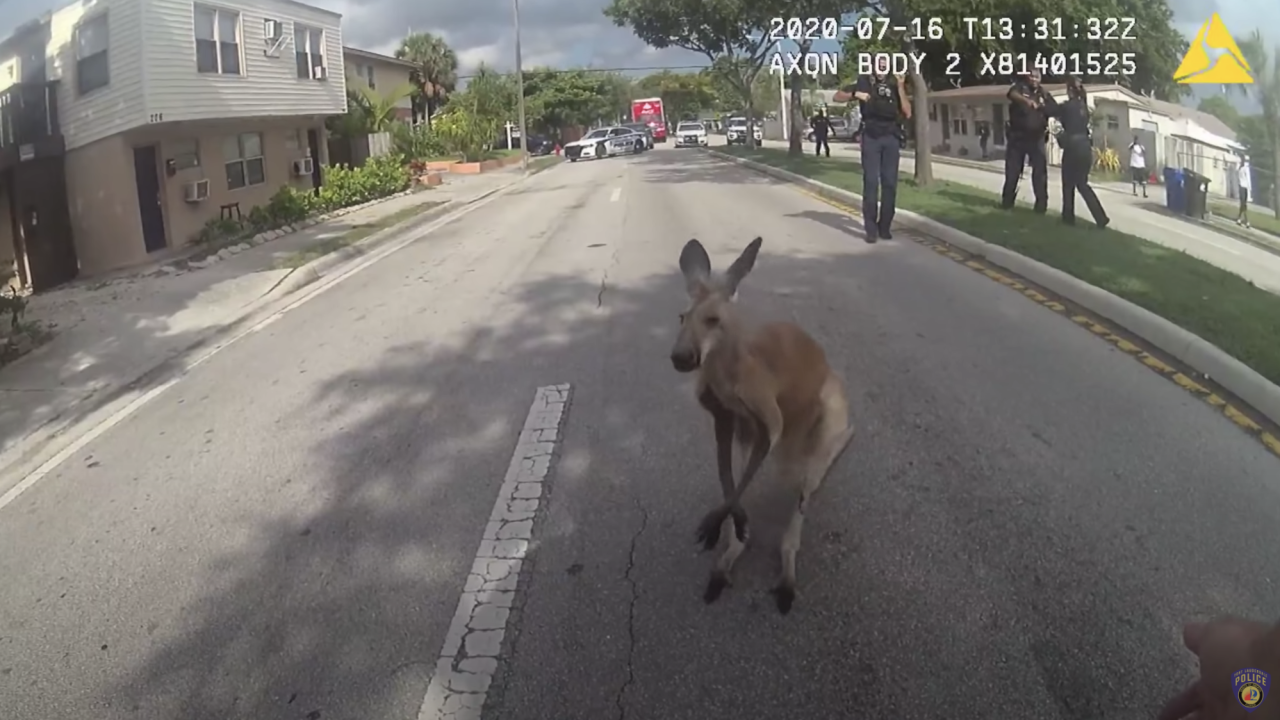 Fort Lauderdale Police Department
This body-camera video shows police officers attempting to corral a kangaroo on the loose in the Fort Lauderdale.

FORT LAUDERDALE, Fla. — "I've got a really weird thing to tell you."

"You're not going to believe me."

Those were just some of the remarks concerned residents told 911 dispatchers after a kangaroo was spotted hopping through a Fort Lauderdale neighborhood Thursday morning.

Fort Lauderdale police released a series of 911 calls Friday, a day after the marsupial was seen hopping along Andrews Avenue between 13th and 16th streets.

The calls highlight just how unusual of an occurrence it is for an escaped kangaroo to be roaming the streets of Fort Lauderdale.

"I've got a really weird thing to tell you," one man tells the 911 dispatcher. "There's a kangaroo jumping around on Andrews and, like, 13th and 16th area off of Wilton Manors-Fort Lauderdale area."

In case she didn't believe him, he repeats himself.

"There's actually a kangaroo that's jumping around on Andrews between 13th and 16th," he says. "Someone must have had it and it got out. I don't know. It was the strangest thing I've ever seen in my life."

When the 911 dispatcher asks more questions, the man tries to convince her he's telling the truth.

"Seriously, I know you probably think I'm crazy," he says.

Then he tells her what most South Floridians already know.

"Kangaroos are not indigenous here, so obviously it got loose," he says.

Another caller relays a similar message.

"There's a live kangaroo running down the street," he says.

"How many kangaroos are there?" the 911 dispatcher asks.

That's essentially what another caller tells another dispatcher.

"There's a kangaroo loose on the street," he says.

By now, the dispatchers should know that the calls aren't bogus.

"Yes, hi, I just wanted to call and let someone know there's a kangaroo hopping around on the street," a woman says.

The dispatcher later asks her the color of the kangaroo.

"A regular kangaroo color, I guess, like, tan," she says.

She expresses her concern that the kangaroo will be struck by a car.

"I think someone was trying to help it, but he kind of hopped away," she says.

The last caller seems to know what he's about to say sounds crazy.

"You're not going to believe me," he says. "You're going to think I'm, like, high on something."

"You're not going to believe me, but there's a kangaroo on the loose," he says.

The dispatcher asks him if he's sure it's a kangaroo he's looking at in a church parking lot.

Police also released body-camera video of the capture, which includes a surprised moment from the officer, who is speaking to someone on the phone while driving to the neighborhood where the kangaroo was roaming.

"I'm trying to catch a kangaroo," he says.

Eventually, he and several other officers surround the animal, which appeared to have an injured front paw.

The officer manages to grab the kangaroo and hold the animal while another officer put a leash around its neck.

"We actually captured the kangaroo," another officer announces, sounding accomplished.

Florida Fish and Wildlife Conservation Commission spokeswoman Carol Lyn Parrish said the 24-year-old owner of the kangaroo, Anthony Macias, was cited with three misdemeanor counts, including having no license to possess the exotic animal and failure to provide records of acquisition of the kangaroo.

Parrish said the kangaroo was placed in the care of a permitted facility until a permanent location can be determined.