Responding officer to boys with BB guns: 'This could've turned out worse' 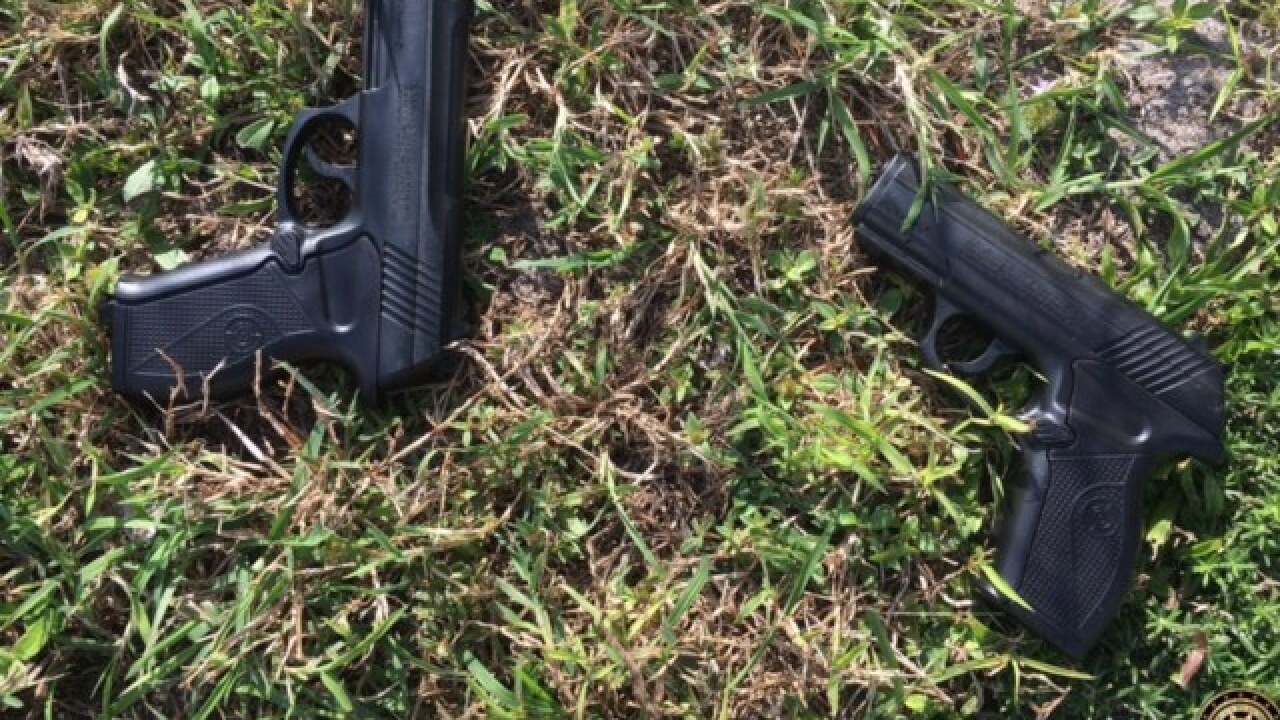 This story had many of our viewers buzzing on Facebook this week.

If that wasn’t bad enough those BB guns looked like the real thing. And officers say that put their lives at risk.

This story could have ended badly but didn’t because of the instinct of the officers who responded to this scene.

One of them was K9 officer Mark Sohn, a 15-year veteran of the department.

"It looked 100% like the real fire arm," he told WPTV's Alanna Quillen in a follow up interview on Tuesday. "It didn't have any orange tips. This could've turned out a lot worse than what it was."

Monday afternoon, Officer Sohn responded to the scene and found two young boys fitting the 911 caller's description -- one wearing a yellow shirt and the other wearing a Spider-Man sweater. The boys were only 10 and 11-years old.

The boys took off from officers but were found trying to hide in the yard of a nearby home. The boys were taken into police custody and questioned.

"You have to take that extra precaution to believe that it's a real firearm, not only for your own life but for the public's life," said Sohn. "Many times we respond to calls and they are never what they seem to be in the first place. So you go in there, like yesterday's call with kids, maybe it's a BB gun but there's a chance that it might be a real firearm as well."

Officer Sohn is thankful he and his colleagues made the right decision.

"As police officers we are trained to encounter certain situations and we're not here to take chances. If we believe it to be a real fire arm going to act accordingly," said Sohn.

Not every situation is as fortunate.

"Especially nowadays, there are unprovoked attacks on law enforcement so you never know what you were getting into," he said. "Around the country today there are a lot of officer involved shootings both with realistic and fake fire arms. I don't think it's anything any officer wants to do, it's kind of a last resort."

Just across the street from where Sohn found the two boys, a daycare full of children.

"Glad no body got hurt walking by or driving by or anyone would have taken matters into their own hands," said Linda Martinez, a daycare worker at Tiny Tikes Academy.

Martinez says she teaches her kids that guns -- even toy guns -- are no laughing matter.

"Guns are just plain not toys. It's not a funny issue. It's not anything anyone should play around with," she said.

Officer Sohn says parents need to teach their kids that safety is the number one priority when dealing with any kind of firearm, even toy guns that look real.

"They are meant to be used under the supervision of parents ages 16 and under. Obviously were dealing with 10 and 11-year-olds," he said.

We couldn't get a hold of either boys parents, but Officer Sohn made it clear to the boys that they got away lucky they were not hurt.

"I gave them a pep talk. I think they were a little naive to believe that it could've ended worse," he said. "Mom was pretty supportive of the point we were trying to make to them, which was -- that it's not safe and they shouldn't be skipping school to partake in criminal activity like this."

Because no driver came forward to press charges of any damage, Boynton Beach police released the boys back to their mothers. Police also spoke with Wal-mart officials, who are not pressing theft charges because no one witnessed the boys steal the BB guns.