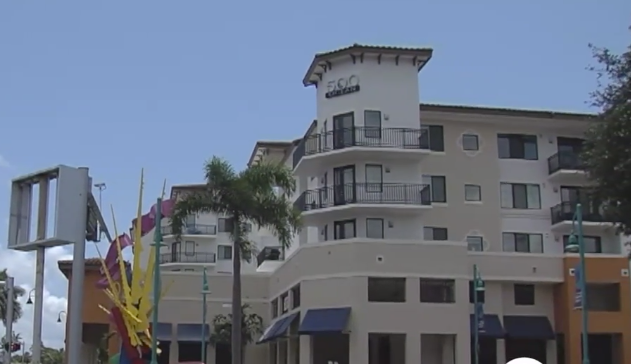 Some residents at the 500 Ocean apartment complex in Boynton Beach claim mold is taking over in their homes and in some cases making them feel ill.

BOYNTON BEACH, Fla. — Some residents at the 500 Ocean apartment complex in Boynton Beach claim mold is taking over in their homes and in some cases making them feel ill.

“My concern is my hair has been falling out for the last four weeks,” says Tracy Fearn who moved in last fall.

Fearn showed results of an independent test on her apartment that indicated mold on clothes, furniture and picture frames. Plus she says other tenants have been now contacting her over social media with similar complaints.

"My son would notice symptoms, sniffly and start to cough, irritated but when we would leave the apartment it would clear up,” says Bennett Augustoni who moved out of his apartment at 500 Ocean weeks ago.

Boynton Beach City Commissioner Christina Romelus says she’s aware of the testing confirming mold and says the city has reached out to the developer, LeCesse Development.

"I would hope as a main piece of our downtown they would be amenable to working with us to fix this problem,” says Romelus.

LeCesse Development was unable to comment at the time this story was originally published. However, the company later released this statement from Thomas Hayden the director of development.

“It has been recently reported that there have been incidents of mold growth found on clothing and personal items at the 500 Ocean Apartments in Boynton Beach, Fla. While we share in residents’ concerns that mold may be present, based on preliminary reports from an environmental testing agency we believe these are isolated instances due primarily to the actions or lifestyles of the residents rather than the physical condition or performance of the building.

Prior to the reporting by the media, the property management company had sought to alleviate the resident’s concerns, which included offering to move the resident to another unit within the community. Several meetings were held, and no solution had been reached.

To continue to be proactive, management moved forward with the testing of the HVAC system in the unit and also tested work on the air quality and possible sources of water intrusion, which could result in the growth of mold. The results of both tests indicate that 1) the HVAC system is operating properly and 2) there is no water intrusion to the unit through the building envelope.

The results further indicate that the mold present on clothing, soft goods, etc. is the result of moisture entering the units through open doors or windows and not properly running the HVAC system to reduce the moisture levels in the air within the unit. During the inspection, there was no mold observed on building elements, only on personal items.

Currently, building codes require that new construction eliminate any outside air from entering a residential unit, which makes it particularly important for residents to operate their HVAC system to recirculate air and reduce the moisture levels in their apartment. This is a requirement of the lease, which residents execute prior to occupancy.

During the construction of 500 Ocean, the owners took an additional step of engaging an expert water management company as part of the construction team to ensure the building was constructed to minimize the opportunity for water intrusion. This was not required, but the owners recognized the importance of water tight construction in tropical climates such as South Florida.

It has also been implied through reporting that the mold identified in the unit was a community wide problem. We strongly disagree, but as we wish to fully alleviate resident concerns we have taken the extraordinary step of having a significant number of units independently tested for air quality. Additionally, our management team will reach out to all of the residents at 500 Ocean and conduct an air quality test on their unit upon their request.

We are confident that the results of those tests will serve as a teaching tool for everyone living in a newly constructed building in a tropical climate about the importance of properly operating the HVAC system, and the unfortunate results for those who elect to allow outdoor air into their apartment (with its accompanying humidity) but fail to recognize the potential consequences.”