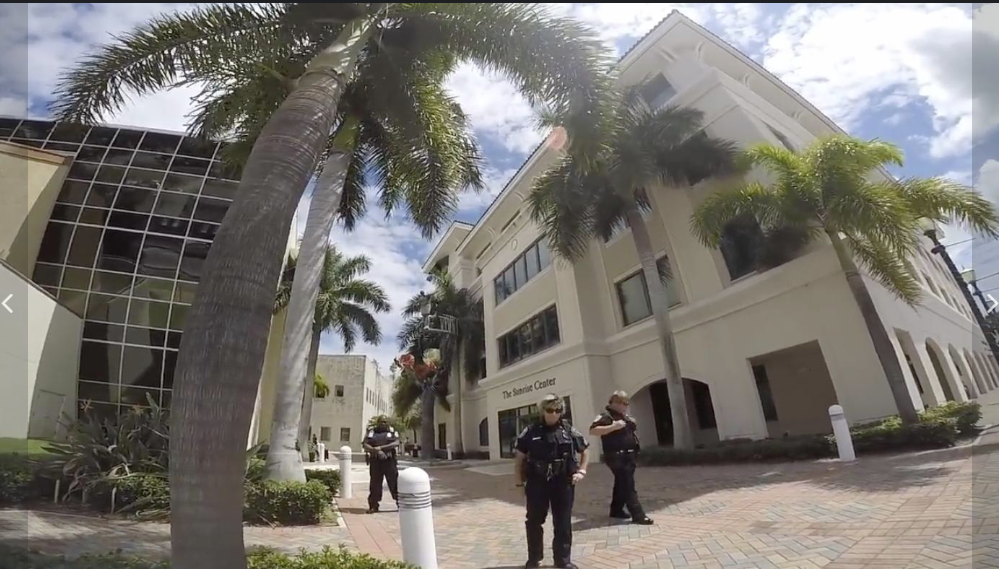 A Florida man is putting freedom of speech to the test. Jeff Gray, who conducts civil rights investigations under his organization HonorYourOath, tested how two local governments would react to him protesting outside their city hall. STUART, Fla. — A Florida man is putting freedom of speech to the test.

Jeff Gray, who conducts civil rights investigations under his organization HonorYourOath, tested how two local governments would react to him protesting outside their city hall.

Attorney Barbara Kibbey-Wagner gave WPTV her insight into whether Gray went too far with his actions, or was acting within his constitutional rights.

Between the City of Stuart and the City of Fort Pierce, Gray received two very different reactions to the same sign.

In one YouTube video, Gray explained he stood outside the City of Fort Pierce City Hall with a sign that said F*** City Hall for about 30 minutes.

Afterward, he tucked the sign away by a bush, then went into city hall to make a public records request.

Then, he leaves that office to view a public bulletin board.

That is when two Fort Pierce Police Officers approach Gray.

“Do you have some ID?” the officer asked.

"May I see it please?” the officer asked.

"Am I being detained?” Gray asked.

Gray does not provide his ID but gives his first name and his organization.

Kibbey-Wagner said he legally did not have to give his ID.

“There was not a crime occurring, he was looking at a bulletin board,” Kibbey-Wagner said.

Police ask him what he is doing there, and after several minutes of questioning, ask him to leave the building.

"Right now, the city is asking that you leave…” the officer said, "because apparently your sign which is providing vulgar messages.”

"I don’t know why she’s requesting him to leave, he’s not doing anything wrong,” Kibbey-Wagner said.

“I'm enforcing my right to be critical of the government,” Gray said.

“It doesn’t give you the right to use profanity,” the officer says.

Kibbey-Wagner says the officer was wrong. “He is 100% allowed to do that,” she explained, referring to the use of profanity.

Then, Gray asks what will happen if he doesn’t leave the building.

"You’re going to be arrested,” the officer said, prompting Gray to agree to leave, while police follow him out of the building.

“The police, unfortunately, did not handle it right… I don’t think they lawfully trespassed him,” Kibbey-Wagner said. "I think this was a huge teaching moment for Fort Pierce law enforcement.”

Gray asks the officers when he can return without being arrested.

The officer says he can return, “when he can not offend people.”

Kibbey-Wagner says people have a right to protest the government, even with signs that contain profanity, so long as they do not incite violence, make threats or do anything obscene.

Gray held the same profane sign outside the City of Stuart.

“Stuart, I was very pleased with… they handled it beautifully,” Kibbey-Wagner said.

City leaders including the City Manager and City Attorney approached him outside and tried to appease him.

“I’m just exercising my right to be critical,” Gray said.

“I don’t have a problem with that,” said City Manager David Dyess. “I just want to see if there’s something we can do to correct that,” Dyess said.

“Thanks for asking, that’s cool,” Gray said. “I’m just exercising my right to be critical of government.”

“You are absolutely welcome to do that,” Dyess said. A Stuart Police Officer also asks Gray about his sign but tells Gray he has the right to protest.

The City of Stuart gave the following statement and explanation to WPTV:

“The City recognizes the rights of all individuals in expressing themselves freely in public forums. While the comments expressed in this case were clearly of a vulgar and provocative nature, they did not elicit or otherwise invoke a riot or violence. It’s important to remember that the first amendment provides for the right of peaceable assembly. Although language choices by some individuals may be considered disturbing or provocative to others, the protection of inalienable Constitutional rights serves a higher public purpose than a momentary reprieve from an offensive message. It is the duty of every public servant to protect Constitutional law and the rights of every person, just as it is critical that the peace and safety of all be maintained. In this circumstance, once city officials determined there was no verifiable threat to peace, the individual in question was thanked for their cooperation and left to their own devices.”

The City of Fort Pierce and the Fort Pierce Police Department have not responded to requests for comment.