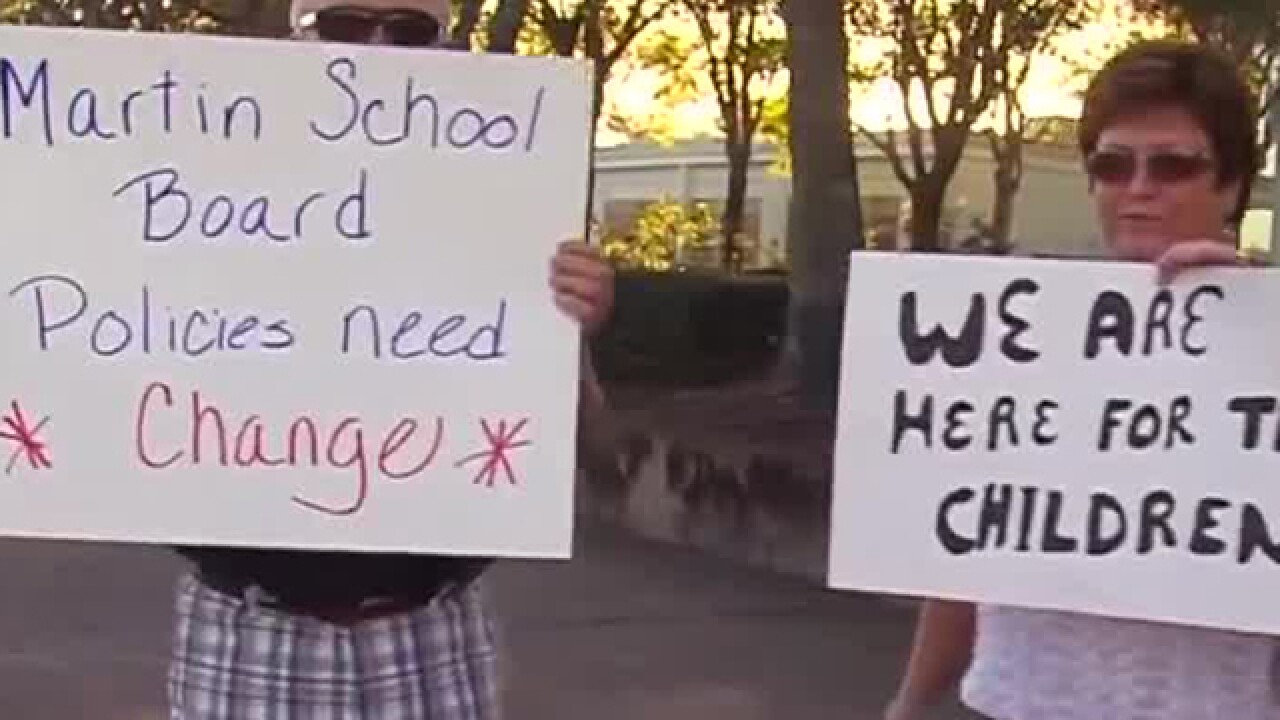 Erica Tucker said the Martin County schools superintendent reached out to her Monday and would like to schedule a meeting to discuss the issue.

Tucker said she looks forward to having the conversation.

“We can bring awareness,” she said. “Let the school board know we see an issue where maybe it was under the radar and we didn't realize it. And together, we can come together and work with each other to resolve these issues and help reform some policies.”

Some Martin County parents and community members are preparing to protest the Martin County School District, claiming a disciplinary board is imposing “excessive” punishments.

Now, they want the district to take a second look at the school’s discipline policies.

It centers around four 8th grade students at Stuart Middle School who were given 10 days suspension and transferred to Spectrum, an alternate school in the district.

The students were first-time disciplinary offenders and honor students.

Erica Tucker says her daughter was one of the children given the punishment.

Her daughter, Ruby, explained one of her friends brought an unusual item to the lunch table in late November.

“One of my friends pulled out a travel-size, unmarked, clear spray bottle with clear liquid in it. I didn’t assume there was alcohol in there,” said Ruby.

But, there was alcohol inside.

Ruby explained her friend passed it to another girl at the table. Eventually, she says the spray bottle got to her and someone told her to spray it in her mouth.

“This is obviously my big mistake.  I took it, and I sprayed it in my mouth,” Ruby said.

She said the taste made her run to the water fountain and spit out the alcohol. At that point, she wasn’t quite sure what she had put in her mouth.

The next day, she says her friend was not at school, and she was called to the office.

That’s when Ruby found out what she consumed, and learned she would be facing punishment.

“Of course I was upset with what happened,” Erica Tucker said.

Tucker said she punished Ruby at home for carelessly consuming something unknown.

But Tucker says the punishment being imposed by the district is going too far.

Ruby was suspended for 10 days and will have to finish the rest of her 8th grade year at Spectrum.

“I feel that is for children who are repeat offenders and have been in trouble multiple times. I really was shocked,” Erica Tucker said.

However, district leaders tell WPTV they were simply following policies in place related to alcohol.

Alcohol does not fall under the school’s zero tolerance policy, and Tucker believes the punishment should not be "one size fits all."

Tucker is concerned she was not given a chance to appeal her daughter’s discipline, saying she could not appeal to the disciplinary board because her daughter was not being expelled.

She also says she has not been able to view a video where her daughter is allegedly seen running to the water fountain.

She also believes there should be a sliding scale for the punishment given depending on the severity of the infraction.

“She was mandated the same punishment as the person who decided to bring alcohol into school,” Tucker said.

Now, Ruby and the other students punished will not graduate with their 8th grade class.

Ruby hopes she will still be well prepared for high school.