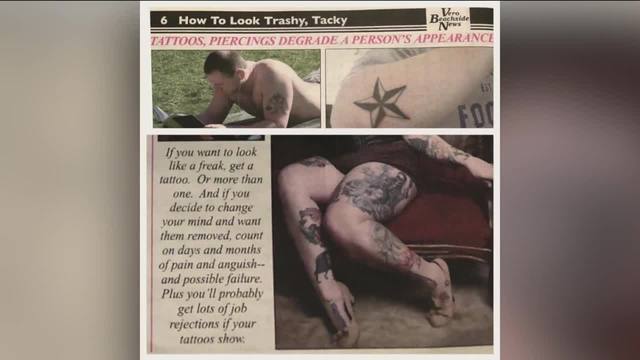 Hundreds of people have shared an image of a page in a local news publication, with a message many people with tattoos are upset about. 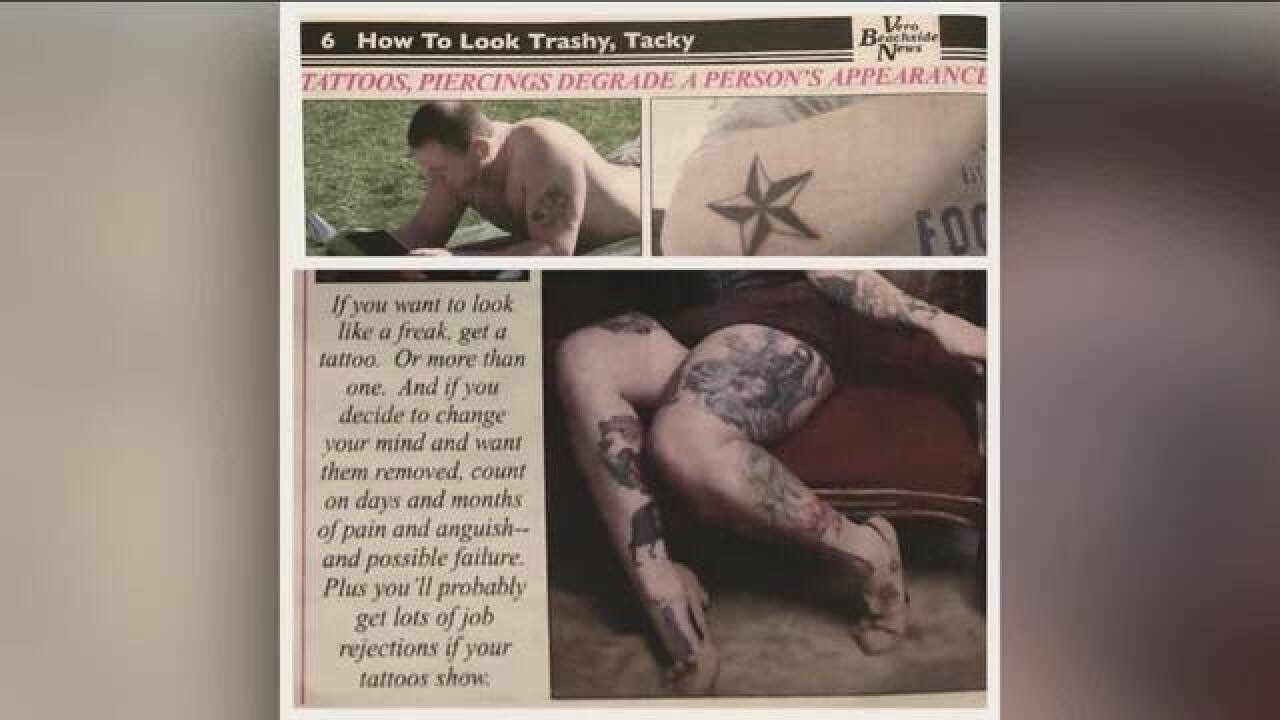 Hundreds of people have shared an image of a page in a local news publication, with a message many people with tattoos are upset about.

The piece calls people with tattoos "trashy" and "freaks," saying:

"If you want to look like a freak, get a tattoo. Or more than one. And if you decide to change your mind and want them removed, count on days and months of pain and anguish- -- and possible failure. Plus you'll probably get lots of job rejections if your tattoos show."

Some were surprised to see that message in a different form of permanent ink, and want answers from the publication as to why it was published.

Dozens of people rallied outside the Vero beach office Thursday as a result of the piece.

“How you could you publish something like that, call them freaks because they have a tattoo?” Said veteran, Terry Fagan.

He has multiple tattoos representing his time in the military and honoring people who died.

He also has a tattoo that was needed in case he was killed.

“So if you lose your head, arms, legs, How else are you going to be identified? So, on the sides of our torso we have tattooed our social security number and blood type,” Fagan said.

Local mom and business owner, Lindsey Cook, said her tattoos represent her family. An anchor represents her dad who passed away. Another represents her son. “My son’s name is Oakley. He is the wind in my sail. He’s what keeps me going,” Cook said.

The write up has also been seen by tattoo artists around the area, including Nick Coffinas at Timeless Tattoo Company in Port St. Lucie.

He’s seen people from all walks of life.

“I’d expect an apology to the community, number one,” Fagan said. “I would love an apology,” Cook said.

The tattoo article was in response to many severe medical issues with Treasure Coast teens and adults trying to remove their unwanted tattoos—resulting in major infections and scarring.   The article was meant to discourage self-mutilation.

The Mayo Clinic provides the following advice for tattoo removal.

Overview
Tattoo removal is a procedure done to try to remove an unwanted tattoo. Common techniques used for tattoo removal include laser surgery, surgical removal and dermabrasion.
Tattoo ink is placed beneath the top layer of the skin. That makes tattoo removal more complicated — and expensive — than the original tattoo application.

If you're interested in tattoo removal, consult a skin doctor (dermatologist) about the options. Don't attempt tattoo removal on your own. Do-it-yourself tattoo removal creams and other home treatments aren't likely to be effective and can cause skin irritation or other reactions.

Why it's done
You might consider tattoo removal if you regret a tattoo or you're unhappy with the appearance of your tattoo. Perhaps the tattoo has faded or blurred, or you decide that the tattoo doesn't fit your current image.
Tattoo removal might also be important if you develop an allergic reaction to the tattoo or other complications, such as an infection.

Risks
Scarring is likely after most types of tattoo removal. Infection or skin discoloration is possible as well.

How you prepare
If you're considering tattoo removal, consult a dermatologist. He or she can explain the options for tattoo removal and help you choose the method that's most likely to be effective for your tattoo.
For example, some tattoo inks are more responsive to laser treatment than are others. Likewise, small tattoos might be good candidates for surgical removal, while others are simply too large to remove with a scalpel.

What you can expect
Tattoo removal is often done as an outpatient procedure with local anesthesia. Common techniques for tattoo removal include laser surgery, surgical removal and dermabrasion.

Laser surgery
Q-switched lasers — which release energy in a single, powerful pulse — are often the treatment of choice for tattoo removal. A special type of laser — called a Q-switched Nd:YAG — might be used on darker skin to avoid changing the skin's pigment permanently.
Before laser treatment, the skin is numbed with an injection of a local anesthetic. Then a powerful pulse of energy is applied to the tattoo to heat and shatter the tattoo ink. Multicolored tattoos might need treatment with various lasers and different wavelengths.
After the procedure, you might notice swelling and possibly blistering or bleeding. Antibacterial ointment can help promote healing. You'll likely need repeated sessions to lighten the tattoo, and it might not be possible to completely erase the tattoo.

Surgical removal
During surgical removal, the skin is numbed with an injection of a local anesthetic. The tattoo is removed with a scalpel, and the edges of skin are stitched back together. After the procedure, antibacterial ointment helps promote healing.
Surgical tattoo removal is effective — but it leaves a scar and might be practical only for small tattoos.

Dermabrasion
During dermabrasion, the tattooed area is typically chilled until numb. Then the tattooed skin is sanded down to deeper levels with a high-speed rotary device that has an abrasive wheel or brush. This allows the tattoo ink to leach out of the skin.
The affected area feels sore and raw for several days after the procedure. Recovery can take up to two to three weeks. Due to unpredictable results and less effective outcomes than laser or a combination of laser and excision, dermabrasion isn't a common choice.

Results
Tattoos are meant to be permanent, and complete tattoo removal is difficult. Some degree of scarring or skin color variation is likely to remain, regardless of the specific method of tattoo removal.