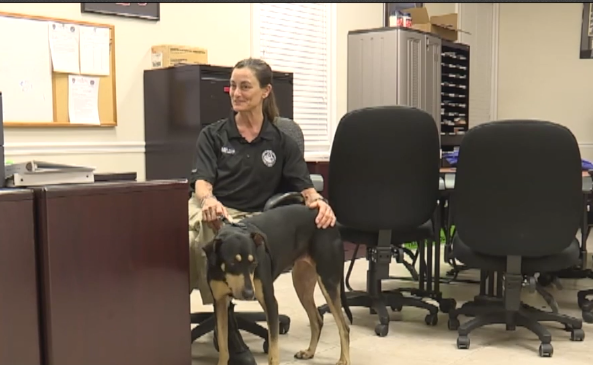 There is a new kind of rescue effort for some first responders in Indian River Shores. Police and fire crews are not only helping people in need. They’re now helping find loving homes for animals.

INDIAN RIVER SHORES, Fla. — There is a new kind of rescue effort for some first responders in Indian River Shores.

Police and fire crews are not only helping people in need. They’re now helping find loving homes for animals.

First responders hope to serve as a temporary home for more animals which could benefit from the exposure they get at the station.

They take them to community events.

Right now, the station has two dogs: Bella and Maddie.

Bella is settling in well, according to Firefighter Paramedic, Gayle Nye.

“She has her spot upstairs by the TV, close to the kitchen table and that’s where she’s going to stay,” Nye laughed.

So on every shift, officers and firefighters have a new greeter and companion, and so does anyone from the public who stops by for help.

“It’s proven that even if a dog is around and people are allowed to pet it, it reduces anxiety and blood pressure,” Nye said.

Maddie is already winning over the heart of one firefighter.

“One of the guys in the station has shown some interest in taking her home,” Nye said.

And after being hosts to Bella for a few weeks, more firefighters and police have become attached to her, too.

So, she’s now going to be a permanent fixture at the station.

With two dogs spoken for, the station is now prepared to welcome another dog to help find a home for in the near future.

Nye says they could take in another dog within the next 30 days.