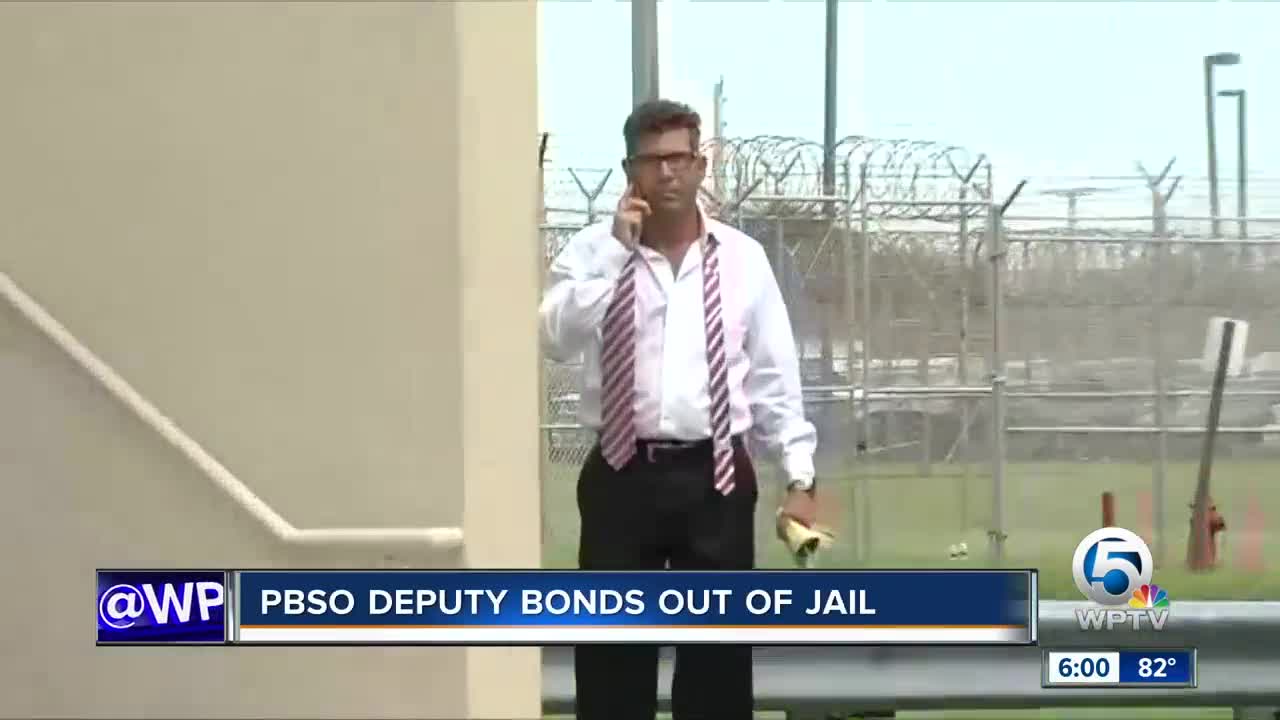 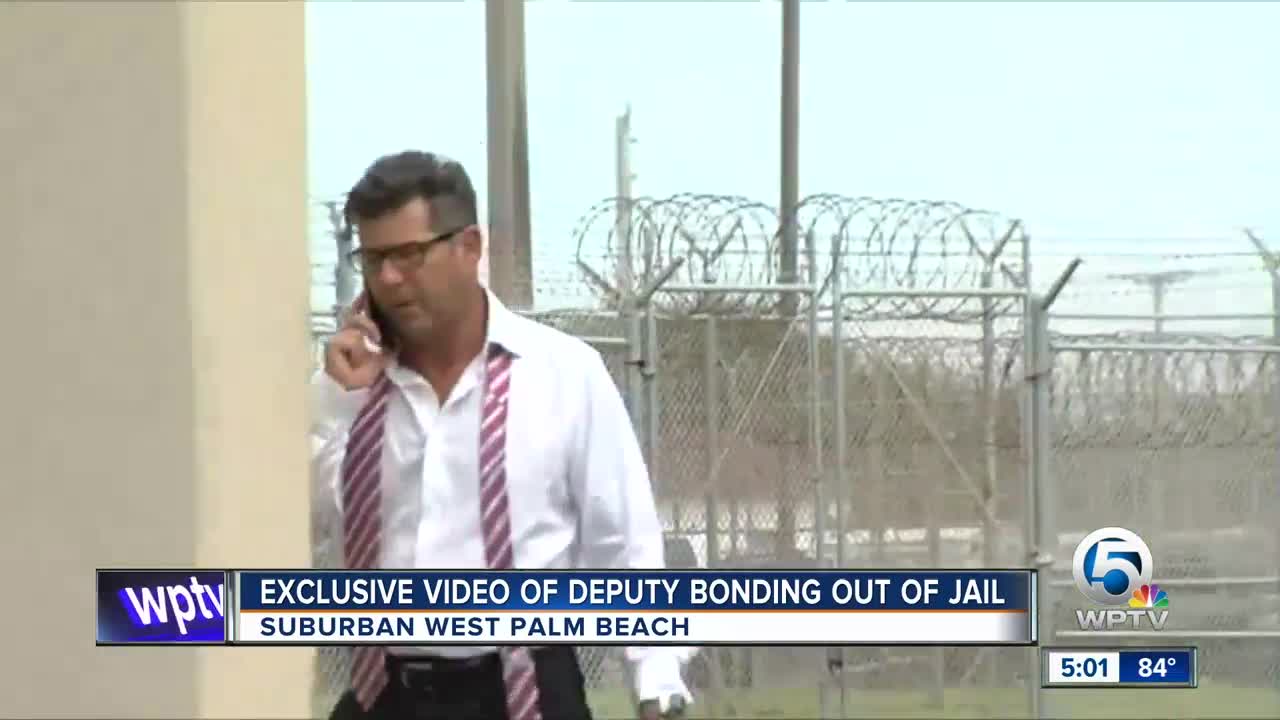 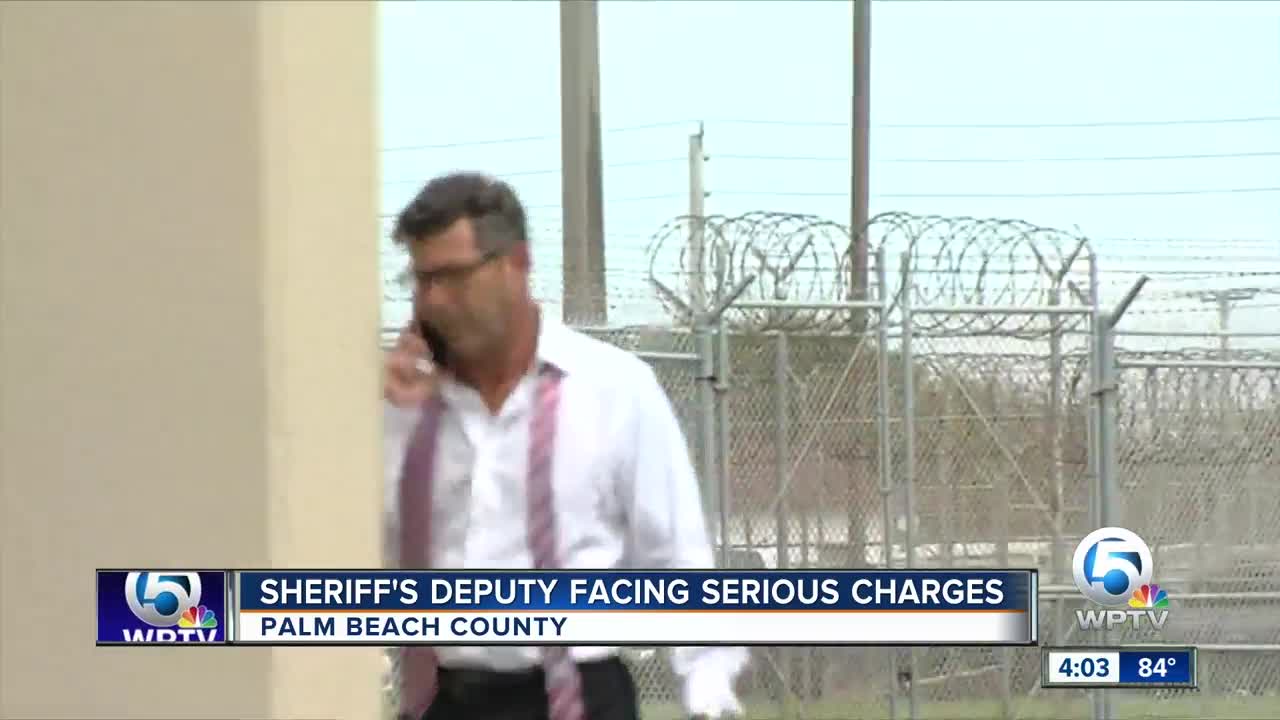 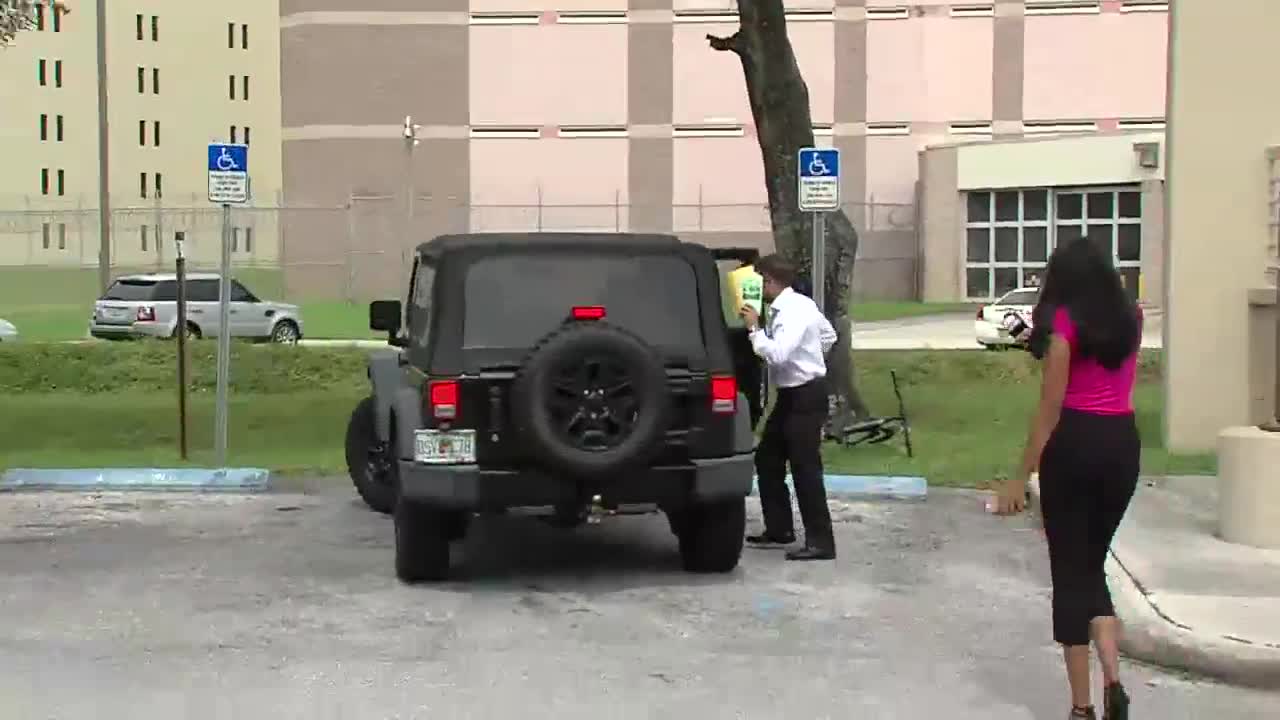 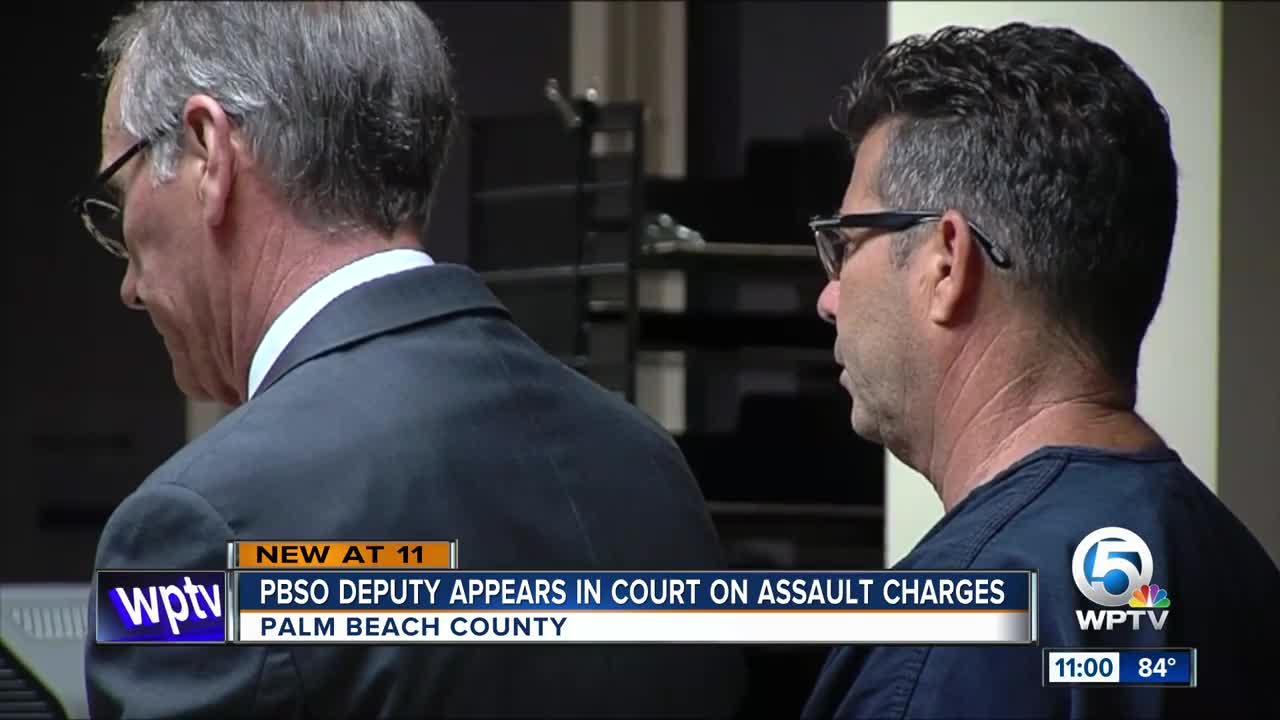 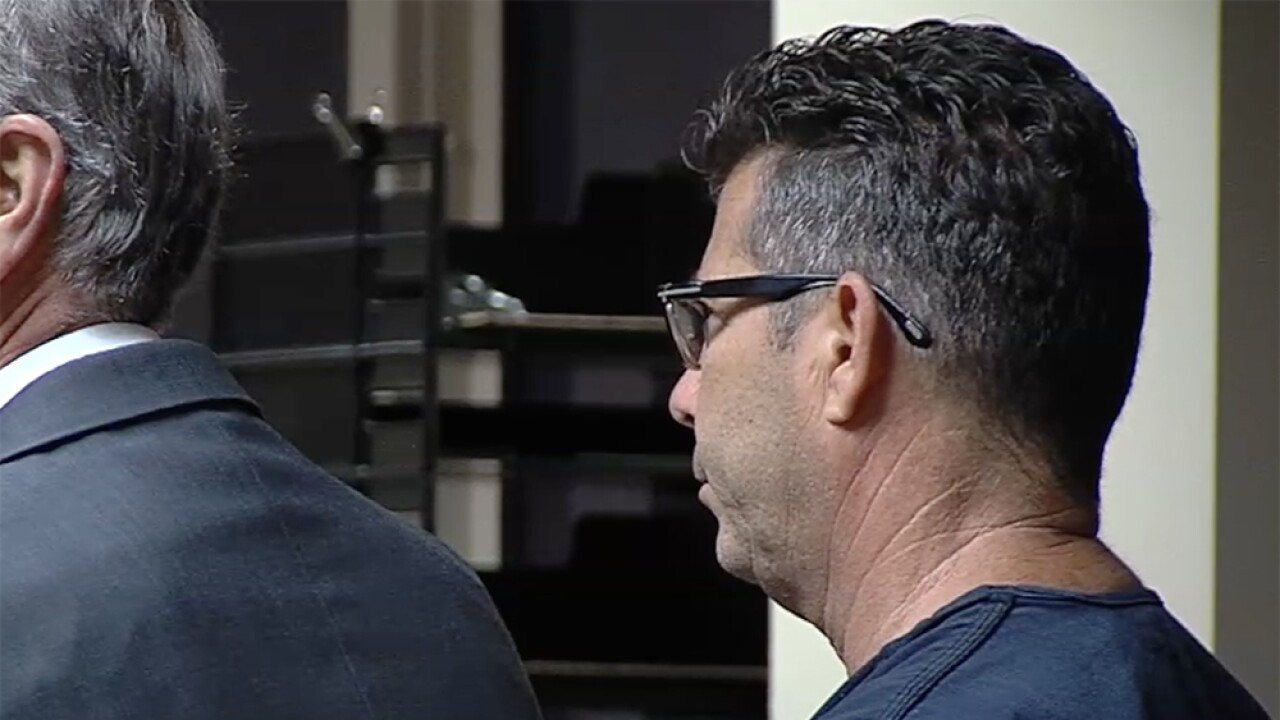 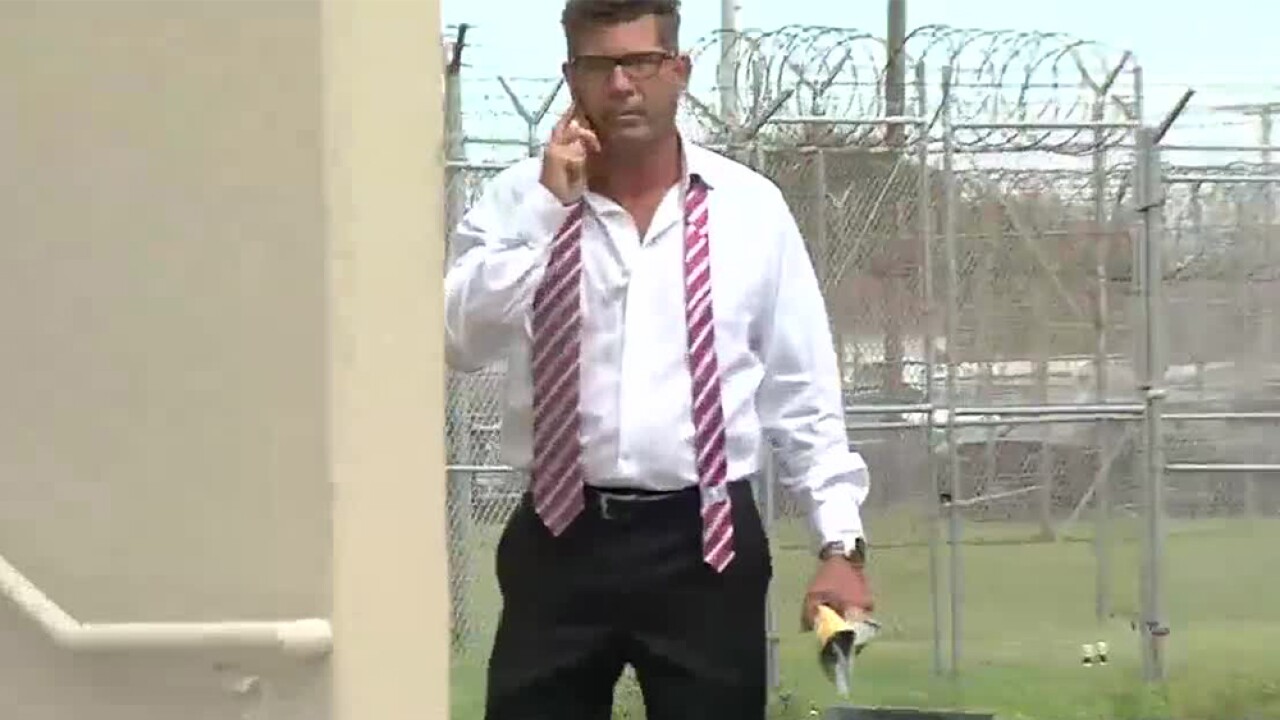 WPTV was the only station at the Palm Beach County Jail as Jerald Alderman refused to answer any questions about the allegations he's facing.

Alderman covered his face and got into the passenger seat of a black Jeep and drove away.

Cell phone video showed Alderman, who was off-duty at the time, holding a gun and yelling profanities at a group of men in a car early on the morning of Oct. 12, telling them to leave a parking lot in the 300 block of Banyan Blvd.

West Palm Beach police said Alderman was under the influence of alcohol at the time.

According to his arrest report, Alderman approached the victims' vehicle and displayed his PBSO badge.

"I could smell liquor on his breath," one of the victims said, according to the arrest report. "He was definitely intoxicated, he was drunk, and I never seen a police officer so drunk."

Alderman claimed the victims had hit his Porsche, the arrest report stated.

According to one of the victims, Alderman "definitely pointed his finger at all three of us and said I'll [EXPLETIVE] kill you and then he took his gun out."

The victims said Alderman banged his gun against the vehicle three times while pointing it at them.

According to the arrest report, once police arrived on scene, Alderman told them the victims "had been breaking into vehicles in the area, which was different from him accusing them of hitting his Porsche in the parking lot."

Police said when they spoke to Alderman at the scene, they "immediately smelled the strong odor of alcoholic beverage" on him, and "the smell became stronger as time lapsed."

Alderman was arrested for aggravated assault with a firearm and using a firearm while under the influence of alcohol.

A judge set bond at $40,000 for Alderman on Friday morning and ordered him to have no contact with the alleged victims and not possess any weapons. He also must undergo random drug and alcohol testing.

According to FDLE records, Alderman has been a law enforcement officer in Florida since 2002. He started his career at the Royal Palm Beach Police Department, and moved to PBSO when the sheriff's department took over Royal Palm Beach in 2006.

Alderman is currently on administrative leave with pay, according to a PBSO spokesperson. The agency also released this statement:

"The Palm Beach County Sheriff’s Office holds its employees to the highest standards and never forgets about its duty to preserve the public’s trust. Unfortunately sometimes an employee makes a bad decision which leads to misconduct. This misconduct was reported, investigated and subsequently determined to be criminal in nature, resulting in his arrest. The Sheriff’s Office will remain vigilant to insure that our efforts are professional and meet the high standards that the public has come to expect."

WPTV reached out to Alderman's wife, who said she had no comment.

#BREAKING Judge orders #PBSO deputy Jerald Alderman a $40,000 bond for 3 counts of aggravated assault with a weapon and 1 count of using a weapon while intoxicated. Judge ruled $10,000 for each count. pic.twitter.com/yQMc8FCM30