President Trump defends against impeachment during rally in Broward County 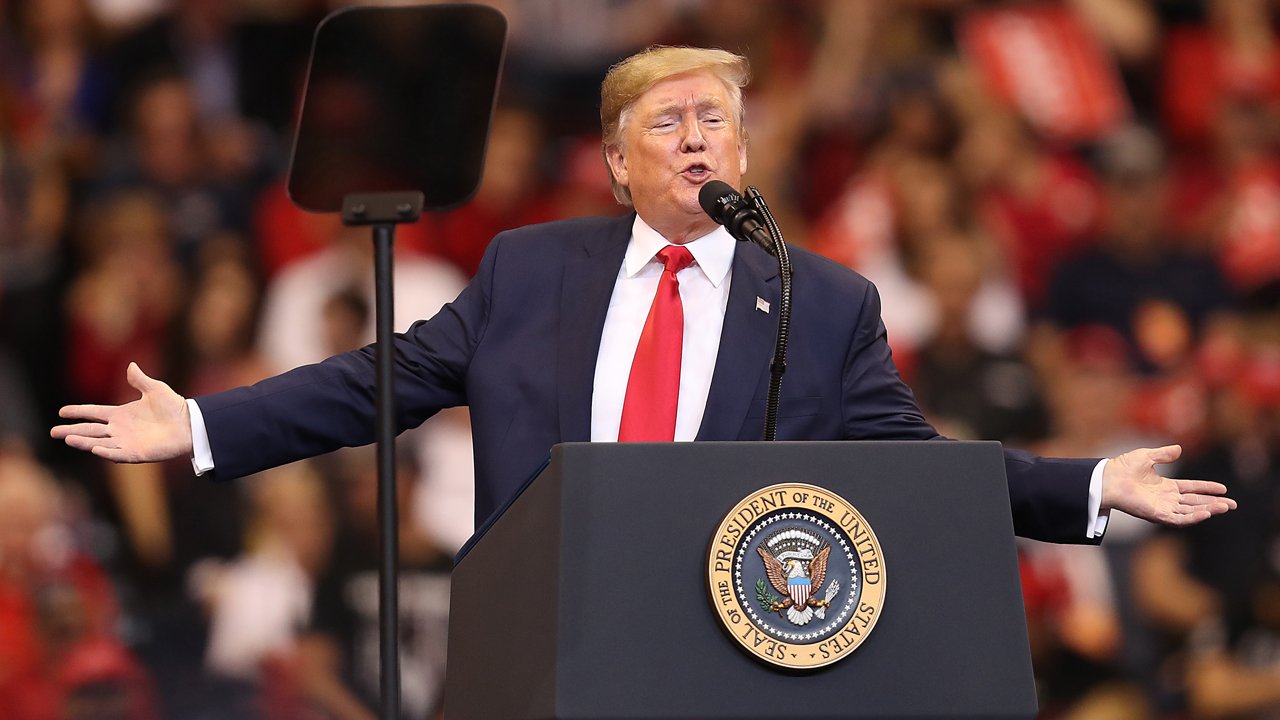 President Donald Trump returned to Florida Tuesday for what his campaign dubbed a "homecoming rally," promising the crowd that "less than one year from now I will join voters across the Sunshine State, my home, as we head to the polls." 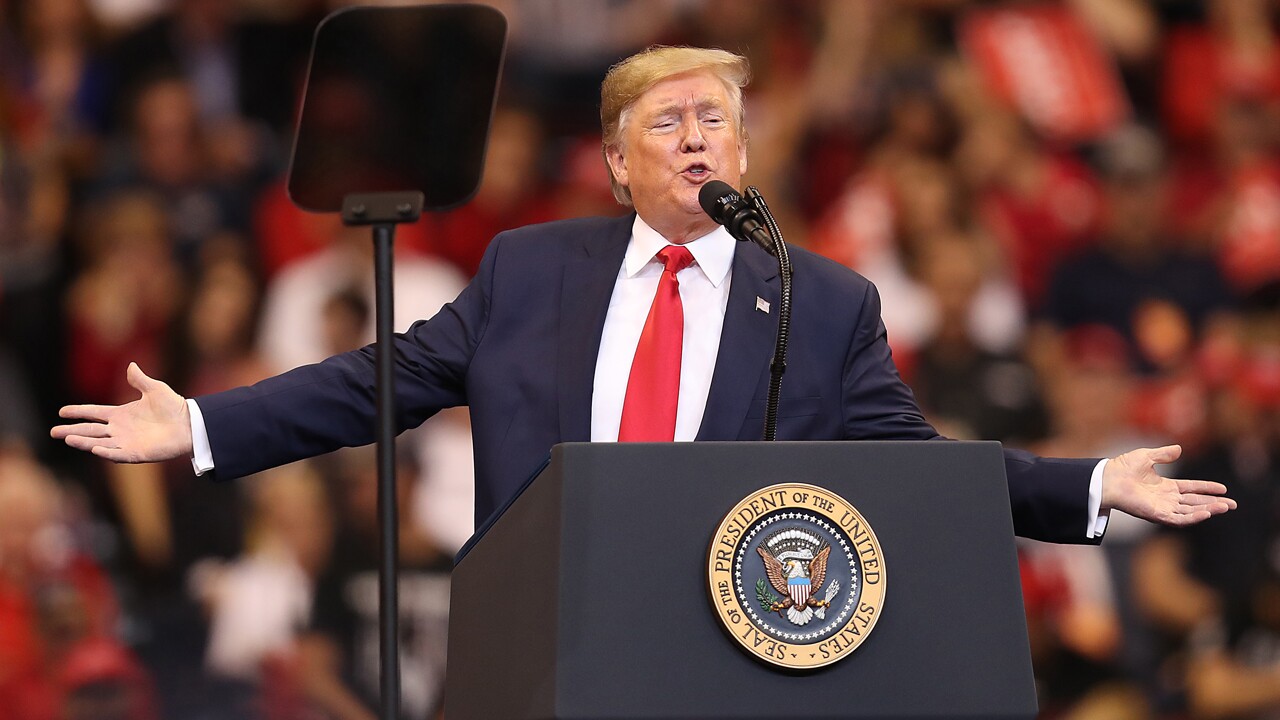 SUNRISE, Fla. (AP) — Prompting a profane chant. Describing his own speeches as “ranting and raving.” Advising the governor of Florida to not always wear a jacket so people know he’s not fat.

Now a Florida man, President Donald Trump held what his campaign dubbed a “homecoming rally” near Miami Tuesday, continuing to lash out at the ongoing impeachment inquiry in a state that will be crucial to his 2020 reelection bid.

The rally was Trump’s first in the state since he officially changed his residency last month from Trump Tower in New York to his Mar-a-Lago club in Palm Beach. He received a warm welcome from the roaring crowd at an arena in Sunrise.

The House impeachment inquiry is entering its next phase after lawmakers last week completed their first round of public interviews concerning Trump’s efforts to pressure Ukraine to investigate his political rivals. The House Intelligence Committee is now preparing a report on its findings, while the House Judiciary Committee is moving forward with its own hearings before it is expected to consider formal articles of impeachment.

Trump spent much of his rally railing against Democrats, accusing them of “trying to rip our nation apart” with investigations.

“First it was the Russia hoax,” Trump said, “and now the same maniacs are pushing the deranged ... impeachment” narrative. He insisted yet again that he had done nothing wrong in his dealings with Ukraine and argued anew that Democrats are only trying to take him down because “they know that they cannot win the next election.”

Still, Trump insisted that voters aren’t being persuaded — despite polling to the contrary — and tried to assure his audience that "we won these last two weeks so solidly,” despite damning public testimony and unflattering press reports.

“You see what’s happening in the polls? Everybody said, ‘That’s really bulls---,’” Trump said, prompting a chant of the profanity to erupt from the crowd.

At the same time, Trump worked to butter up voters as he described his supporters as the “super elite.”

"You people are successful as hell,” he told them. “You’re smarter. You’re better looking. You’re sharper.”

Despite lingering questions about the visit, Trump assured the crowd that if he “didn't feel great,” he “wouldn't be ranting and raving" to crowds so large.

He also complimented the state’s governor, at one point commenting on his physique and suggesting he wear jackets less frequently.

Florida will be a crucial state for Trump as he tries to replicate his 2016 victory. He carried it by less than 2 percentage points then, defying expectations and paving the way to an electoral college victory.

“Less than one year from now I will join voters across the Sunshine State, my home, as we head to the polls,” Trump told the crowd, predicting rosily that, “together, we will win back the House, we will hold the Senate and we will keep that beautiful, beautiful White House.”

Throughout his presidency, Trump has spent many winter weekends and holidays in Florida, mingling with dues-paying members at Mar-a-Lago and golfing at the courses he owns nearby. Ethics experts have raised alarms at the arrangement, in which wealthy Americans and foreigners can quite literally buy access to the president of the United States.

Trump decided last month to officially change his residency to Florida after long claiming he’d been mistreated by New York officials investigating his conduct and railing against the state’s management, including its high tax rate.

But not everyone was happy about his return.

About 200 anti-Trump protesters rallied on a street outside the BB&T Center before the president arrived, raising a helium-filled “Baby Trump” balloon as some chanted, “Lock him up.”

Because of the president's visit for Thanksgiving, road closures around Mar-a-Lago on Palm Beach are in effect through Sunday.

All forms of travel, including pedestrian travel, are prohibited on South Ocean Boulevard from the intersection of South County Road to Southern Boulevard. The travel restrictions will also extend eastward to the ocean.

CHANGES IN TRAFFIC PATTERNS BEGINNING TUESDAY, NOVEMBER 26, 2019 NO LATER THAN 5AM: Expect traffic delays and road closures in this area thru Sunday, December 1, 2019. Motorists are encouraged to seek alternate routes. https://t.co/uaeNEt5THY

The president recently announced he and First Lady Melania Trump are changing their residency from New York to Palm Beach, Florida.

According to a "declaration of domicile" filed in Palm Beach County court in September, Mar-a-Lago is now President Trump's "predominant and principal home." The document lists his former address as Trump Tower in New York, and his "other places of abode" as the White House and the Trump National Golf Club in Bedminster, New Jersey.