2 dead; deputy-involved shooting shuts down I-95 in Lantana much of Wednesday 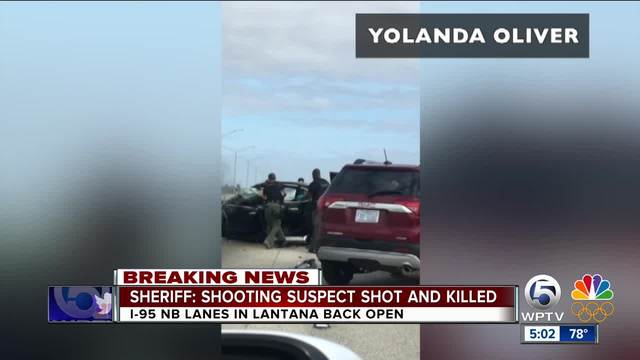 A Palm Beach County Sheriff's deputy shot a man accused of driving the wrong way on I-95 after that man shot and killed a woman around 9:30 a.m. Wednesday in the 1600 block of S. Dixie Hwy. in Lake Worth and put her in a Black Nissan Rogue, according to Sheriff Ric Bradshaw. 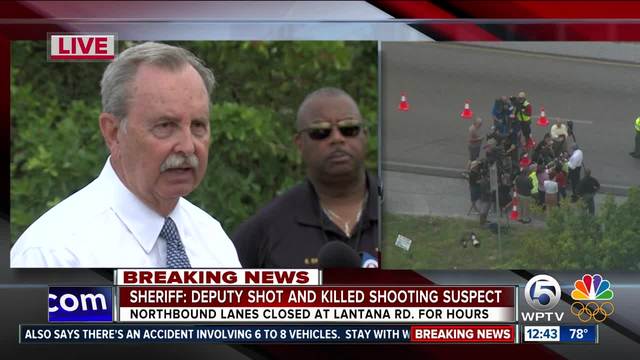 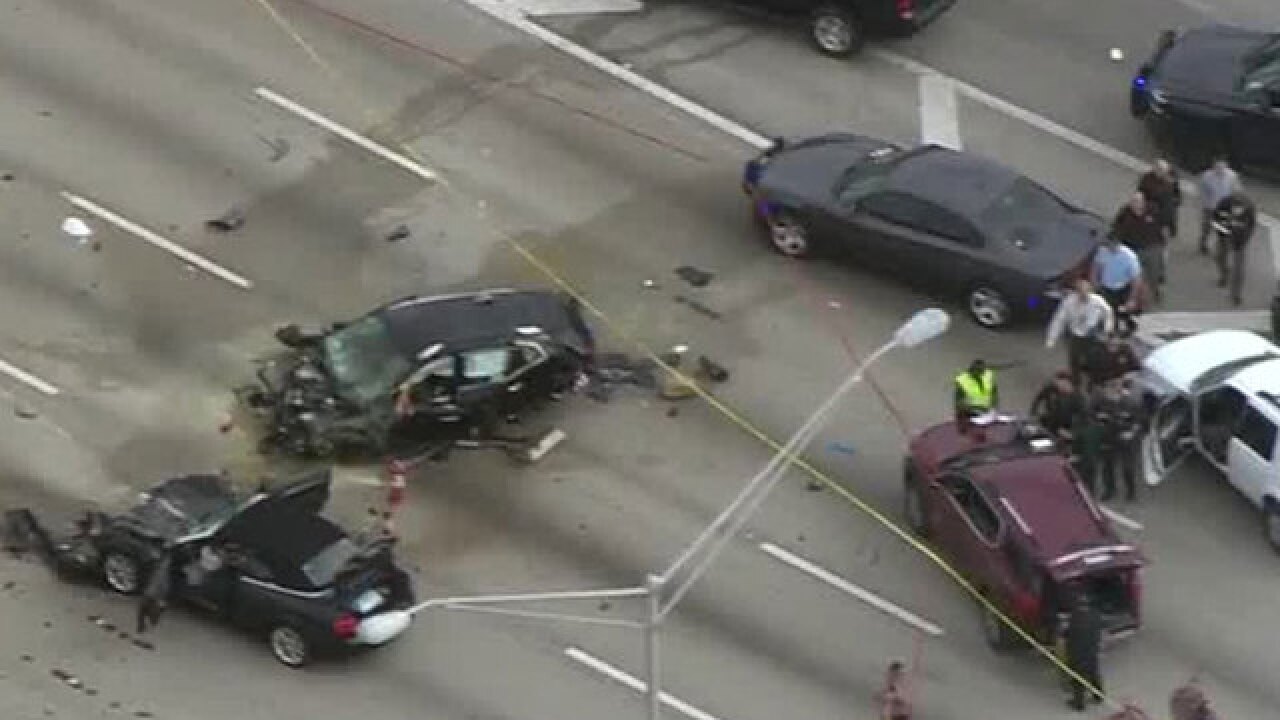 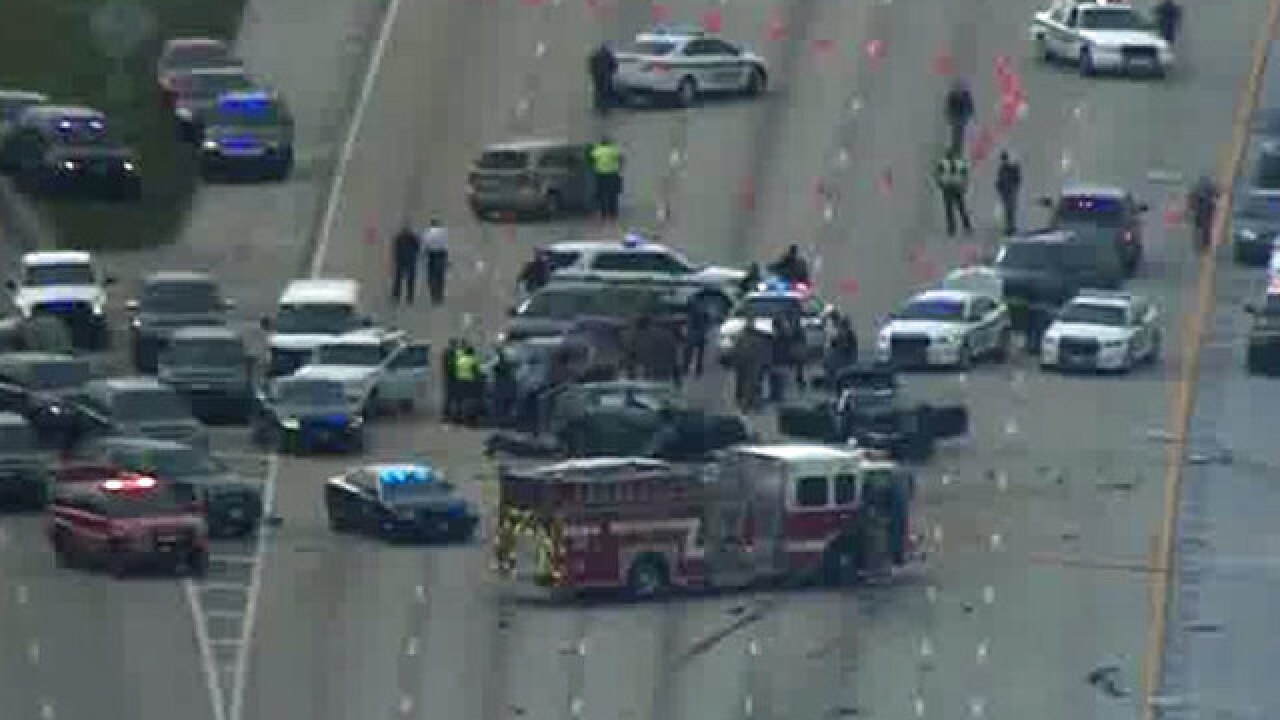 A Palm Beach County Sheriff's deputy shot a man accused of driving the wrong way on I-95 after that man shot and killed a woman around 9:30 a.m. Wednesday in the 1600 block of S. Dixie Hwy. in Lake Worth and put her in a Black Nissan Rogue, according to Sheriff Ric Bradshaw.

The deputy and a Florida Highway Patrol trooper confronted the suspect 15 minutes later just after he caused the last of 3 separate wrecks on the interstate near Lantana Road, the sheriff said.

His SUV became disabled after the last crash and began to catch fire, investigators said.

The trooper tried to use a Taser on the suspect, described as a white male, but it didn't work. That's when the deputy, fearing for his life, shot and killed the man, according to the sheriff.

The woman who was shot is described as a white female. Neither she nor the man who is accused of shooting her has been named.

Investigators said the suspect was also involved in a shooting Tuesday in West Palm Beach in the 7200 block of South Dixie Hwy. A man was shot but he's expected to be OK. West Palm Beach police think the gunman and victim knew each other.

The other drivers involved in the wrecks on I-95 received non-life threatening injuries.

Interstate 95 was closed to traffic northbound from Gateway Blvd. to 6th Ave. South most of the day. The interstate reopened around 5:20 p.m.

Southbound traffic was initially closed from Lantana to Hypoluxo, but lanes later reopened.

#UPDATE This is the gun the suspect used in the homicide shooting of the female earlier this morning, 1600 Block of S. Dixie Highway, Lake Worth. pic.twitter.com/eN62ykFK1r

Officials say the shooting in Lantana is not connected to an earlier shooting in Boca Raton.

From the Palm Beach Co. School District: The School District Transportation Department has deployed buses to schools early for afternoon pick up to help mitigate any delays due to the shutdown on 95. However, because of increased traffic congestion on surface streets, parents should be advised that students may have slight delays getting to their bus stops at their regular times.

@PBCountySheriff confirms scene at 1600 South Dixie Highway in Lake Worth is connected to deputy-involved shooting on I-95 near Lantana Road. @WPTVpic.twitter.com/zEqHMFjbcZ

Traffic backed up on Lantana Road near I-95 northbound entrance ramp. @WPTVpic.twitter.com/iosZ9kwOSa

Washington Ave and South Dixie Highway in Lake Worth is gridlocked. Avoid the area if you can @WPTV@wptvtraffic@FOX29WFLXpic.twitter.com/7CFQHv9rfS