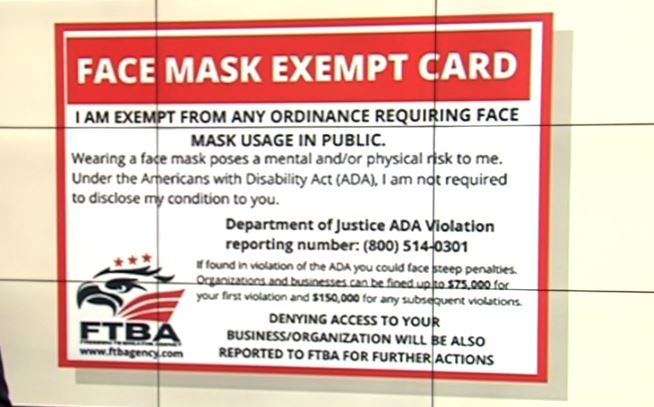 At Don Victorios market in West Palm Beach, signs are posted on the door letting people know they are required to wear a mask before entering.

WEST PALM BEACH, Fla. — At Don Victorio's Market in West Palm Beach, signs are posted on the door letting people know they are required to wear a mask before entering.

"It's very hard because there (are) a lot of customers (who say) that it's a lie, that it's not true. But we know that it's true," owner Gladys Del Carpio said.

Last month, Palm Beach County commissioners voted unanimously to require everyone to wear facial coverings in buildings, including grocery stores and restaurants. A number of people told the commissioners that day the ordinance would infringe on their rights.

Palm Beach County State Attorney Dave Aronberg said Friday people are going to great lengths to defy the ordinance. He said they're even using fake cards stating they're exempt from having to wear masks to oppose the statute.

"So you have this organization out there that was established recently to allow people to evade mask order around the country," he said. "It's pretty despicable."

Aronberg said to get the card doesn't require a doctor's notice. He said people are downloading them from a group called the Freedom to Breathe Agency. Aronberg said the group was using the U.S. Department of Justice's seal to evade masks orders around the country. He said individual rights don't trump the county's right to enforce a mask ordinance.

"The county has the right to enact a mandatory mask order," he said. "The state has the same rights. They can do so in their police power."

Del Carpio feels to wear a mask in her store is nothing more than a little inconvenience.

"We ask everybody to respect because I want to be open," she said.