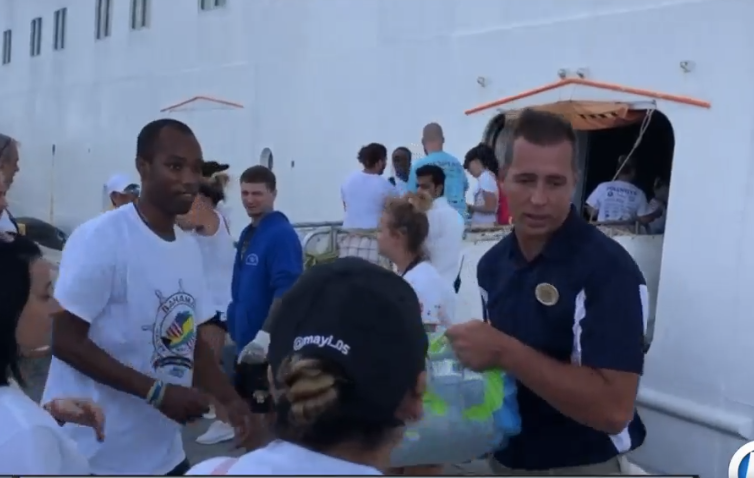 The northern Bahamas continues to recover after Hurricane Dorian

Since the storm, Bahamas Paradise Cruise Line had transformed into a humanitarian ship, spending the last three weeks bringing volunteers and aid to their main port on Grand Bahama.

READ: Hundreds of volunteers making a difference in the Bahamas

Now, the cruise line is shifting its focus toward a new effort called ‘voluntourism’.

CEO Oneil Khosa said they’re revving their engines this week to revive the economic engine in the Bahamas.

“To get back up and running, getting cruising and getting tourism back to an island that just saw devastation of this magnitude is remarkable," he said.

The Grand Celebration ship will depart this Friday evening from the Port of Palm Beach for two-day trips to Grand Bahama.

“I think the best that could have happened, we are doing,” he said.

They’re resuming the weekly commercial sailings at a steep discount where people can book a trip on the ship with a choice of being a tourist, a volunteer or both.

“We believe the growth, the recovery and the sustenance of the island is hugely dependent on our cruise ship and cruise passengers," said Khosa.

Volunteers will continue the same efforts in distributing food and supplies.

“We are still receiving tremendous aid in our warehouse and we’ll continue to ship that which is critical for the island. They need supplies," said Khosa.

The volunteer aspect is a continuation of the volunteer effort launched by the non-profit Bahamas Relief Cruise.

“It’s been unbelievable, the community got together, loaded things, got aid and donated their time. It’s overwhelming,” said Khosa. “I’ve never seen anything like this. People leaving their jobs, work, and business and jumping on a ship to help people they’ve never seen. It’s very remarkable.”

The group sprang into action and rounded up hundreds of volunteers to make two mission trips delivering supplies, food, water, medicine, doctors and construction crews for immediate post-storm needs on Grand Bahama. The group partnered with the Grand Celebration ship to make those missions a reality.

“We took people at no cost. And they want to come back and continue helping. So we are devising a strategy for them so they can continue to go and help island of Grand Bahama,” said Khosa.

Fares will start at $109 per person with 50 percent off for a second traveler in the room. The fares apply for both tourists and volunteers.

“As much as we want to help the volunteers get there and help Grand Bahama we also don’t want to shortchange our regular passengers. So we have lowered the overall prices so that everyone can benefit from them, whether you are cruising or are a volunteer,” said Khosa.

Tourists can choose to stay on the boat or be taken to the south part of Grand Bahama, the least affected by the hurricane.

For example, the Grand Lucaya Resort was used to safely house evacuees from Grand Bahama and Abaco islands immediately after the storm.

”It still has pristine beaches and a pristine environment, so they will not be affected,” said Khosa.

“So we’re going an extra mile to make sure the shore excursions and activities on the ground are totally controlled and people have a good time,” he said.

Economic expert Tom Essaye with Sevens Report Research said this type of ‘voluntourism’ might be what it takes to make a difference in the Bahamas.

“Anything we can do now to help get them started is important,” he said. “We’ve got to break the idea that, ‘Hey I’m just not going to the Bahamas for a year or two.’ Because if everyone says that, it’s just going to make things worse. One thing that hasn’t changed in the Bahamas is the beautiful water, the friendly people and the fantastic weather. That’s still there and it will be there long after they’ve recovered.”

He said almost half of the country’s workforce is in tourism.

“Official statistics say that the Bahamas generates 40 percent of GDP from tourism but it’s actually much higher than that. Seventy percent of government revenue comes from tourism-related taxes,” he said. “If you don’t have people visiting, if you don’t have the cruise ships coming in, the planes coming in, if you don’t have people working in the hotels, driving the taxis, working at the beach resorts — there’s not really anything else for them to do because there isn’t really any other sustainable industry especially in the northern Bahamas.”

This format with Bahamas Paradise will continue for the time being as restoration continues on the northern islands.

“Whatever you’re doing by getting on this ship is helping the Bahamas,” said Khosa.

Bahamas Paradise Cruise line has a plan for its second ship, the Grand Classica, which will begin a new route to Nassau starting on October 12.

Meantime, a Bahamas benefit is being organized on behalf of Bahamas Relief Cruise of West Palm Beach.

The fundraiser is September 28 from 7:30 p.m. to 12 a.m. at Subculture Coffee on Clematis Street with donation based cover. All of the proceeds will go toward the volunteer mission trips. Click here for details.