Hundreds of volunteers making a difference in the Bahamas 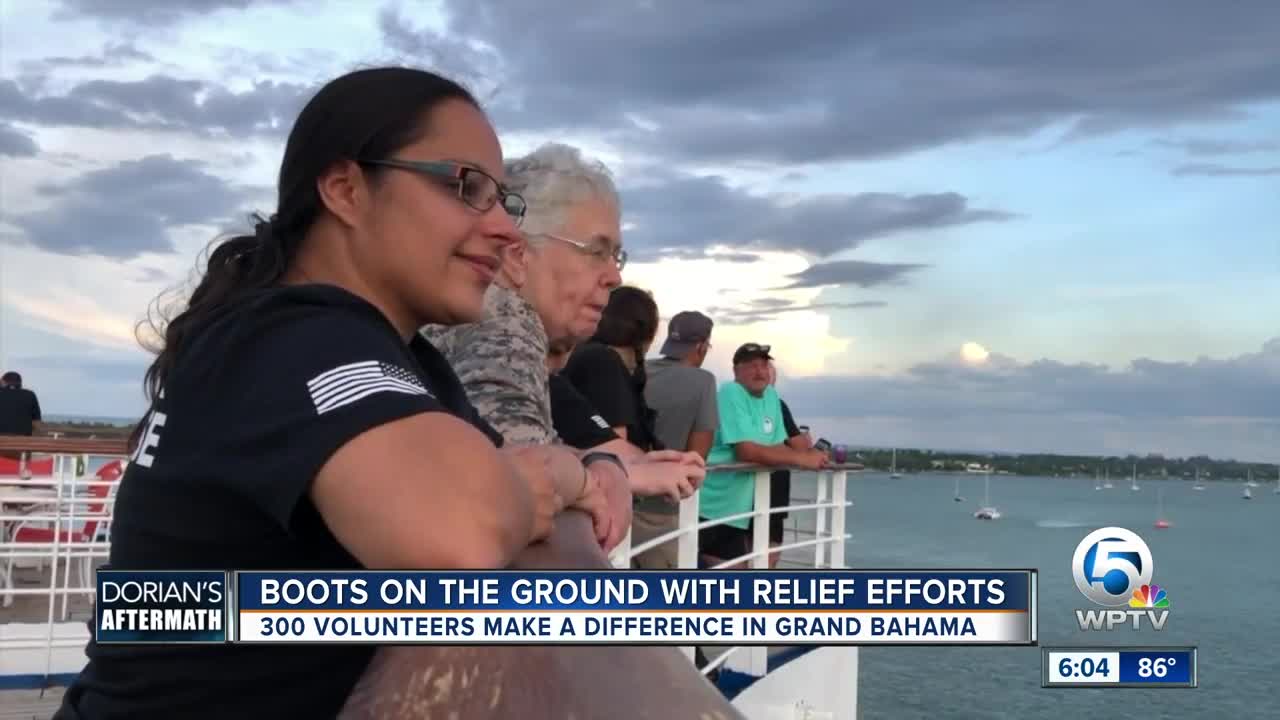 It’s a massive undertaking made possible by local businesses and hundreds of volunteers.

WPTV’s Alanna Quillen was one of those volunteers, experiencing a unique, boots-on-the-ground perspective and seeing first hand where donations are going to help storm victims.

“It’s something that God has put in my heart to do,” said Deb LaForge, a volunteer with Hopeforce International.

That’s the mission of hundreds of volunteers who sailed out of the Port of Palm Beach for a second mission aboard the Bahamas Relief Mission Cruise.

“Whatever it takes just to show people that there is a beginning to a recovery,” said Sgt. Maj. Lance Nut, a retired Marine veteran with Sheep Dog Impact Assistance. “What we really emphasize is going into communities in need and planting what we refer to as seeds of hope. Where a lot of people don’t even know where to begin picking up the pieces, we’ll go in and start showing them how.”

The non-profit Bahamas Relief Cruise formed from the ground up just two weeks ago when Hurricane Dorian struck the northern Bahamas. They organized with two days of the storm and have been using the Bahamas Paradise cruise line — now turned humanitarian ship — as its vessel. The group is spearheaded by members of The Everglades Trust team, along with a collection of West Palm Beach businesses and organizations including Subculture Group, Titou Hospitality Group and the Downtown West Palm Beach Hospitality Association and Mission Resolve.

The ship sailed between Freeport and West Palm Beach as a tourism attraction but now their focus has shifted.

“The Bahamian government is not equipped to deal with this magnitude of a crisis,” said Oneil Khosa, the Bahamas Paradise CEO. “We’re very thankful to help people in Grand Bahama because Grand Bahama is like our home.”

It’s a massive effort that took several hours. Even the crew cabins were stuffed to capacity with water.

With the help of the ship’s crew, we formed a human chain to get pallets upon pallets of water off the ship and into the port.

Once all of the needed cargo was off the ship, we split off into our assigned groups ranging from a medical team treating patients in the community to construction crews helping to clear debris out of flooded homes and rebuild walls.

“They have nothing left. So our mission to help clear everything out so they can start rebuilding,” said volunteer team captain Jonathan Duerr.

The BRC also brought a separate cargo ship filled with 13 pallets of materials to reconstruct the island’s local children’s home, a church and animal shelter, as well as several individual homes.

The food team cooked 10,000 meals on the ship and delivered them to hungry neighborhoods including those in the East End, one of the hardest hit areas on Grand Bahama.

Homes there are flattened and families who have no where to go have little access to basic necessities due to the great distance from Freeport.

I was assigned to supply and distribution, helping to pushing out donations to storm victims. We set up a tent at port and handed out toiletries, food, and water to families.

From there, we packed up two vans to the brim and brought relief to the West End — another isolated area nearly an hour drive from Freeport.

Winter Park resident and volunteer Ashland Vincent is from there. He said it’s been days since anyone has seen water.

“Nothing but mud and dirt, the houses are just completely empty. Just gutted out,” he said. “It’s heartbreaking because this was such a vibrant town.”

We drove upon what was left of Vincent’s grandfather’s home and business. The bottom half where his shop sat is now an empty hollow from the flood waters.

One home after another, we delivered water, food, and diapers and made sure kids were fed.

Many people said they have been sleeping on the floor of what used to resemble their home. One woman was grateful to see relief and something soft to sleep on.

“Thank God our house still stranding up, although everything blew out — it’s the small things. We’re still alive,” she said.

At the end of each day, volunteers put on a movie night for families at Independence Park in Freeport for families to enjoy a break from the post-storm trauma. A hot BBQ meal was cooked on-site, snacks and juices were distributed to kids and a local DJ was hired for the event.

Storm victims told me there is still no electricity to much of the island and no running water. Tensions are also high between residents and the local government over how aid is being administered and distributed.

“I’m hoping that the government will step up and actually help the people that put them into office,” said Vincent.

While this relief ship can’t fix the crisis, it’s a start to help speed up recovery efforts for thousands of Bahamians on Grand Bahama.

“With the smile I’m seeing on everyone’s face, it seems as if they feel hope,” said Vincent.

The group is hoping to make a third, fourth, or even fifth trip but it’s not a cheap effort. It cost $500,000 for this trip and they need at least $1 million to secure more trips, according to officials.

"We need your help to keep this going," said Khosa. "We need able-minded people, like-minded people to get together and keep bringing them volunteers and supplies."

To get involved or to become a volunteer, just visit www.bahamasreliefcruise.org .