Florida 'on the clock' when it comes to reopening, Sen. Marco Rubio says

Senator answers viewer questions on special edition of 'To the Point' 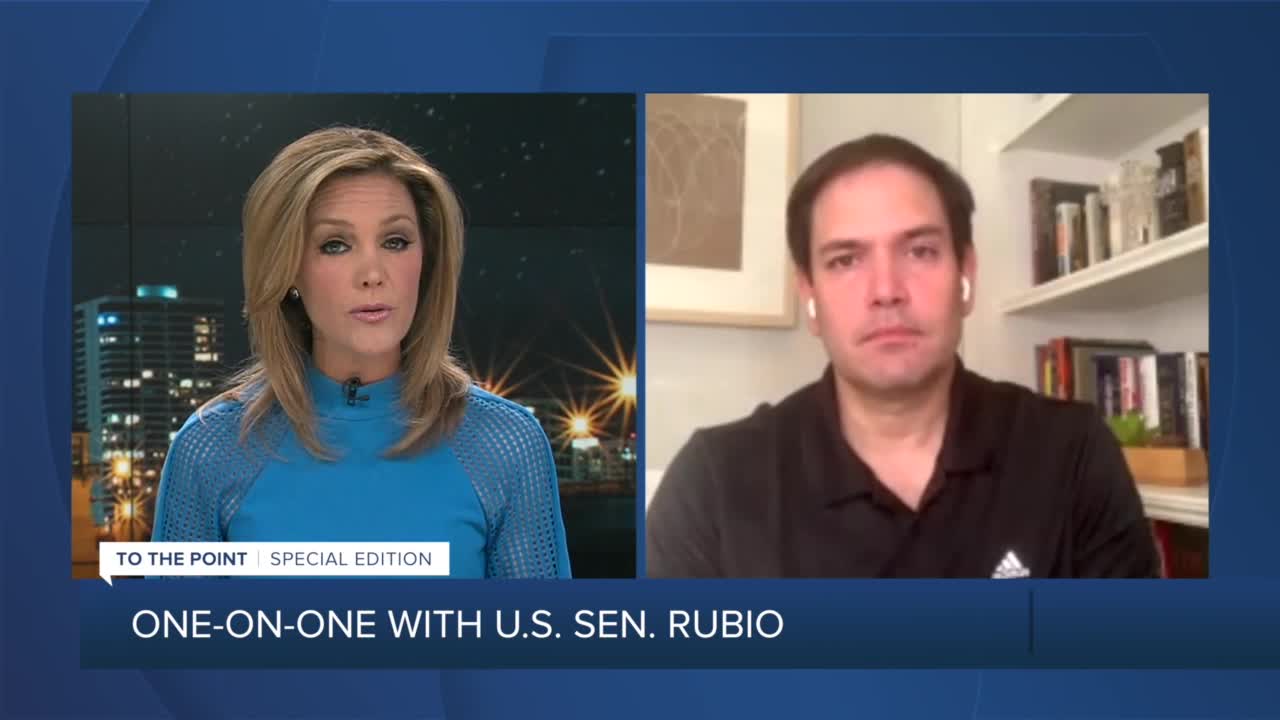 Sen. Marco Rubio speaks to WPTV NewsChannel 5 anchor Shannon Cake during a special edition of "To the Point" about rapid coronavirus testing and how to reopen.

WEST PALM BEACH, Fla. — Sen. Marco Rubio, R-Fla., said Florida is "on the clock" when it comes to reopening.

The senator from South Florida spoke on an array of topics related to the coronavirus pandemic during a special edition of "To the Point" on Wednesday evening, including the best way for governments to reopen and what lies ahead for Floridians who have suffered financial hardships as a result of the closures.

"So let's start by acknowledging that we've never done this before," Rubio told WPTV NewsChannel 5 anchor Shannon Cake. "Not us. Not any other country. So there's really no model to follow."

As Georgia and other nearby states have announced plans to reopen in the coming days, Rubio said he's heard plenty of chatter about keeping the state closed until the coronavirus cases are under control.

"I think, theoretically, that's the right approach," Rubio said. "It's just not a realistic one. Here's what you need to think through and everyone needs to think through: as time goes on, it's going to get harder and harder to get compliance."

Rubio said he believes the longer the stay-at-home orders remain in place, more and more people will begin pushing back.

Sen. Marco Rubio on PPP: 'It was not a perfect plan'

"And that's the reality, and we need to understand that we are on the clock when it comes to public officials to do what we can, because eventually we're going to have to reopen to some degree, whether we want to or not," he said.

Rubio said the best way to reopen as safely as possible is to make sure rapid testing is accessible, that hospitals have a built-up capacity and that there are systems in place to protect the most vulnerable.

"That begins, in my view, with not just the elderly and people with health conditions, but the most vulnerable are doctors and nurses and front-line workers who are being exposed to multiple people with the virus on a daily basis," he said.

The senator also spoke about the lasting ramifications of the government shutdowns.

"Even if we reopen tomorrow to some degree, this economic downturn is going to be felt for months, if not years," he said. "That's the bottom line. It's not going to go back to the way things were on March 1."

Rubio answered several more viewer questions on "To the Point."

Sen. Marco Rubio: "This is unlike any other economic challenge we've ever faced'
Copyright 2020 Scripps Media, Inc. All rights reserved. This material may not be published, broadcast, rewritten, or redistributed.