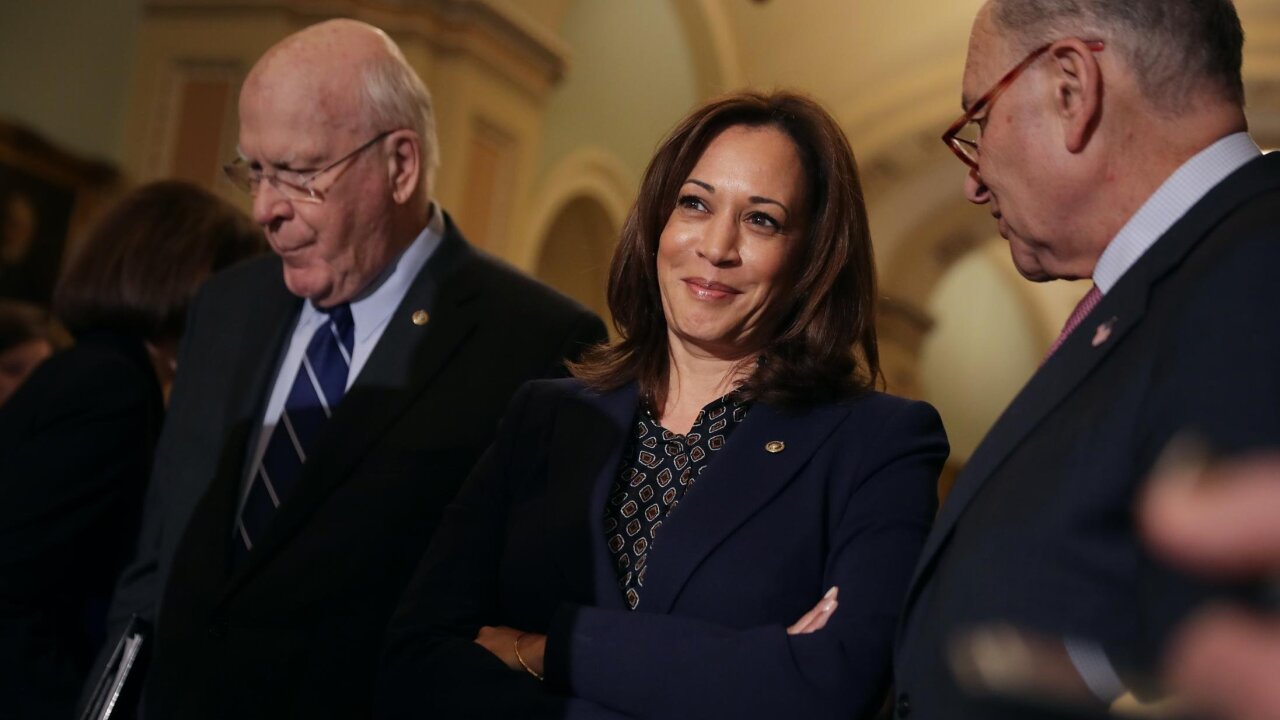 (CNN) -- The 2020 Democratic field is taking shape, with candidates revealing their intentions on a seemingly everyday basis.

Here's a look at the 18 Democrats who have thrown their hats into the ring and announced a campaign or exploratory committee. We're going to keep updating this list through the campaign season as candidates announce their intentions or drop their bids.

KNOWN FOR: Booker, who boasts a Twitter following of more than 4 million people, gained national recognition during his tenure as Newark's mayor, at times answering pleas to shovel residents out after major snowstorms.

KNOWN FOR: Known locally in South Bend, Indiana, as "Mayor Pete," Buttigieg served as a naval officer in Afghanistan. Buttigieg, though a long shot, would be the youngest and first married gay president if elected. He would also be the first candidate to go from the mayor's office to the presidency.

KNOWN FOR: The son of a Chicana activist, Castro served as mayor of San Antonio in 2009, focusing on education initiatives. Castro is currently the only Latino in the 2020 field, but whether he will be the only Texan will depend on former Texas Rep. Beto O'Rourke's decision about making his own bid.

KNOWN FOR: A self-made businessman, Delaney at one point was the youngest CEO on the New York Stock Exchange. Delaney has been running the longest -- he declared his candidacy in July 2017 -- but is still working to gain name recognition.

KNOWN FOR: Gabbard is the first American Samoan and the first Hindu member of Congress, and brings her experience as an Iraq War veteran to the House Armed Services Committee. But she will have to overcome obstacles both old and new, including recent internal campaign turmoil and her controversial secret meeting with Syrian President Bashar al-Assad in 2017.

KNOWN FOR: Gillibrand campaigned as a child with her grandmother Dorthea Noonan, a longtime president of the Albany Democratic Women's Club. The New York Democrat called for former Sen. Al Franken to resign and has acknowledged her increasingly progressive stances on immigration and gun reform running counter to previous positions she held running for the House.

KNOWN FOR: Harris is the daughter of Jamaican and Indian immigrants and grew up attending both a Baptist church and a Hindu temple. Her progressive stances supporting Medicare-for-all and marijuana legalization could clash with her law and order history as a former California state attorney general, including her previous support of reporting arrested undocumented juveniles to ICE.

KNOWN FOR: As the head of Colorado from 2011 to 2019, Hickenlooper helped steer the state through several tragedies, including the 2012 shooting in a movie theater in Aurora that left 12 people dead and catastrophic wildfires and floods in 2013. Before his two terms as governor, he served as Denver's mayor for eight years, after opening a large brewpub there in 1988 that went on to help reinvigorate the LoDo area of Denver.

KNOWN FOR: Inslee, who has held elected office for much of the last three decades, has been an outspoken progressive executive since he became governor in 2013. He has been a vocal opponent of President Donald Trump, including suing the President after he tried to ban immigration from several Muslim-majority countries. Now, Inslee is running as the climate change candidate.

KNOWN FOR: Klobuchar announced her run outdoors as it snowed, which she tied to her commitment to a "homegrown" campaign with "grit." The Minnesota moderate is looking to work across the aisle and win back fellow working class midwesterners.

KNOWN FOR: The child of Jamaican immigrants, Messam is a first-generation American who holds progressive views on immigration, guns and the environment. He was part of a group that sued the state of Florida in 2018 over a law that restricted his ability to create municipal gun regulations after he wanted a new amphitheater in his city to be a "gun-free venue."

KNOWN FOR: O'Rourke, a rising star in the Democratic Party, ran unsuccessfully for a Senate seat in 2018 while serving his third term in the House. With roots in El Paso, O'Rourke gained national attention during his Senate race when a video of him answering a question about NFL players kneeling during the National Anthem went viral. He made an off-the-cuff riff about the civil rights movement as he defended players for making their case "nonviolently, peacefully, while the eyes of this country are watching."

KNOWN FOR: Ryan, whose district includes Youngstown, Ohio, enters the presidential race as a longshot candidate with less name recognition than most candidates and a far smaller political network. He has become most known in Democratic circles for his opposition to House Speaker Nancy Pelosi retaining her leadership positions, though he later voted for her when Democrats elected her speaker earlier this year.

KNOWN FOR: Sanders' democratic socialist platform gained significant traction during the 2016 primaries, when the independent senator who caucuses with Democrats ran against Hillary Clinton. His policy agenda includes various progressive proposals, many of which have been embraced by the Democratic Party, like expanding health care, broadening the social safety net and making higher education free.

KNOWN FOR: The Democrat who represents California's 15th Congressional District enters the race as a long-shot candidate in a crowded field. A frequent critic of the Trump administration, Swalwell has raised his profile by becoming a staple on cable television. He has focused on combating gun violence, and traveled to Iowa in December with Cameron Kasky, who's a survivor of the 2018 shooting at Marjory Stoneman Douglas High School in Parkland, Florida, and a co-founder of March for Our Lives.

KNOWN FOR: Warren was appointed as assistant to President Barack Obama and special adviser to the Treasury secretary in order to launch the Consumer Financial Protection Bureau. She was also appointed to a congressional oversight panel overseeing the $700 billion Trouble Assets Relief Program that was passed in response to the 2008 financial crisis.

KNOWN FOR: Williamson is best known for being a spiritual counselor to Oprah Winfrey and has written several best-selling books, including her debut "A Return to Love." She is calling for "a moral and spiritual awakening in the country" with her campaign.

KNOWN FOR: Yang is an entrepreneur who launched Venture for America, a fellowship program that aims to connect recent grads with startups. He wants to give all Americans a universal basic income of $1,000 per month to address economic inequality.

Decided not to run

Sen. Sherrod Brown (took himself out of consideration on March 7, 2019)

KNOWN FOR: A liberal populist, Brown won three terms in Ohio, a state that has been trending Republican in recent years. Brown would've offered Democrats a candidate who could reconnect with voters in the Midwest. Before deciding not to run, he had embarked on a "listening tour" that included stops in the four key early voting states in the 2020 primary.

Former New York Mayor Michael Bloomberg (took himself out of consideration on March 5, 2019)

KNOWN FOR: Bloomberg hinted at a run for months before deciding against it. He had portrayed himself as a moderate against progressive projects such as Medicare-for-all but with extensive experience and campaign funds to put toward key Democratic issues such as climate change and gun control.

Former Attorney General Eric Holder (took himself out of consideration on March 4, 2019)

KNOWN FOR: Holder served as President Barack Obama's attorney general until 2015. Holder had told several Democrats -- and "The Late Show" host Stephen Colbert -- that he was "interested" in pursuing the nomination, but ultimately he opted not to launch a campaign.

Sen. Jeff Merkley (took himself out of consideration on March 5, 2019)

KNOWN FOR: Merkley, the junior senator from Oregon, has focused on holding the Trump administration accountable on immigration policy, specifically family separations at the southern border. He opted in March to devote himself to his Senate re-election campaign over the next two years.

KNOWN FOR: A former Army paratrooper, Ojeda served for 24 years, earning the rank of major and serving in both Iraq and Afghanistan. A 2016 Trump voter, he focused on school finance reform and issues facing the middle class before dropping out of the race in late January.